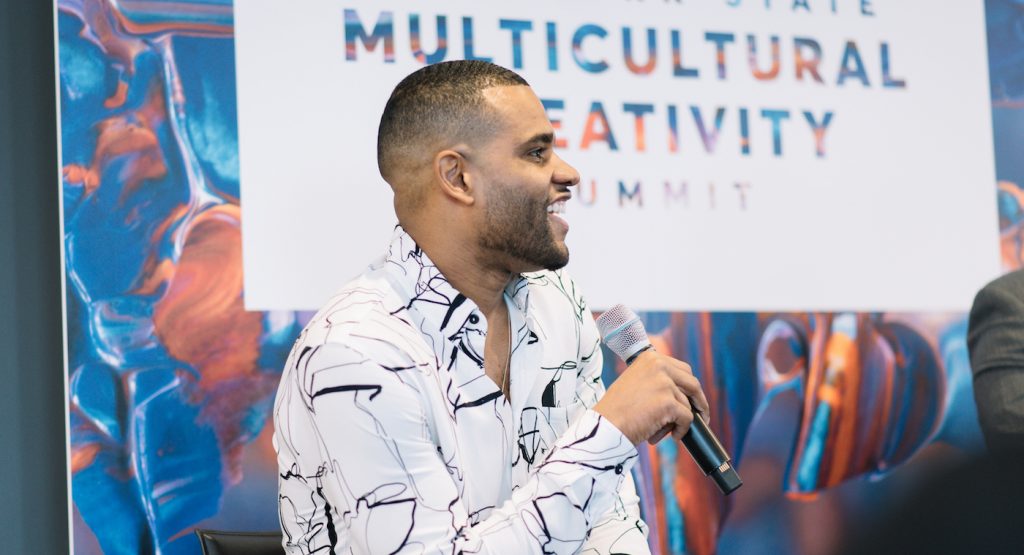 Actor, Writer, and Producer Reggie Lochard on his Passion Project

Actor, screenwriter, and producer Reggie Lochard has a lot going on. He’s currently filming his passion project, “A” for Alpha., which he wrote, produced, and stars in. Last week, Lochard sat down with the Motion Picture Association’s Vice President for Multicultural and External Affairs, John Gibson, at the third annual New York State Multicultural Creativity Summit. The Summit was co-hosted by the Empire State Development, Motion Picture Association, and Ghetto Film School, and hosted at Viacom, and Lochard was on hand to talk filmmaking. Specifically, to discuss how to finance your production.

“I think it’s so important to have an event like that,” Lochard told me. “As a filmmaker of color, it’s a struggle in this industry, for people of various backgrounds, not just black people—and diversity is so important. For the MPA to be so involved, it means a lot to me. The Summit was fantastic. I wasn’t just a speaker, I had an opportunity to sit in on the speakers and hear what they had to say.”

Lochard is a natural listener. He mentioned during his Q&A with Gibson how his writing process includes listening to friends and strangers on the subway. For “A” for Alpha, Lochard is embarking on a project that he says is “very near and dear to me.” Working with director and producer Kelley Kali, Lochard’s film follows a happy couple whose dynamic—she’s the breadwinner, he takes care of the domestic front—works wonderfully until his buddies start to ask questions.

“We live in a society where things are quickly changing. The gender roles are changing, the equality standards are changing,” Lochard says. “Within the last ten years, women have really risen in various industries,” he says. “In 2019, there are more female CEOs and C-level executives then there has ever been in history. That’s a testament to the changing times. This project was birthed from that.”

Lochard describes the moment the idea for the script first came to him. He was at a recently married friend’s house when his friend’s wife asked him to do her laundry for him, and he said no.

“He said that’s stuff that women do. It dawned on me that even in 2019, men still have this archaic mindset of what men and women are supposed to do,” Lochard says. “These two are married, they’re intimate, what’s the big deal if your wife asks you to throw her stuff into the washing machine? But he was adamant about not doing that. This is how many of us have been raised, it’s in us that men are supposed to be the head of the household, and women’s place, traditionally, is in the kitchen, the cleaning, all the domestic things. I wanted to tell a story that challenged that narrative. What if the roles are reversed?”

“A” for Alpha centers on Harrison (Lochard) and his longtime girlfriend Vanessa. Harrison has recently been fired from his job, while Vanessa is a very successful attorney. They live a great life in New York, with a wonderful apartment (no small feat there), all of which is funded by Vanessa. Harrison is an excellent cook, and he whips up meals for them, does the laundry, and handles all the other domestic chores. Then things get complicated when one of Harrison’s friends find his role in the relationship dubious, at best.

“Before I started working on the script, I did research on this theme, and it dawned on me that network TV and Hollywood hasn’t really addressed this narrative to the extent it could have,” he says. “There have been films with supporting characters in relationships like this, but there’s never been a lead in this situation. So when Kelly and I decided to tackle this subject, we were breaking ground here. I’m not looking to solve society’s problems or solve gender norm issues. That’s not the goal. This goal is to start a conversation. I was fortunate that the MPA brought the promo teaser to my film, and the whole audience seemed excited by what they saw. People kept wanting to ask me questions because they were intrigued by the story and the direction we were going for. I’m so glad it got that kind of reception.”

Lochard had started writing the script in March of 2018, as part of a competition in the American Black Film Festival. His “A” for Alpha screenplay eventually made the semi-finals, but he was off working on other projects, including a festival run for his first feature When the Well Runs Dry, which he executive produced and stars in. This was how he met Kelley Kali.

“We kept on running into each other at festivals so we finally decided to speak. She was on her way up, her film [Lalo’s House] was winning every award, and she was looking for her next thing. She’d found out that one of my scripts made the Black List. So she reached out to me and asked if I had any scripts she could consider. I’d already loved her style of directing, so this was an opportunity for us to work together. The original title was The Lunch Date because the bulk of the film was a lunch date that Vanessa and Harrison have and hash out all of their problems, so by the time the date is over you don’t know if they’re going to make it.”

Lochard and Kali met in Los Angeles to discuss the script. She gave him some notes, and he went back and re-worked it. This was when it became “A” for Alpha.

“In the animal kingdom, you can have an alpha female and an alpha male. Only in human nature are men traditionally considered the alpha. Harrison isn’t an alpha in the traditional sense, he’s managing the household,” Lochard says. “What he does allows Vanessa to be successful in what she does. I wanted to show society that there are more ways a man can contribute, there are other things he can do to be a man. I also wanted to ask if being an alpha male means making money? I personally say no.”

As for the lunch date that was the original title, it still takes place, but with Kali’s notes, Lochard explored the relationship before and after this crucial meeting.

“What this film does is show how internally, their relationship is solid. Where they start to have problems is when outside forces begin to negatively impact them. His one friend Joe could never date a woman who makes more money than him. Harrison acts like this stuff doesn’t affect him, but it slowly seeps into his psyche. All of it comes out in the restaurant during their lunch date. This toxic male ego doesn’t fully allow him to accept help from her without feeling like less of a man.”

Lochard’s vision, aided by Kali’s involvement in the project, has attracted a lot of interested parties. Equality Now, White Ribbon and HBO are all behind “A” for Alpha. Soon enough audiences will get to see for themselves what had fired up the crowd at the Cultural Summit.