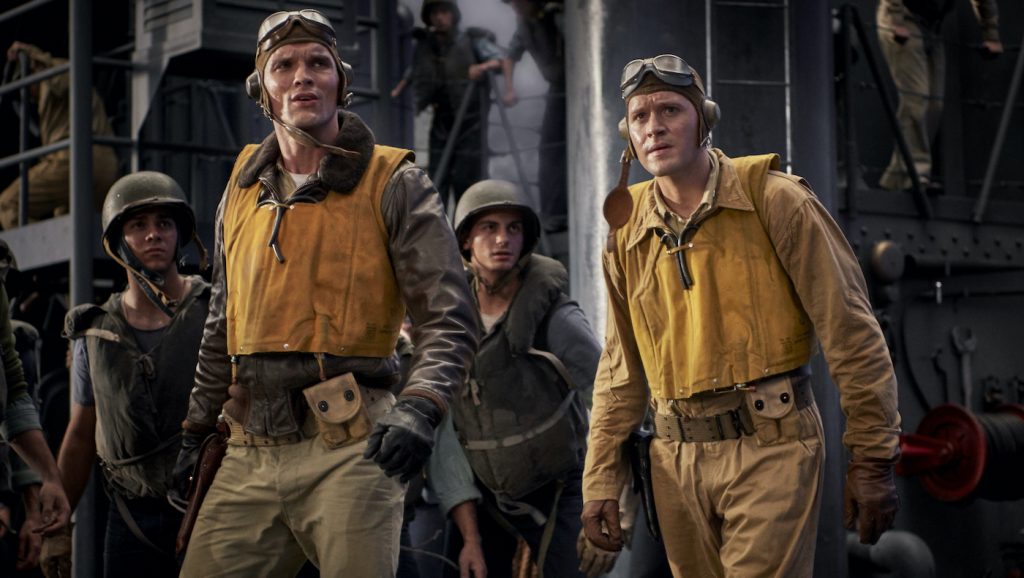 Midway is a stirring tribute to the immeasurable courage of the men we now call part of the Greatest Generation. Premiering on November 8, Veteran’s Day weekend, it is the story of the early days of WWII, from Japan’s surprise attack on Pearl Harbor to America’s first major battle victory in the Pacific, the battle of Midway. The all-star cast includes Woody Harrelson as Admiral Chester Nimitz, Dennis Quaid as Admiral William “Bull” Halsey, and Aaron Eckhart as Lieutenant Colonel Jimmy Doolittle. But the thrilling air combat scenes are at the center of the film, with stars Ed Skrein and Luke Kleintank playing two of the most decorated Navy pilots of the war, Dick Best and Clarence Earle Dickinson respectively. In an interview with The Credits, they talked about their research

Did you create your characters based on the script or did you do your own independent research?

Ed Skrein: I’m always known to go head over heels into my research and leave no stone unturned. I’ve learned from my competitive sports background about the small percentages; the little things that we can learn that make a difference. I went as deep as I could into research with documentaries, audiobooks, podcasts and books on Dick Best, and as soon as I met Luke he was teaching me new things that I hadn’t learned. We pooled our informational resources together and would just sit there and talk about it in between every take and at lunchtime and even when we were having a whiskey on the weekend or whatever. I certainly met my match with research with Luke.

Luke Kleintank: My character wrote a book called “The Flying Guns” and it’s amazing because he wrote a year after the battle so it was fresh in his memory. It was his account; every moment from the beginning to the end.  That was like a bible to me and really the main thing for me.  Norman Jack “Dusty” Kleiss also wrote a book we read, too.

When you see movies that were made in the 1940s, the planes all seem super strong and powerful. But in this movie, we really learn how vulnerable they were.

Why is this movie especially timely now?

Kleintank: The history is super important because we tend to repeat history. I feel like we are doing that now to a degree so I think this movie is going to bring to light these heroes and these men and how united they were in that time and how much pride they had in their country. I would hope it would bring a sense of pride to kids these days, pride to the United States.

Skrein: I also hope it brings a sense of gratitude from young people to this generation. It certainly brings it to my generation. I’ve always known how much the Second World War affected my grandparents, the kind of trauma that they lived with through their personal and very different experiences in the war was tangible, if not talked about, and trauma is transgenerational. Because of the bravery of these men and the sacrifices that happened during the horrors of WWII, we are able to live a life of relative peace and prosperity. Right now we’re sitting in a beautiful hotel talking about a movie peacefully. My children are in London and they are safe. They live in a relatively democratic environment and such so I think gratitude is something that we have to take from the film. But also informed by that gratitude, we have to look at the horrors of war and to never let it happen again, to have more empathy for otherness, for other nations. Hopefully what we’ve done with this movie as well, what I love, is that we portray the Japanese in such a respectful way. What’s affirming for me is we were in Pearl Harbor ten days ago speaking with the senior Navy figures and it was wonderful to hear how preoccupied they are with keeping the peace.

One thing both of your characters do over the course of the movie is deal with terrible losses, and respond to very bad news in a subdued way. That must be a challenge for an actor.

Skrein: I think we’re afforded nowadays the luxury of self-importance; I think that back then these characters couldn’t spend time feeling sorry for themselves. They had a job to do.

Kleintank: If you watch the documentaries of these old men telling their stories now, they all begin to cry. At the moment they didn’t have time to mourn; they couldn’t. The adrenaline was pumping and they had to go back out in the planes. They had to fly. They had to go. The amazing thing about these men, too, is that when they left they knew that they didn’t have enough fuel to get back so they were going to ditch their planes in the hopes that the carrier would find them. To think about that, to make that sacrifice knowingly, that is something else.

Does it feel good to play a good guy?

I felt like Dick Best was at his best when he was in the cockpit in the same way that other than in my real job as a father — that’s where I’m really best — but I’m at my most peaceful most happy, most content, most joyful when I’m on set. So I could relate to that feeling. I think Roland Emmerich’s the same, but he’s the best version of himself on set. It’s just a tragedy when people don’t find where their happy place is or their most effective place is where they can contribute the most.

Kleintank: Clarence Dickinson was the first naval lieutenant to ever receive three Navy Crosses. That’s an incredible honor. During Pearl Harbor, he parachuted out of his plane, he hitchhiked with this couple and he went back to Pearl Harbor and he continued to fight in the battle. He could not be stopped. It is an honor to tell their stories.