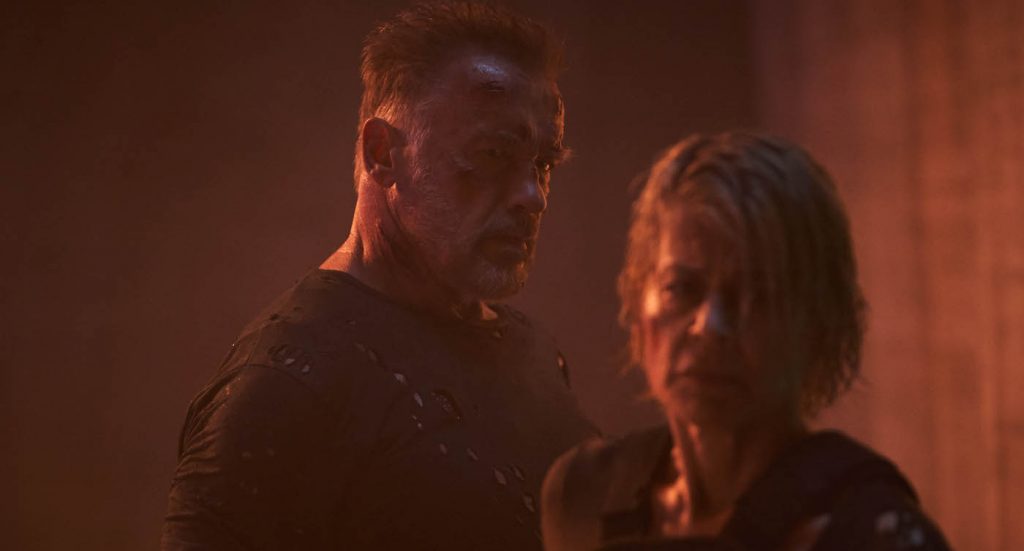 Here’s Everything You Should Know Before Seeing Terminator: Dark Fate

A new clip from Paramount shows us two old frenemies back together again. We’re talking about Sarah Connor (Linda Hamilton) and the T-800 (Arnold Schwarzenegger) getting back to Terminator-killing business in this new Terminator: Dark Fate clip. Perhaps you’ve heard that Dark Fate is the best installment in the Terminator franchise since James Cameron’s game-changing 1991 hit T2: Judgement Day? Perhaps you’re also wondering what you should know before you go see Dark Fate, as there have been a few other installments in this franchise you may have missed?

Fear not, we’ve got you covered. But first, that clip:

So the first thing you should know if you’re curious about seeing Dark Fate but unsure of the particulars, you don’t know to need a ton about the whole franchise to like the film. The two installments you should at least be functional in are Cameron’s 1984 original The Terminator and the aforementioned T2.

Your director of Dark Fate, Tim Miller, had Cameron on board as a (very active) producer. Dark Fate is a sequel to T2, which means the broad strokes of those first two films are important.

The Terminator introduced us to Sarah Connor, a woman living in Los Angeles in 1984 who has no idea that a nefarious artificial intelligence in 2029—Skynet—has sent a murderous artificially intelligent (but not that intelligent) robot back in time to kill her. I mean, who would know that? This robot is, of course, is Arnold Schwarzenegger’s Terminator. Although he looks human, beneath his skin is a metal skeleton. Also sent back in time is Kyle Reese (Michael Biehn), a soldier fighting against Skynet and whose come back to 1984 to protect Sarah.

Here Sarah learns from Kyle that her future son John Connor is actually the leader of the human resistance that is trying to destroy Skynet. Sarah and Kyle end up falling in love. Turns out, Kyle is actually John Connor’s father! Then the Terminator kills Kyle. Luckily, Sarah Connor is a total bad a** and she kills the Terminator by squashing him in a hydraulic press.

Sarah ends the film going to learn whatever skills she’ll need in order to teach her son (she’s pregnant) how to fight the future Skynet.

In T2, we’re now in 1995 and once again Sarah Connor is about to be tested. This time, however, two Terminators are sent back in time. Confusingly for Sarah, the T-800 model (once again played by Schwarzenegger) is actually a good guy. The real villain is the T-1000 (Robert Patrick), a liquid metal, highly advanced Terminator that makes Arnold’s T-800 look dated. The T-1000’s body can morph into nearly anything (another person, a killer sword, etc.) and he’s going to stop at nothing until he kills the young John (Edward Furlong, back in Dark Fate). The T-800 is here to help Sarah and John survive.

Only John’s living with foster parents because Sarah’s been put in a mental institution. It turns out that people think you sound crazy when you try to raise your son to be the resistance leader of some future army against some AI called Skynet. The T-1000 brutally murders John’s foster parents, but the T-800 saves him at the last second and they go off to free Sarah from the asylum.

This time it’s a coporation—Cyberdyne Systems—who starts mucking about and making things awful. Cyberdyne found the destroyed pieces of the Terminator from the first film and reversed engineered them. This breakthrough leads Cyberdyne to eventually create Skynet, which will wipe out most of the planet on August 29, 1997, your titular Judgement Day.

The T-800, Sarah, and John all come together to defeat the T-1000 after some of the best action set pieces of the era. Here’s the catch; they can’t very well leave the T-800 around in case another corporation reverses engineers him and starts the cycle up all over again. So, the T-800 has them lower him into a vat of molten metal and, voila, no more Terminators.

So you’re caught up to speed. The question is how in the world is a grizzled T-800 still alive in Dark Fate, and what brings Gabriel Luna’s new, even more capable killer Terminator back? That’s why we’ll all have to go see the new movie when it opens on November 1, 2019.