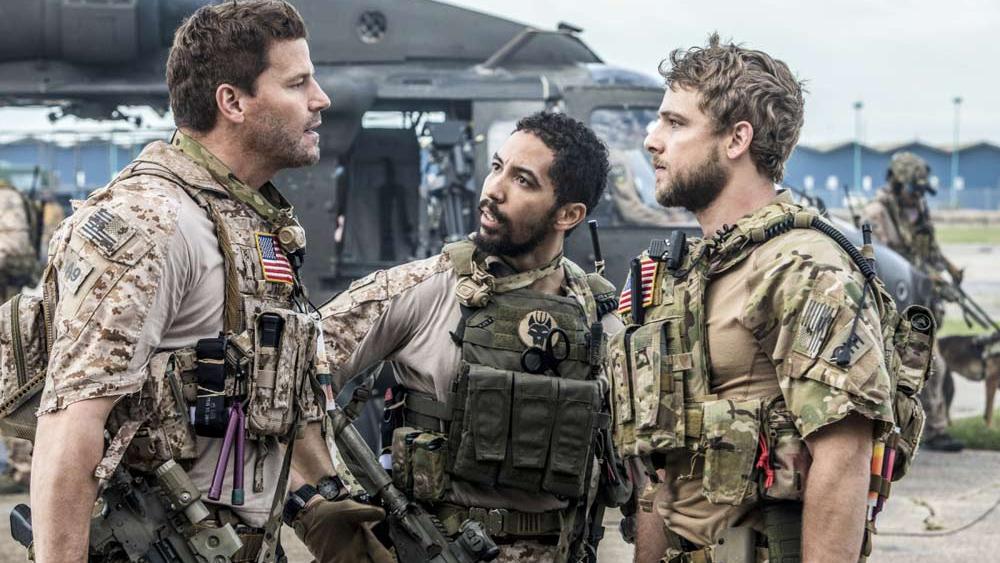 CBS’s SEAL Team, renewed for a third season, takes an authentic and awe-inspiring look at the lives of Navy S.E.A.L.S., giving you a sense of how “they train, plan and execute the most dangerous, high-stakes missions.” Behind the scenes helping to ensure such realism are stunt coordinators Peewee Piemonte and Julie Michaels. The Emmy-nominated husband-and-wife team  — Piemonte won two and was nominated for a third for Southland and Michaels was nominated for Shameless — are nominees once again, for their work on SEAL Team.

Michaels is also a past NCAA gymnast and an actress best known for her role in Road House opposite Patrick Swayze. She and Piemonte, a former football player and competitive bodybuilder who segued into stunt work more than 30 years ago, met at a wrap party.

What’s particularly noteworthy about the show’s stunt coordination, and overall production, is that military veterans are involved. Vets have been hired to not only perform an array of highly technical stunts for SEAL Team, which featured an astounding 935 man-days this past season alone, but also serve as doubles for the lead actors, direct, write and produce episodes, and lend their expertise in other departments like hair and wardrobe.

The Credits spoke with Michaels and Piemonte about working side by side with veterans, receiving their most recent Emmy nod, and pulling off one of TV’s most complex stunts. Edited interview excerpts follow.

How do you work together on coordinating stunts?

Peewee Piemonte (PP): We’ll read the script, break it down and bounce ideas off each other. The coolest thing about it is because we’re a husband-and-wife team, we’re together 24/7. So sometimes we’ll wake up in the middle of the night, have an idea and we’ll start talking about it, or first thing in the morning over a cup of coffee. And then when it comes to the coordinating portion of it, there are times where it might be something that I’m more designed to coordinate, so I’ll be on set. Or sometimes it’s something that Julie’s better at handling, so she’ll be on set. Sometimes we’ll have major gags where pieces of the unit are separated, one person in one spot, one person in the other spot. So it’s a totally collaborative team effort.

Do you do any stunts on the show?

Julie Michaels (JM): Or you need to be able to run over to your performers and be able to say, ‘Don’t forget about this, remember this.’ It’s about safety and the only way we can do that properly is to do one job and that’s to protect the set and its stunt performers.

You hire military veterans to work on the show, which is so very appropriate. Tell me about this.

JM: Our executive producer Mark Owen’s whole idea about having the show was to create an environment, a landscape, where we could hire vets. Instead of saying, ‘Hey thank you for your service,’ we say, ‘Hey, you want a job?’ It makes all the difference.

In the beginning, I thought how am I going to find all these vets that will translate to film. But it wasn’t hard at all. I’ve been on the board of SAG-AFTRA, so I went to the union and they said, ‘Yeah, we have this really great group called VME, Veterans in Media and Entertainment.’ And through that I was able to link up with hundreds of vets, and it just became a labor of love, because one vet knows another vet who might do this. And can I tell you, it just translates perfectly — the way they understand duty, the way they understand the chain of command. It brought all my stunt performers up to even a higher level happily, because of their ethics and their integrity.

Were they perhaps even more receptive given the nature of the show?

JM: Oh, absolutely. You have to realize that some of the people that we had on the show were some of the most incredible military men in the world.

PP: The cool thing is we, as civilians, see the news reports on some of these missions. And we have these guys here. The guys that have worked for us have been on these missions.

Have they advised you in some instances?

PP: Absolutely. We did one episode where one of our guys was stuck in a torpedo tube and we had an ex-member of SEAL Team 6 who’s been on all these missions. He was the guy that worked with the actor hand in hand to get him up to speed, to bring forth his character the way it would be in the real world.

JM: He worked with A.J. Buckley and the performance that A.J. gave was not only incredible, but it was also life-changing for people. And A.J. was able to get there because a) he felt very safe and b) because he had someone who really was there, who really did do it, so there were no ‘kinda maybes.’ It was, ‘It’s like this.’

Do you also work with SEAL consultants?

PP: Our main technical advisor, Tyler Grey, was actually Delta. And then Mark Semos is one of the writers, he was actually a Navy SEAL. Mark Owen, who was our executive producer, was a Navy SEAL.

What are the challenges in coordinating stunts for SEAL Team? Budget, for example, or working on rough terrain or in air and water.

PP: Like you said, the locations. One episode we had a guy jump off an oil rig. So we went out several miles offshore to a working oil rig.

JM: And it was a hundred feet he had to jump in full kit.

What’s been the most challenging scene to coordinate?

JM: The SPIE rig, which is an acronym for Special Control Insertion/Extraction. And we had these guys basically being picked up off of a mountaintop. The SPIE rope drops down and the guys clip in, and this helicopter, a Black Hawk, lifts them several hundred feet in the air. We took a lot of time with that and I know it cost the company a lot of money, but safety was really important. Normally, you always have safety meetings before you do stunts and they usually last about five or six minutes. We did an hour-and-a-half safety meeting because we wanted everybody to have a say, ’til everybody felt like they understood what their job was and when it was going to happen. Then we rehearsed it in gradients. We took them up 15 feet, then we took them up 50 feet ‘til everybody felt that they got it. By the time it came to do the shot, it just went off perfectly.

PP: That particular gag was something we, the stunt team, had talked about wanting to do basically since the pilot because it’s a pretty neat-looking shot.

You’re Emmy-nominated for your work on SEAL Team. What do stunt coordinators look for in nominating their colleagues?

JM: I think it’s variety, showing that you have the capacity to do a plethora of different things that are interesting and new. I think it’s also what did it take to coordinate that. There’s a lot of difference between coordinating a fight and coordinating something like the SPIE rig. It also is just the ‘wow’ factor. The two times that Peewee won, you could hear the audience at the Emmys gasp and that’s what we want. We want the audience to lift themselves out of their seats and feel that thrill, and that’s what makes it outstanding.