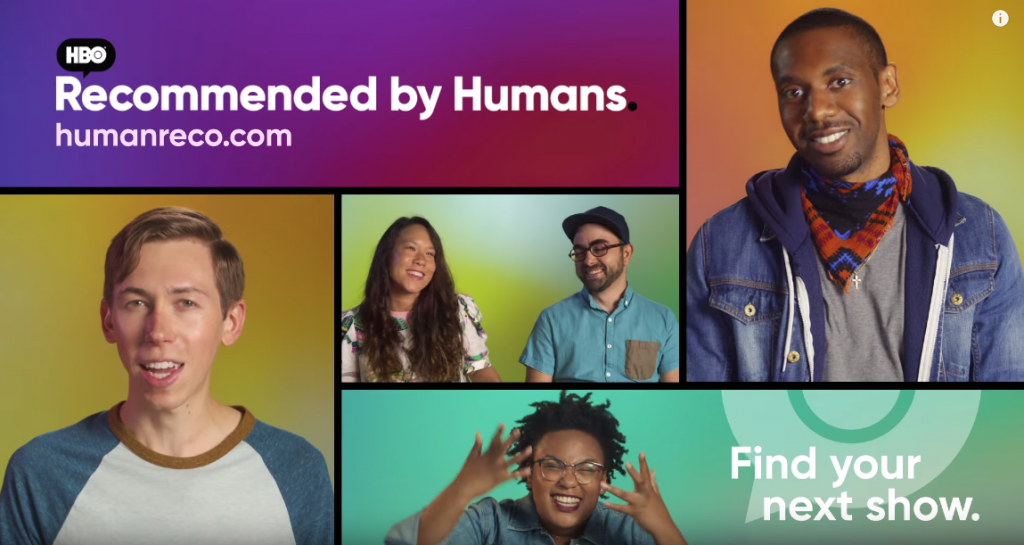 Now here’s a novel concept; imagine getting recommendations for new shows and films by, wait for it…actual human beings? That’s the idea behind HBO’s new program “Recommended by Humans,” which comes with this fairly awesome new website. Regular people (just like you!) offer you their takes on what to watch on HBO, helping you navigate their huge trove of shows, films, miniseries, docs, sports, and specials. Thinking about diving into season one of Succession? These folks can help! Want to know whether Euphoria is right for you? Come on by!  You go to the website (humanreco.com) and you can explore HBO’s programming, and get opinions and recommendations from actual people.

The recommendations are actually quite helpful. You’ll find suggestions for older shows (like Bored to Death and True Blood) as well as takes on current series. These are real testimonials, and the folks making them mean what they say. For example: “Euphoria is one of the most visually stunning, honest, and captivating shows I have ever seen. The ACTING? Phenomenal. The soundtrack? Superb. And it deals with very sensitive topics by showing through the lenses of the ugly truth, so be careful when watching! #feeleuphoria.” Or how about this one: “You should be aware of the amazing performance Jude Law is giving as the Young Pop on @HBO. He brings the goods each episode.”

Here’s the official announcement about “Recommended by Humans” from  HBO:

“‘Recommended by Humans’ celebrates the emotional connection HBO viewers have with the network’s programming and illustrates the power of recommendations from real humans who, simply put, really love television. Fans can join the conversation by sharing their own recommendations on social media using #HumanReco, and should keep an eye on @HBO on Twitter and Instagram for new “Recommended by Humans” content.”

Check out the first “Recommended by Humans” trailer below: