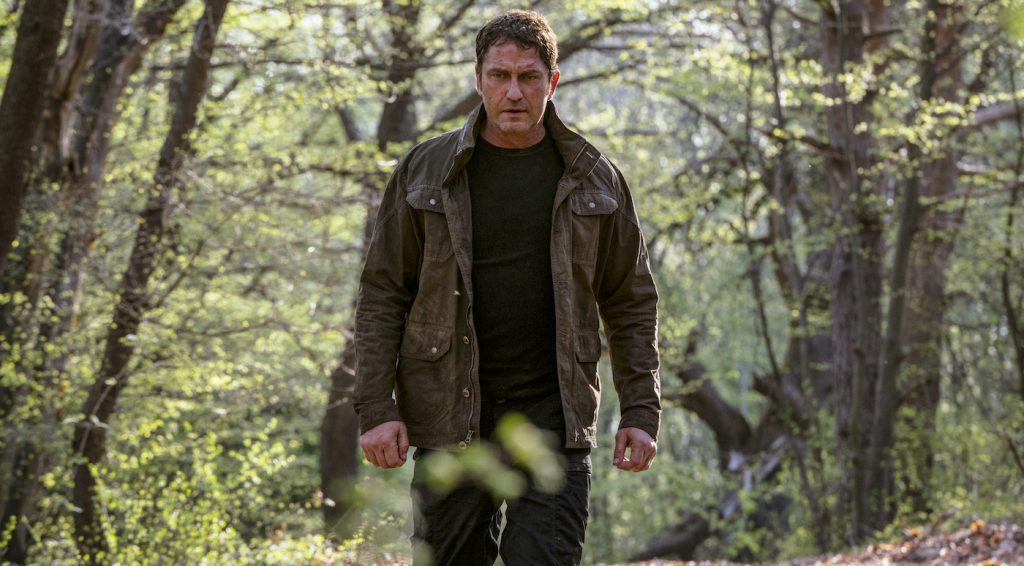 The latest in Gerard Butler’s Fallen series about secret service agent Mike Banning (Gerard Butler) is out in theaters today. This time, in Angel has Fallen, it’s Banning himself who is in trouble when he’s framed in an assassination attempt on President Trumbull (Morgan Freeman). On the run, he hides out with the father who abandoned him, Clay, played by Nick Nolte. The Credits spoke to director Ric Roman Waugh and technical advisor Mickey Nelson, a former assistant director of the Secret Service, about crafting this immensely suspenseful third installment in the franchise.

Ric, this is a more personal story about Mike Banning than the first two in the series. Tell me a little bit about what we learn about him in this film?

Ric Roman Waugh: Gerard Butler and I have known each other for a number of years and been wanting to work together, and we talked about a number of things. And then I got a call out of the blue about doing the third installment of his Fallen franchise. What Gerard wanted to do was to take the action and the spectacle of the first two movies and send it to new directions and basically make more of an origin story.  I love that idea.

So the idea was to not do an event-style plot of the White House being taken in Olympus Has Fallen, or the world leaders being assassinated in London Has Fallen. This movie is about Mike and it shows a day in the life of service. And also the complications that come with that and the heroism and the addictions to the job. You know it’s very much like what our military community or the first responders and law enforcement go through, or even if you think about it, professional athletes.

Waugh: You are in these adrenaline type jobs and you get wired to that to where that is your thirst, and that’s what makes you thrive each day. You will do anything you can to keep it. You will stay in the game as long as you possibly can. And so we meet Mike Banning who is facing the reality that he’s addicted to the job and he’s addicted to that sense of purpose and honor and duty and hyper-vigilance. It comes with being a man who protects one of the most powerful men in the world and who is not ready to hang up the gun. I thought that was a really interesting portrayal to take on, but also to use the premise where he gets set up to go from the number one guy of the president to America’s Most Wanted and turn him into a fugitive. I thought that was a super interesting way to go to see Mike Banning on defense.

One thing we learn about Mike is that his father abandoned him when he was a baby. Is that why he sees the man he is protecting as a kind of father figure?

Waugh: I am really glad you picked up on that. We always felt that Alan Trumbull was the pseudo father to Mike. He’s a man that he’s known through the franchise, and that’s something that you would know if you’ve seen the first two movies, where Morgan started the Secretary of Defense and then he became the Vice President and then the President. And we wanted to carry that and also that sense of that loss of and abandonment that Mike feels of not having a father in his life, and then finally having somebody that can guide him, and also that he respects enough that he is facing the guilt and reality of not coming to truth with some of the things that he’s dealing with when we first meet him in this installment.

Mickey, we talked about being on high alert all of the time and how that’s an important requirement of the job. Is that a handicap in dealing with non-work life, is that something that’s hard to turn off when you are just trying to be present with your family?

Mickey Nelson: I think that’s a great question, and I think everybody kind of has these challenges in their retirement career. Most of the Secret Service men and woman that retire go on to do something else–like now I try to do projects like this, so that is a challenge. Luckily you train all along the way, not just initially when you go into the Secret Service. So I think that really helps you adjust. You realize that you can’t stay on all of the time so you inject, as Ric always talks about, a lot of levity. You will see some levity, in the movie. I use that still to this day quite a bit as you probably have noticed. So that’s kind of what helps me deescalate.

Can you tell me about the use of drones both on and off-screen?

Waugh: When we started doing the research we found that one of the biggest new technologies that they are using is artificial intelligence, and how they’re able to launch hundreds upon hundreds of drones at one time, that all interact with each other like a swarm. They are all working off of AI together. They are using facial recognition and they can be weaponized. This is all real world stuff that we are talking about. So my idea of shooting the drone attack was to make it feel like a real aerial assault, so therefore you are going to use aerial camera work as well. So we use aerial drones to film our guide bombs and to film all of what was going on and as well as a tremendous amount of practical explosions.

The three main characters in the movie all have one thing in common. They are all damaged by their time as warriors.

Waugh: I did a documentary several years ago called That Which I Love Destroys Me. It was after meeting a Delta Force officer named Tyler Gary who was blown up in a battle in 2005 after hundreds upon hundreds of missions. We are in the middle of fighting the longest combat campaign in history, and he was just in the first third of it and already done hundreds of missions. We wanted to bring an essence of that to Mike. He went right from serving in the military straight into the Secret Service, so the only thing he knows is the gun at his hip. And he has a friend named Wade Jennings who is doing everything that he can to stay in the fight as well; he has the same addiction. Then with the Nick Nolte character, you have not only the estrangement of a father that Mike hasn’t seen in decades, but it’s also the idea that they are both damaged by the effects of war. But they are a polar opposite of each other. He meets his son and knows that he sees the damage in his eyes, but his son is not running away from the war; he’s trying to run back into it.

Mickey, what else would you want to see about a film portraying the Secret Service?

Nelson: The Secret Service trains a little bit different than any other protective organization in the world because they place so much emphasis on proactive planning and advanced planning and logistics and contingencies. Not that there is not a lot of real-life reactive training as was portrayed in the movie, but there is a huge emphasis on avoiding having to get in that fight. Now if you get in that fight, by all means, you have to win it, but all things being equal you would prefer to avoid that fight.