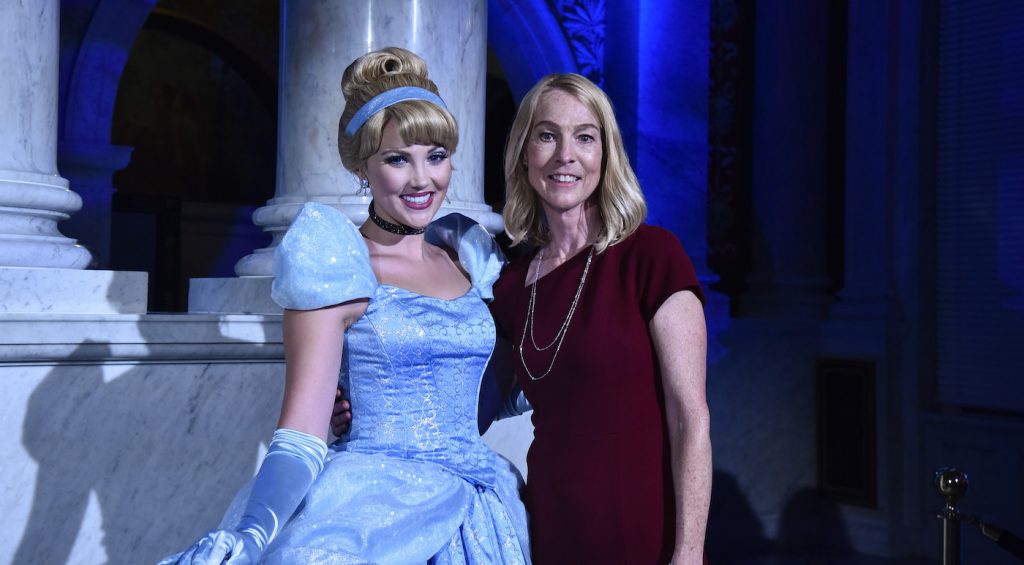 Mary Walsh says she has the best job in the Walt Disney Company, but she might just have the best job in the world – she is the managing director of the Walt Disney Animation Research Library and she oversees the Walt Disney Studios Ink & Paint Department, which was instrumental in the early days of animation. Those are the artists who actually translate the animated drawings to create and the images that as a moviegoer you would see on the screen. She was at the Library of Congress in Washington DC for the 70th anniversary of Cinderella, which was being added to the National Film Registry, a sort of Hall of Fame for classic movies. In an interview with The Credits, she talked about the importance of Cinderella as Disney’s first post-WWII animated film, a return to fairy tales after the shorter, wartime features, and how fans of the fill can hear Walt Disney’s own comments for the first time with the new 70th anniversary Blu-Ray release.

Disney’s archive must be a treasure trove.

The Animation Research Library is the repository for all the original artwork created that is still left in the studio for the production of the animated films, both shorts and feature-length, from the very beginning. We estimate we have over 65 million pieces of original art in our collection. When you think about going back to the 1920s up until today, millions of drawings for a feature film quickly adds up. We are the repository of all that original artwork which is the original IP of the company. I feel really fortunate because we get to work with all of that art and share it with our colleagues throughout the Walt Disney Company and see it used as inspiration and reference for either new stories or new products or new projects that are going on in the company.

What about now when everything is done digitally? Are there still drawings being done?

Yes, we are primarily making computer-animated films now, and so our archive is growing exponentially with the digital drawn artwork, but there are still some artists at the very beginning from a story point of view or concept point of view who draw or create or paint on paper. I think a lot of people have this misperception that the artists can only use computers at the very beginning stage all the way through to the end. The truth is the artists from a conceptual point of view can use any medium they want because they are trying to get across either that character design or their environment design so that the directors and the art directors say, “Yes, that’s the look I want to go with,” and then that all gets translated using computers. There are some artists who start with a stylus and a tablet and there are some people who start with a pencil and a paper, so it is the underlying artistry and the craftsmanship that the artist can use and they choose the tool they want to use to actually create that art.

Do you have a lot of information about who worked on which pieces and how they were used?

It’s very organized. There are thousands if not millions of pieces of paper, especially from a hand-drawn film, that were used to create the movie so you had to have it organized in some way. Animation drawings would be numbered sequentially based on the scene and sequence of what particular action was happening. So they would go in order, the background paintings would do the same thing (they’d have the scene in sequence). They would often have the camera stops and starts noted on the bottom and the background painters would only paint to where the camera was going to shoot. They had to be efficient because obviously on any kind of film production there are budgets both from a dollar point of view and a labor point of view and we had a deadline, we had release dates, we had to make those and so how do you create the most efficient process but still let the artistry come through?  The ability for those artists to show their craft is really impressive. And from a collaborative point of view, it takes hundreds of artists all going in the same direction to get that film up on screen.

I saw one of my favorite Disney artists, Mary Blair, in the opening credits of Cinderella.

I actually think there’s a lot of Mary’s imprint on Cinderella because she did not only character designs but also environmental designs. The opening shot near the beginning of the film when you see the castle in the background, there’s a concept piece that Mary Blair did that is almost exactly that shot in the movie. So there was a lot of her styling that was definitely an influence in the film. You have to see her concept art to connect the two, but she’s an amazing artist and to this day she’s one of the artists that we get a lot of requests for when the younger artists come into the studio.

The fairy tale is a very brief story, and the Disney feature adds a lot of characters, including the mice and Lucifer the cat, whose scenes have a lot of action. Is it the written script that figures out what those very visual scenes will be or is that something the artists worked out?

In the bonus material for the Blu-ray release, there is a new segment they produced called “In Walt’s Words.” They play the movie and then they also have story notes reenacted, notes from Walt, notes from the story artists, notes from the animators with concept art and story sketches and you hear what they were thinking about as they figured out that part of the story and knowing what those side-kick characters can do as far as propelling that story along. So you get an insight into their brains, what they were thinking about. They have actors reading from the verbatim story notes that were taken in the meetings, so when they’re in the story room you can hear what Walt said and what the other artists said. You can see where Walt inserts, “Oh, this funny part that needs to stay, now we need to turn to a more heartfelt point and what is motivating the character and how do we get to the next level.” So it’s really interesting, it’s kind of like being inside the brains and the process of when that film was being made.

Cinderella’s blue gown has to be one of Disney’s most iconic dresses.

Yes, like the ultimate Christian Dior design from the 1950s. It’s really interesting for me because if you think about the time in which this story takes place in the 19th century, 1800 – 1840-ish, but yet it was made in the late 1940s and released in 1950, so the design aesthetic that they chose is influenced by that particular time period in France but also the reflections of the artist working in the late ’40s to early ’50s. So her hair, the style of her gown, reflect both eras.

What did making Cinderella represent for Disney?

Cinderella was the first feature-length film that they did after World War II. The idea had come up earlier. It was a film Walt wanted to make but because of the war effort, all that got put aside. From a financial point of view, they needed a hit because they needed to rebound from the war years when they lost the entire international market. That was one compelling reason for Walt to make a fairy tale again. I don’t know if it was a technological challenge but I know for them it was an emotional one.