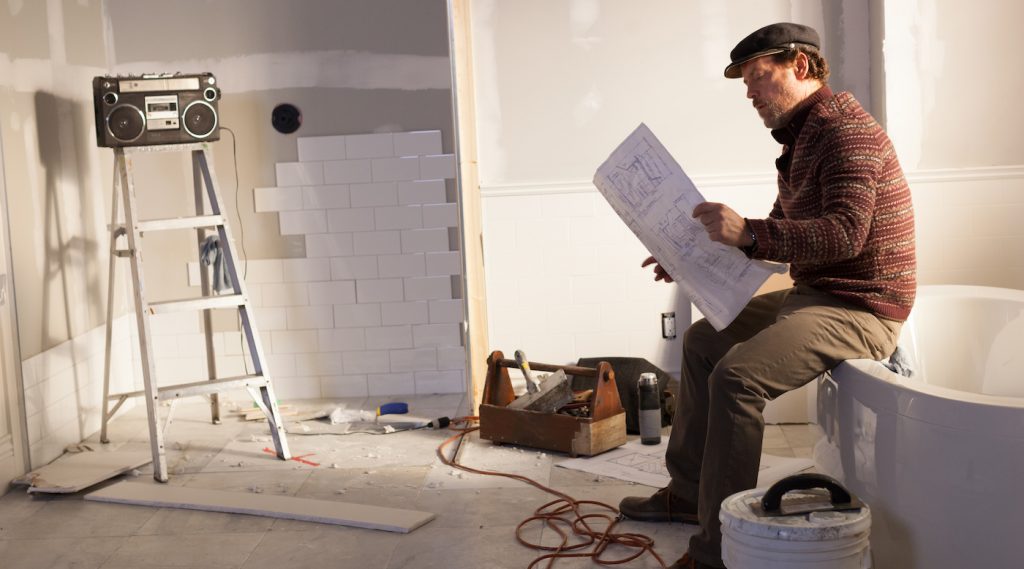 For his first time helming a feature film, actor Greg Kinnear picked a dark comedy centered on a depressed dentist experiencing a mid-life crisis. Phil is also struggling to understand why one of his patients, seemingly with everything to live for, takes his own life.

It was an especially demanding undertaking, given that Kinnear also played the lead role. But armed with his vast experience on screen, lessons learned watching the many renowned directors he’s worked with, and a talented all-star cast—Emily Mortimer, Bradley Whitford, Jay Duplass, Luke Wilson, and Taylor Schilling—he’s proved himself successful at the task.

The Credits chatted with the Oscar and Emmy nominee about choosing Phil for his debut behind the camera, treading the line between comedy and crisis, and directing “that actor Greg Kinnear.” The following interview has been edited for length and clarity.

How long had you been thinking about directing a feature film? And did you have a particular genre in mind, or was it going to be with whatever struck you?

It definitely had to be something that struck me. There were a few movies and a few scripts that even led to a few table readings that never panned out, and my heart was just never in it. I never felt like I had connected with the material. Look, I can’t tell you how fortunate I am to have gotten to actually make a movie, so I don’t say this out of any sense of arrogance. I mean the truth is it’s more out of ignorance that I just thought, well, I have to wait until something strikes me just right! But this did. It just really did. I felt like it had a kind of life-affirming quality to it and yet it was framed in the world of a suicide, which is something that had kind of touched me indirectly in my life. And I just thought, wow, that’s an incredible feat that [writer] Stephen Mazur had pulled off there, and the movie kind of stayed with me. And then some really great actors jumped in to say that they’d join me.

What were the main challenges in keeping this story from becoming too maudlin, while also not minimizing or trivializing the traumas of depression and suicide? Humor is incorporated so well in this film.

Thank you. It’s a funny thing that you only learn it after you direct, is what could have been or maybe what should have been. And you never really get to see that movie. I suppose if you have the luxury of going and shooting for 200 days, you’d probably have a million different movies you can make out of that. We didn’t really have that. We, Stephen Mazur and I, had to really work on the script, because with these small films you have limited time and budgets, and you have to have committed to a tone and to an idea before you get there, or it just seemed to me it was going to be trouble. So I just tried to follow an instinct of what I thought was funny, and yet I wanted to be respectful of anybody who has had this touch their life and not feel like we were crossing a red line. So it was a bit of a balancing act.

I like that the story doesn’t take the expected or typical route with the two main characters, and considering its themes, the film is uplifting at the end.

Yeah, I felt so, too. Like I said, I felt like it was a life-affirming film about death, which is a rare bird. And obviously there are all the trappings here of a romantic comedy in a way, but you dare not go there, because that was also a zone that was I felt very dangerous. It would not be truthful to the story and it would just create all sorts of problems. But you do feel a friendship and a great bond formed between these people. Where that goes, or where that ends up, is left for the audience to imagine.

So, directing is in itself a big commitment. Why choose to direct yourself the first time out?

Boy, I’ll tell you, that was just again out of sheer ignorance. I just didn’t think it through very clearly, and I thought that aspect would be more manageable than it was. It was really, really hard. There are so many great actors who I love, who I think could have played Phil so great and probably better than me. It would have been great to sit on the sidelines and talk them through what I think we needed to slightly change and nuance. The truth is that movies are really hard to get made, people have got busy schedules, and I knew that Greg Kinnear was always available as an actor [laughs]. I had that guy whenever I wanted him. And honestly, that was valuable, because it was like threading quite a few needles to get busy actors to come and pop in for this movie at various times. But I knew I could just always kick this Kinnear guy around and make him bend over whichever way backward I needed him to in order to make it all work. And so I guess it was part of just out of necessity.

What was your first day on set like as director? Were you nervous?

I was pretty tired because I hadn’t slept for like two days before. I’m nervous enough when I start a movie as an actor. I’ve had the luxury of working with so many great directors. I started with Sidney Pollack, and I worked with Nora [Ephron] and Jim Brooks. They’re all so wonderful, setting the table and walking in magnificently onto sets and making great creative choices, and I had none of that skill set as it turns out. But I have a good work ethic and I had worked very, very hard getting us there. I knew the script, I’d worked on it for a year, so I knew the story very well, and I felt like, you know I can handle this. But obviously dealing with a crew, you’re suddenly facing a hundred people and they’re looking to you. I had John Bailey who shot As Good As It Gets as my DP, who obviously is a very seasoned director of photography — he’s now the president of the Academy, I only have presidents shoot my movies [laughs]. I had such a professional group of actors and good crew up there that a lot of the heavy lifting was done for me and people were kind. Couldn’t have done it without them.

I saw in your end credits that you thank Sam Raimi and Ira Sachs.

Well, Ira and Sam are friends and they were nice enough to watch early cuts and just offer ideas and kind of help me with any questions I had, both going into this and just in terms of the postproduction process. We had an excellent editor, David Rosenbloom, who edited the film and really was great in helping me find a tone that worked for me. Knowing some people who do this really, really well saves you a lot of pain. Listen, there are things I would do differently if I had another shot. There are things I’ll have learned from this process for sure.

Will you direct yourself again?

I wouldn’t mind having a role in it, but I sure wouldn’t like to have as big a role in it. But the truth is if I had something that I came across that I felt like I was genuinely right for — I did feel like I was right for Phil, so I do need to qualify that. But yeah, the burden of directing the lead, who is you, that’s a pretty big bite to take. It would be a great process to not have to deal with. You know, leave Greg the actor at home and just focus on what was ahead of me. I’d like to find something else. It took 20 years for me to find Phil, so it could be a while. I’ll be about Clint’s age when I direct next.