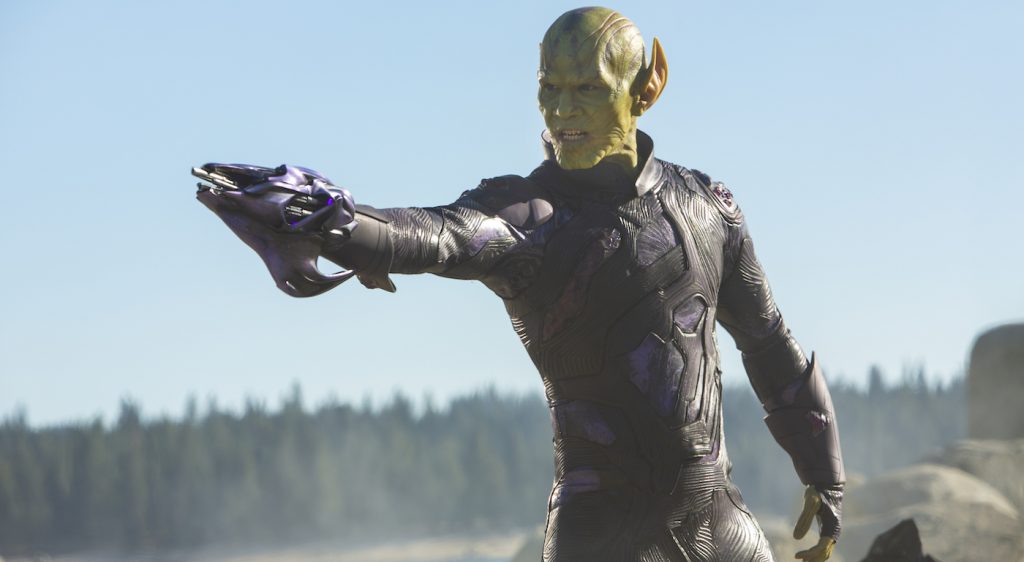 Directors Anna Boden and Ryan Fleck made a lot of bold choices with their excellent Captain Marvel. In fact, the film was filled with fun twists, clever Easter Eggs, and narrative turns to enliven this origin story into something stranger than you’d expect. Yet no choice was as bold—or surprising—as their decision to make the shape-shifting Skrulls the good guys. The entire marketing campaign was essentially a deft fakeout—we were led to believe these reliable villains from the comic books would be the main baddies in Captain Marvel. Boden and Fleck even recruited their Mississippi Grind star Ben Mendelsohn, one of the great character actors in the business, to play Skrull leader Talos. Mendelsohn had to be the film’s main villain, he’s so good at being bad! Then the film actually came out and the major plot twist was revealed—the Skrulls were simply trying to get away from the Kree and live peaceably on some distant planet. Carol Danvers (Brie Larson) had to contend with the fact that her own people (she’s half Kree) were the real villains.

Now that Captain Marvel is out on Blu-ray, we’ve got commentary from Boden and Fleck on this fateful decision. Boden explains the rationale for making Talos a sentimental figure. The scene in question is when Talos is finally reunited with his family, who have been hiding on a ship in space:

“This is another one of those scenes…that’s kind of the heart of the movie to me,” Boden said. “Carol finds her humanity in that scene and we really see the humanity of the Skrulls…and it’s like these pointy-eared, weird looking shape-shifting aliens that we assumed were the villains for the first half of the film open up our hearts. We see that they have families and they care about the same things that we care about, [and] that was one of the really exciting things about this movie for us…taking these Skrulls, who are the villains from the comics, and being able to see another side of them, and then her reckoning with warring with these people who she didn’t understand and was fighting on the wrong side of the war”

The result of this twist was a sense satisfying vertigo. You had to look back over the first half of the film and rethink every scene. Now that Boden and Fleck have successfully made the Skrulls likable, who knows how these “pointy-eared” aliens will be used in phase 4 of the MCU.

For more on Captain Marvel, check out our interview with editor Debbie Berman here.