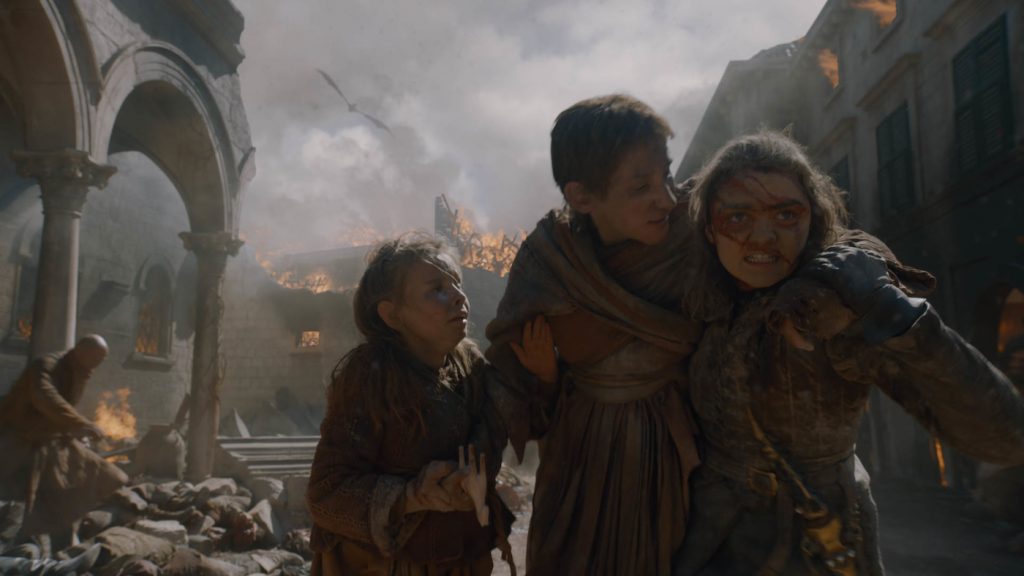 Director Miguel Sapochnik and cinematographer Fabian Wagner have worked together on four of Game of Thrones most ambitious episodes. The two teamed up for season 5’s skirmish with the Night King, “Hardhome,” season 6’s muddy epic “Battle of the Bastards,” this season’s Battle of Winterfell in “The Long Night,” and finally, last night’s shockingly horrific “The Bells.” While everyone had understandably assumed that the battle with the Night King would be the marquee war episode, it turned out that “Two Bells” was the more terrifying depiction of combat.

The most obvious reason last night was so disturbing was watching Daenerys Targaryen become the tyrant she has always insisted she was trying to ride the Seven Kingdoms of. With the Iron Fleet reduced to smoking flotsam and the Golden Company little more than gold plated molten armor, Dany sat atop Drogon over a King’s Landing that was now hers. Then the Lannister army laid down their weapons and the bells of surrender were ringing. All Dany had to do was take her throne. Had she wanted to fly off to the Red Keep and burn Cersei to ashes, nobody would have blamed her. Instead, she snapped and laid waste to the entire city and the tens of thousands of innocents screaming and running for their lives on the ground. It was horrific. What made the action all the more unbearable was the brilliant choice Sapochnik and Wagner made in framing the carnage.

The moment Dany decides—or succumbs—to torching the entire city, we are no longer with her. Literally. The camera never again takes her perspective from atop Drogon. Instead, Dany and Drogon become one, a malevolent, flying goddess of death, who we see from the ground up. We now share the POV of all those terrified people running and dying in the streets. This decision to turn us, the viewer, into another rattled subject in Dany’s campaign of terror gave the entire episode an unnervingly visceral charge. Buildings exploded and toppled to the ground all around us. People died—horribly so—in flames and under the falling tonnage. You could never be sure where or when Dany/Drogon would strike next. She was rendered all-powerful, merciless, ubiquitous, godlike. The Dany we had grown to know, and at times love and respect, was gone. In her place was wrath incarnate, with wings and fire breath. We were all Tyrion, looking upon the destruction of King’s Landing with more or less this exact expression:

You can say what you want about the decision to turn Dany into the Mad Queen. I certainly have some feelings about it. But the skill with which this episode was shot was undeniable. It was more relentless and far more unsettling than watching the seemingly infinite hordes of the undead assault Winterfell. It was a claustrophobic depiction of the terror of war, and the toll it takes on ordinary people. Dany and Drogon were a one-woman/one-dragon air raid, pitiless and inhuman. The characters that witnessed and survived her onslaught will not be able to forget it or claim that what she did was necessary.

The episode made me think both of the destruction of Pompeii—especially that shot of the mother and children frozen, by fire, in a poignant, final embrace, and the atomic bomb. My friend kept marveling at how horribly potent Drogon’s fire was, and I agreed. We’d already seen countless people torched by dragon fire at this point, but never on this scale, and never from this perspective. It made me think of J. Robert Oppenheimer’s remark after the first successful atomic bomb test. Witnessing the terrible power of his creation, Oppenheimer said he was reminded of words from the Bhagavad Gita, “Now I am become Death, the destroyer of worlds.”

While Dany might not agree that she is now a destroyer of worlds, her actions in King’s Landing speak far louder than anything she might say in the finale.