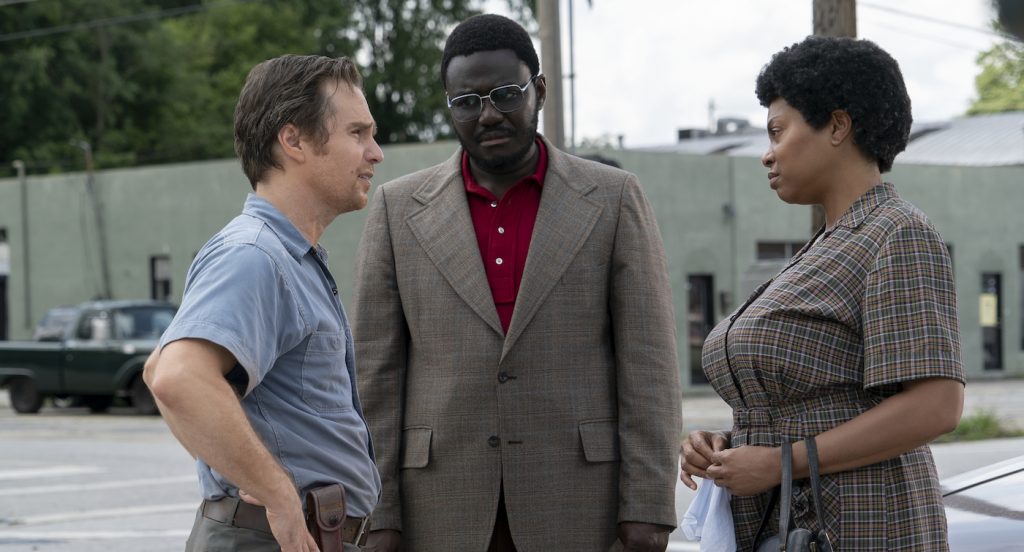 Taraji P. Henson & the Team Behind The Best of Enemies on Crafting History

The Best of Enemies is based on the true story of an African-American activist named Ann Atwater and a KKK official named C.P. Ellis who were forced to work together in a fight over school desegregation in 1971. In an interview with The Credits, star Taraji P. Henson, who plays Ann, writer/director Robin Bissell, and producer Dominique Telson talked about bringing this potent true story to the screen.

Taraji, we can see so much of Ann’s life and personality in her posture and the way she walks, and it is very different from what we’ve seen in your other films.  How did you develop that?

I knew that this was a woman who moved with purpose, a woman who was rooted in the Earth. And I look totally different than her. I couldn’t gain the weight because I was just coming from Proud Mary, and right after Best of Enemies I had to fly right back to be Cookie [in Empire], so there was no time for me to organically gain the weight—which I would have enjoyed.

So the wardrobe people made me a prosthetic suit and when I came down to Atlanta to try it on the boobs look like they were my size. I was like, “No, you need to call Tyler Perry and ask him how Madea’s boobs are made. I need that.” I needed the boobs to be heavy is because I needed to walk differently. Once I put that suit on and that wig on, it was just like instant Ann. A security guy who I just hired in Boston when I was on Proud Mary came down right after that and he wasn’t used to seeing me as Ann. And the first day when I walked in my trailer and I came out, he was like, “Who are you?”

What did you learn about her in researching the role?

The film started with her fighting a slumlord. She worked at Operation Breakthrough and she was an activist for her community. And then the school burns down and then it becomes about integrating the schools. I did the research so I knew what she stood for. She was selfless. And this woman was poor so you don’t have to have a lot of money to make change. You just have to be passionate about change and you have to fight for it, and wow, did she.

There is probably no subject more sensitive in movies than black people and white people teaching each other to be better people, even if it’s a real-life story. How did you make sure it was handled carefully?

Dominique Telson: We didn’t have to do anything. It was Ann Atwater—she was the one that fought. She was rough and outstanding so she was the one that was bound and determined to fight this guy, C.P. Ellis. She was the one that had to change her tactics and adjust so that she could accomplish a greater goal, getting the schools that she wanted for her children. She did that by putting her heart into it.

Ann was the one that when no one would buy from C.P. any more in this community, she organized to help him, too, because that’s what she does. She got the people there and she saved his livelihood, and then she changed the trajectory of his whole life because now he became a labor activist instead of being a part of the KKK. She is an amazing woman.

Henson: And she stopped a generation of hatred within his family, and that trickles down to his kids and his grandkids and their great grandkids.

Robin, did you get to talk to Ann about her experiences?

Robin Bissell: I was able to spend about three years with Ann before she passed away. I met her in 2013 and she was something. Her perception of C.P. was really important for me. He was a racist and he had been taught to be racist and he had those feelings in him for sure. But he was proud of the Klan or his stature in the Klan for different reasons. It wasn’t just the racist ideology. It was that he belonged. He was somebody.

Taraji has talked about this. Inclusiveness is so important for us, we just want to belong. When hate groups or white power structures sense that you want to belong, they are very manipulative.

Ellis and Atwater participate in a dispute resolution procedure I’ve never heard of before, called a charette. How did that come about?

Bissell: I had never heard of it before I read the book [by Osha Gray Davidson] and then spoke to Bill Riddick [the real-life consultant who led the community through the charette] about it. But in subsequent years, any time someone asked me, “What’s the movie about?” I tell them about charette. It’s a French term that they use in architecture, whenever there is an issue with the planning of a building and the land use, they would stick the two opposing sides together in charette for seven to ten days and made them come out with a solution. Bill Riddick says that’s a good tool for what we are going through in this country, so he just adapted it from architecture.

What made Ann Atwater such a passionate, fearless advocate?

Henson: Her living conditions. It was out of desperation. And she was chosen. Everybody doesn’t have it within them to lead. It’s just unfortunate that in this world today we have so many followers—pun intended—through social media.

Bissell: I agree with that. I read social media all day and I read the newspapers all day, I try to be as informed as I can because I have that kind of life. A lot of people go to work 12 hours a day, they get home and they have dinner with the kids and they have like an hour to watch TV or go online and all they do is get what everyone is telling them. So that’s why it’s so important that our leaders are tuned into something that’s going to help humanity rather than divide humanity.

One touching moment that becomes a turning point in the film is when Ann helps C.P.’s disabled son.

Henson: She’s a mother, and what mothers don’t understand having a special child and you just want to care for them? At that point, she saw him as a fearful parent. That child’s safety was really out of his hands. He couldn’t really control it, and there is something heartbreaking about that. As a parent, it can tear you down because all you want to do is protect your children. She identified with that. What mother wouldn’t try to help another parent protect their children?

Henson: Once I understood her psyche I was able to throw stuff in there, like the Klan robe, when the little black boys came out and they try to rip up the robe and I was like, “I’m going to tell your father!” That’s back in the days when it took a village to raise children, that’s where she came from. I grew up in those days so I understood that if you did something bad outside, any parent that caught you was allowed reprimand you. That’s who she was, whether it was boys getting into trouble or C.P. Ellis.