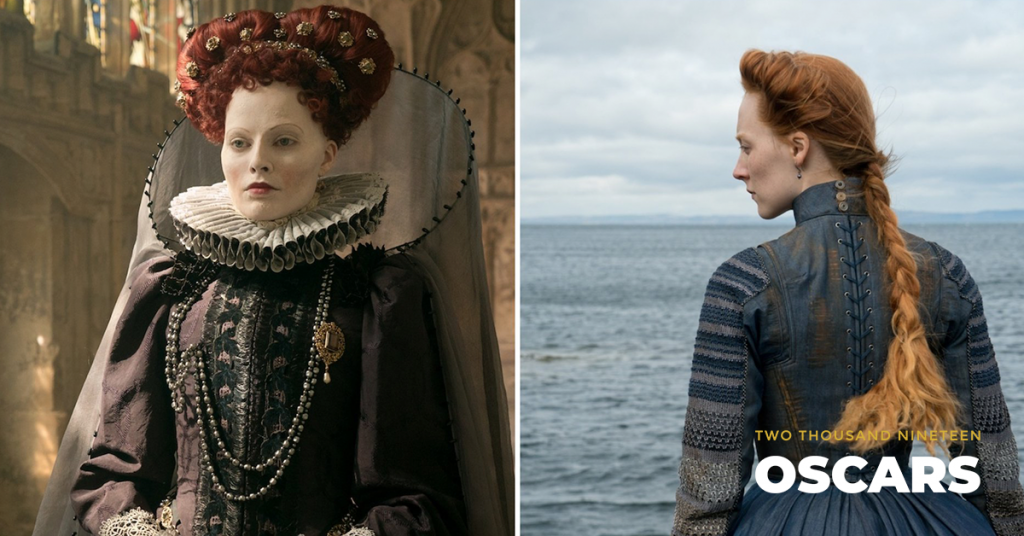 Mary Queen of Scots is a gorgeous film to behold, with the dueling Queens looking period-perfect from head to toe. “You’ve got two queens, two powerful women, two women who have never met,” hair and makeup artist Jenny Shircore told us. “Yet they’re influenced by each other’s beauty and power. They are jealous of each other, afraid of each other, all the way through this is the story we’re telling. When Mary Queen of Scots arrives, she’s an immediate threat to the English throne.”

One of Shircore’s fellow artists, costume designer Alexandra Byrne, was key to re-creating the look of the 16th century, in which Mary Stuart (Saoirse Ronan) returned to Scotland and posed an immediate threat to Queen Elizabeth I (Margot Robbie)’s throne.

“We might not be doing Brexit if those two stayed together,” Byrne joked about what could have been had the queens figured out a way to share power, or at the minimum rule independently of each other—neither was possible, however. What was possible, thanks to Byrne, was giving the queens their indelible looks, which were not only based on historical precedent and extant portraits of each but their respective countries climates.

“I liked to research a period so that I understand the clothes and the history and how people lived,” Byrne says. “This is necessary, so I can make reformed choices to tell the story, what it would have been.”

What you’ll notice about filmmakers like Byrne is, she not only understands her role in creating the look of everyone we see on screen but becomes intimately involved with the storytelling process itself, threading her costume design into the broader themes of the film.

“The background to their story is their journey to becoming queens,” Byrne says. “It’s the story of what they learned and how they maintained power. Mary was very pragmatic when she came back from Scotland to France; she arrived in mourning—stripped of jewels, title and her whole life. Scotland was an impoverished country, the monarch didn’t have a standing army, the army they did have was from the lords, and money and family ambition made it an incredibly unstable country. Mary’s journey was a question of, ‘How do I make this work?’ Throughout the film, her clothes are evolving, yet are based on how the climate [in Scotland] is very unpredictable, and she’d have to adapt to living in the word. Her clothes develop out of the sequence of events.”

Meanwhile, some 400 miles south, Elizabeth is no shrinking violet, but rather a shrewd, smart woman, decked out in royal finery with a keen grasp of just how precarious her situation is.

“Elizabeth was very well educated, and she learned to be strategic at a young age,” Bryne says. “She was declared illegitimate at a young age and was sent to the Tower, but as a queen she had the stability of wealth, and was at the top of a pyramid of power, dealing with very astute politicians and spin doctors.”

Unlike Mary’s looser, more tribal court (her Catholicism was a significant issue for the Protestant lords in Scotland who viewed her as illegitimate), Elizabeth’s court was the picture of prosperous stability, thanks to Byrne. “It was quite a sophisticated, well-tuned court,” Byrne says. “Elizabeth always exercised public relations; she understood the power of her Protestant image in replacing the icons of Catholicism.”

One of the film’s most vexing issues was how to present Elizabeth when she contracts smallpox, a disfiguring and often fatal disease in Elizabethan times. What was worse for the queen was that while her beauty was ravaged and she took to hiding behind a veil, Mary’s beauty was talked about all over the continent.

“The pox has never been seen before,” Byrne says. “Meanwhile, Elizabeth had written reports of Mary’s charisma and beauty. We did a lot of research on smallpox and learned it was an incredibly disfiguring disease. We wanted to show how she’s hiding from the world; she’s gone AWOL. She did this for her dignity because she didn’t want people gazing at her, so she limited who was allowed in her chamber. The veil she wears gives us a moment of understanding her pain.”

Meanwhile, the men in the film are constantly jockeying for power, filling the queen’s ears with plans, plots, and very often lies. Whether it’s the doom-and-gloom Protestant preacher John Knox (David Tennant) telling his flock that Mary is the devil incarnate, or Elizabeth’s number two William Cecil (Guy Pearce) urging her to instigate a civil war in Scotland, Byrne worked hard to show how the queens had operated in a male world.

“The men are interesting because one of the things I wanted to do with this film is show how these two queens maintained power in this male world,” she says. “I wanted to make them sexy, but the Elizabethan era is not sexy, so I took things into denim; I wanted the clothes to be accessible, yet serious. The men didn’t have dry cleaners, and they lived in their clothes, which got wet in the rain, they sweated into them in summer…these clothes would have become molded to their body like a second skin. The men rode everywhere, their legs would have been coated with horsehair, mud, so I wanted the fabric to look better with wear.”

Byrne decided to use fabric that wasn’t available back then, but which looked great on film.

“For Mary’s brothers, it’s all denim,” she says. “We used denim for everything on the film, and we did a lot of textile aging on it. If denim’s not washed gets a waxy pattern, and these guys would have been filthy, so we were trying to use a blend of our modern language and marry that to the Elizabethan period. Because we didn’t have the budget to film around the weather, we filmed in whatever the weather was. Mary and all of these folks we were living in Scotland, so they would have to have had weather gear for the climate.”

The queens did have women in their life; their handmaidens and ladies, who not only offered counsel but comfort. They had to look the part, too, never upstaging the queen but still looking like they belonged in royal company.

“Mary’s handmaidens were noblewomen she grew up with,” Bryne explains. “Her mother sent her to France at 5 or 6, and they want with her, and they were all called Mary. They were the only people she knew she could trust. Part of Mary coming back is she comes back a French widow, so there’s a transition from French clothing to Scottish. One of the Mary’s never makes that transition, and she remains firmly French.”

The film builds up to the two queens finally meeting face-to-face in what has to be one of the great scenes of the year.

“Ending with them together was amazing, and it was crucial that I balanced their looks for the meeting,” Byrne says. “I worked backward from that because I wanted the meeting to remain the focus without the clothes becoming distracting.”