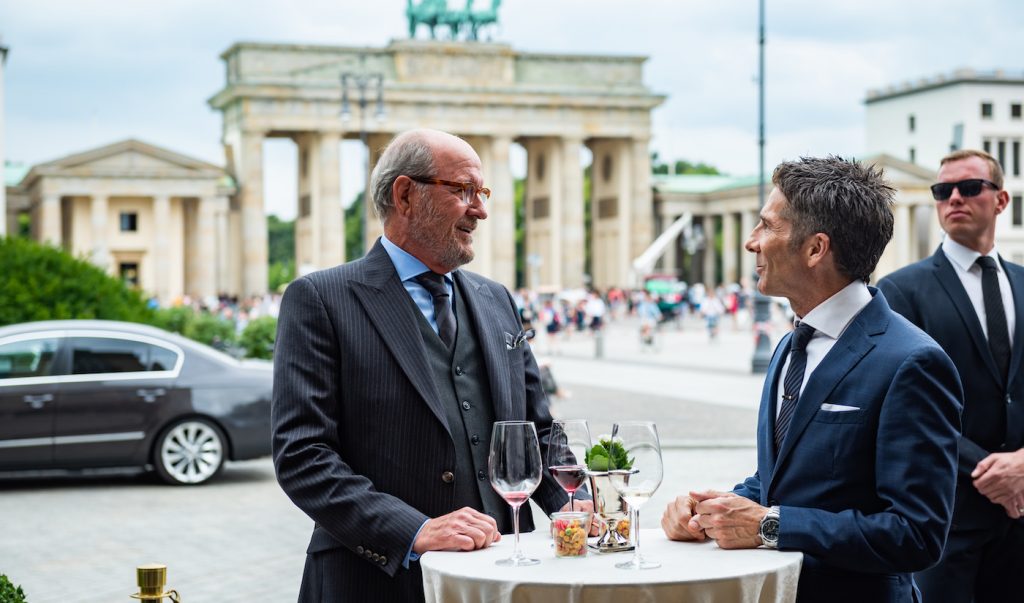 On one of the very few scripted television dramas to reflect the current global political climate, the covert C.I.A. operatives of Epix’s Berlin Station have found themselves mired in complex situations wrought by any number of familiar cranks and villains—internal whistle-blowers, far-right political parties, Russian thugs, mysterious hackers, and the list goes on. In depicting the inner workings of a fictionalized Berlin C.I.A. office, spy novelist Olen Steinhauer’s first television series works hard to examine the moral gray area of international espionage, as well as the real-world implications of complex ethical decisions made by well-meaning spies out in the field and less well-meaning career politicos in cushy, distant offices.

After taking on the German far right in season two, Berlin Station’s third season turns its gaze to the East. Analyst-turned-undercover officer Daniel Miller (Richard Armitage) and his deputy chief Robert Kirsch (Leland Orser) are off to Estonia, where a younger agent, Rafael (Ismael Cruz Cordova) has almost certainly uncovered a covert Russian invasion. In dealing with this threat, Daniel offers some befitting Trump side-eye to youthful Estonian glue-huffers, while elsewhere, a European representative at a secretive international security meeting demands to know if she’s been brought there to hash out “the two percent thing, again.” These issues, brought up in the background of the show’s action, are probably familiar to US audiences, but the backdrops themselves—a remarkable set of locations and builds across Europe—are likely less so.

Confronting the ramifications of on-the-ground international relations is far more visually arresting when these matters come to a head in an opulent nightclub, or an oligarch’s dacha, or even a grand old Berlin altbau apartment. Much of Berlin Station is shot on location, and it’s hard to tell when the show’s scenery has moved to a lot at Potsdam’s Babelsberg Studios. Michael Scheel was a producer on the show’s first two seasons and is an executive producer for season three; some of his English-language credits include Alone in Berlin and Inglorious Basterds. He led us through the show’s seamless combination of locations and built environments, highlighting where Hungary visually fills in for other nations, how to show hyped Berlin in a balanced way, and why one pivotal scene takes place in an actual Viennese sewer.

Can you give me a general breakdown of how much/what’s on location Berlin versus what’s built at Babelsberg Studios, in Potsdam?

The CIA station is completely built. Seasons one and two were shot in Berlin and Babelsberg, but for season three, we moved the complete station to Budapest. We did this because so many other background locations were set in the East. So if we’re referring to seasons one and two, then it’s true—we had a perfect split between the location work and studio shoots at Babelsberg, while in season three, we had the same scenario, but with a rental stage at a Budapest studio.

Given that a substantial part of season three takes place in Estonia, were you filming on location there or did Hungary fill in for the country?

We traveled to Estonia to shoot the establishing locations, but we came to the conclusion that filming entirely in Estonia is not as practical as it should be. So we shot in Hungary, not in Budapest, but in a city called Sopron, which we’d visited with our production designer, Marco Bittner-Rosser. We scouted quite a lot and visited a fair number of Hungarian towns and cities to find the right match. In Sopron, where the old town has extensive period architecture, we found an area which reminded us of Estonia and decided it would work perfectly.

How is filming in Hungary?

The whole world is shooting there, and so there are super professional crews in the country. There is also a very good infrastructure, and you get perfect support.

In Berlin, the show depicts a number of recognizable locations around the center, as well as many that would surprise even viewers familiar with the city. How do you choose where to film?

The aim is to create an authentic sense of Berlin. When we chose locations for season three, it was also key not to repeat ourselves, since we’ve already shown a fair amount of the city in the first two seasons. We went to the Badeschiff [a club set on a stationary boat], for example, and filmed a wonderful scene there. Berlin has many layers: The city has typical sightseeing elements, but at the same time, many different quarters with diverse qualities. We want to present Berlin in such a way that the audience gets the feeling this is more than a merely interesting place—there’s so much to discover here. This is why our approach is not to shoot only well-known landmarks, but to show Berlin how it really is.

As the city seems to get busier every year, does it get tougher to film subsequent seasons of the show?

It’s getting busier, that’s true, and we have to plan accurately, but at the same time, the city is very supportive. We do our homework, present our plans, and sort it all together with the local authorities. For us, it’s important to get that support, because our aim is to present Berlin to the world. And in turn, we try to do our best to support the city with our work.

Outside Berlin, season three of the show introduces a number of beautiful new locations across Europe. One character is holed up in a Viennese monastery, another is being held in a vault in the back of a palatial nightclub. Were these all shot on location?

The exterior of the monastery we found in Vienna, and the interior we shot in Hungary. All the exterior street scenes in Vienna were shot on location in the city, and we were unbelievably proud we filmed in the sewers, for example, because that was a goal of our showrunner, Jason Horwitch. He had it in mind that he’d like to shoot where The Third Man [a 1949 British film noir] takes place. Therefore, it was a reference to the film; we wanted to quote that movie. When it came to the interior of the vault, we built a set in an old apartment we found in Budapest, for a seamless walk-through between the club scenes and those taking place in the vault.

What about creating the oligarch Krik’s over-the-top dacha?

We were lucky to find these unbelievable forests outside Budapest, while the exterior and interior of the dacha we built on the studio lot. So our actors were running through a real forest, but when they came to the dacha, of course, it was a build—that dacha couldn’t be found. First, we needed that typical Russian-influenced aesthetic. Second, we had to be able to film beneath the floors, which necessitated building the set with the trap door under which the character Hector DeJean hides.

Less palatial but still fairly grand are the interiors of the CIA’s Berlin digs—are those on location or out at Babelsberg?

Robert’s home is a studio build. Steven Frost’s was on location and there’s no green screen—outside his window, you really can see the Brandenburg Gate. Even though he’s living in a hotel, we wanted to show that Berlin will never let him go. Here, the gate is representative of the city, and helps to make the statement: Frost and Berlin are sticking together.