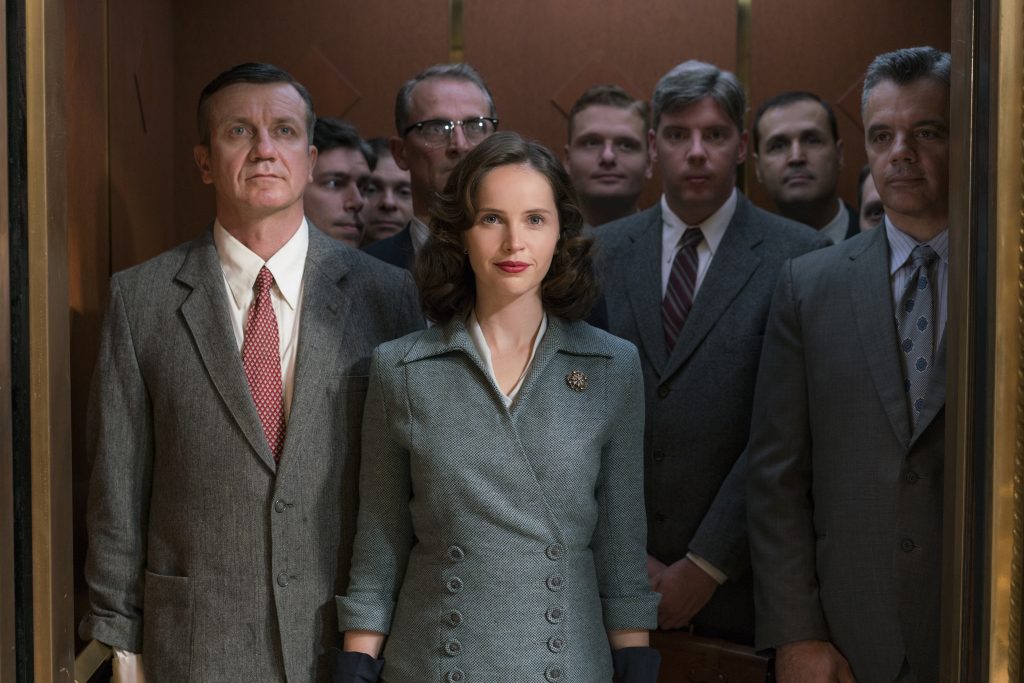 On the Basis of Sex: Editing the Origin Story of a Real-Life Hero

Every great hero begins somewhere. Before saving the planet, superheroes often channel their gift from the gods, survive the bite or a spider, or mutate after alien radiation exposure. The hero of On the Basis of Sex, however, began her journey of toppling titans and freeing the people in a place far more ordinary. A courtroom.

“When [director] Mimi [Leder] approached me initially about the project, I also had expectations this is going to be this grand biopic of Justice Ginsburg’s life and how she got to where she is,” editor Michelle Tesoro recalled. “Immediately Mimi was like, ‘No,’ because there’s no way you could fit all that she’s done into a concise movie. What they wanted to do was really to tell an origin story.”

Ruth Bader Ginsburg is known today as a voice for equality when millions of voices feel unheard. Now an octogenarian, the Supreme Court Justice has become a cultural icon in recent years. Kate MacKinnon captures her spirit in a lively recurring SNL skit and documentary RBG explores her daily life including her now-famous exercise regime. On the Basis of Sex, however, takes us back to a pivotal era in Ginsburg’s (Felicity Jones) career when she presented a landmark case. In true RBG style, her first case ever tried in court was one of her most important.

“When you look up the Moritz v. Commissioner [of Internal Revenue] case, there’s not a lot of information about it on the internet in terms of research,” Tesoro noted. “Unless you’re a law student then maybe you studied it. It is sort of an untold part of her story. I think that really in a way it humanizes her.”

The principal pillar of the film is a 16-page courtroom scene written as solid dialogue. Tesoro cut her teeth working on HBO’s acclaimed series In Treatment, a project which prepped her for turning talking heads into compelling drama. Not only was she working within the scope of a large legal conversation, but Tesoro was also receiving footage of the scene from multiple angles.

“Basically, when you’re shooting a scene where people are talking in front of each other or around a table, there’s usually one side of the line and then the reverse,” Tesoro explained. “[Ginsburg] and the Department of Justice on one side and the three Appellate Court Justices on the other. Mimi shot one side on one day. Then another day she turned around and shot everyone on the other side. On the third day, I think they did some pickups and a different angle of people in the galley and their reactions. I couldn’t really cut the scene until she shot all three days of footage. I think it might have come out to be like 26 hours of cuttable footage.”

The screenplay was the launching point for Tesoro to begin digging into the hours of footage. First, she identified the main beats of the scene then shaped the details and even the structure of the argument in the editing bay. She spent weeks on the crucial scene, honing and refining the impact it made on the story.

“There were certain things that [Leder] wanted to rearrange in terms of [Ginsburg’s] argument in the dialogue,” Tesoro revealed. “Basically, for three weeks we were cutting that scene. The first part of it we focused on Felicity’s performance. I think that took us maybe 3 or 4 days to get through the whole thing. After that, it was the structure of the entire scene. There were some lines that were stronger than others that [Leder] wanted to end on. There was a line in the middle that [producer] Jonathan [King] and Mimi felt like they wanted to end on, so we finagled that a little bit differently.”

Tesoro was charged with orienting moviegoers who don’t have a law degree or know the ins and outs of Ginsburg’s cases. She makes the impact of each scene navigable whether or not you know any specific legal language. By creating a clear roadmap, everyone can follow the emotional journey of Ginsburg’s battle. One tactic was incorporating a practice round that helps clue the audience in before Ginsburg stands before the final judge.

“There was another moot court sequence that happened prior to that that [Leder] shot basically the same way,” Tesoro said. “The moot court is like a practice court. [Ginsburg] had never tried a case before. I wanted those two instances to really mirror each other so that when you got to the courtroom, you understood the implications of certain scenes or why certain arguments weren’t working. They call back to the previous sequence.”

Tesoro knew she had accomplished her goal when the film was screened for two test audiences. A lot of the film’s contributors have finished their work by the time an audience sees a film, but this is a critical test for editors. Tesoro was able to utilize the feedback to assess and shape the final product.

“Those were exciting for me,” Tesoro said. “I believe those fresh eyes are really helpful for an editor and for a filmmaker when we’re trying to hone the project. You’ve got to get out of the bubble in your head of what you think is working in the movie. There does come a point where you’re in it too deep and you don’t have any perspective about what is working, what isn’t working. There’s a balance as an editor and director. You want to present something artful that may not be the most popular thing, but at the same time, it has to live on in eternity. Films people go back and watch hopefully. It has to be a good movie now or 20 years from now.”

On the Basis of Sex opens in theaters Christmas day.

TAGSOn the Basis of Sex