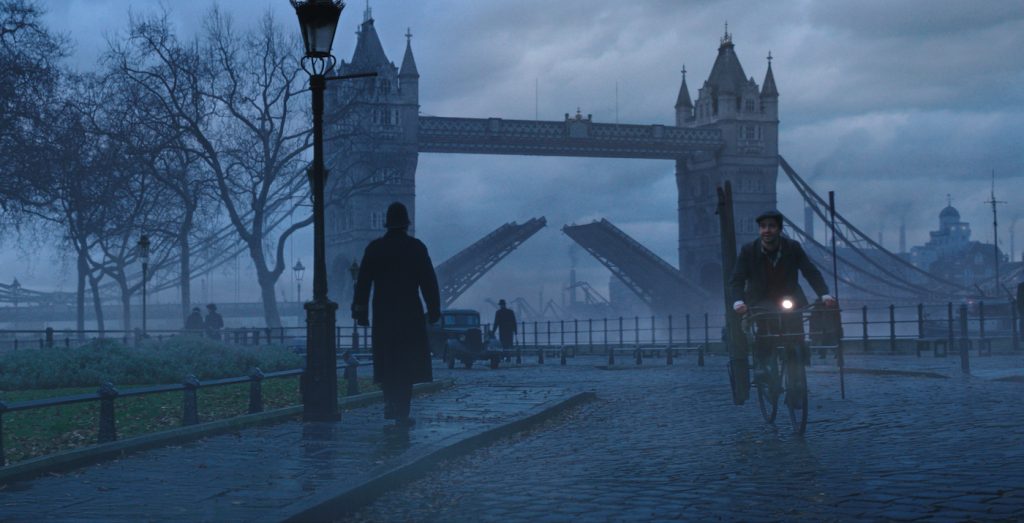 English weather wreaked havoc on best-laid plans when it came to staging outdoor sequences for Mary Poppins Returns. Director Rob Marshall expected London’s usual overcast skies to accompany Mary Poppins’ descent from the heavens early in the movie. Instead, Mother Nature delivered a perfect sunny day. The UK-based visual effects supervisor Matt Johnson recalls, “It’s supposed to be all wind and clouds but suddenly London had a massive heat wave and we got a clear blue sky.” The solution? Digital artists digitally replaced the colors. We had to grade out all these harsh shadows caused by the sun switched everything around to make this glorious kind of L.A. sky all dark and gray. And the irony is the at the end of the movie, we needed an incredibly bright day and that week it was raining, so we had to do the exact opposite and make all the dull skies look blue.”

Not that audiences can tell. Johnson, who previously supervised CGI-intensive movies including World War Z and X Men: First Class, used digital effects to enhance, rather than overwhelm, flesh and blood performance. He says “Rob is different from a lot of other directors because of his background in musical theater. Instead of doing bits and pieces cut together with a lot of CGI, which is typical of many visual effects movies, Rob likes to do long takes as if he were directing a Broadway show.”

Speaking from Los Angeles during an uncharacteristically heavy downpour, Johnson pulled back the curtain on four key bits of Mary Poppins magic.

After little Georgie Banks’ (Joel Dawson) kite goes up, Mary Poppins comes down, intent on saving the entire Banks family from Depression-era despair. Johnson says, “The whole movie’s been building up to this money shot of Mary Poppins, so we used every trick in the book to make her arrival look iconic. We spent many days with a long lens pointing up at the sky taking one frame every minute to get time-lapse photography of swirling clouds. We composited different kinds of sky and lighting cues so that when clouds go away and the sun comes out, we surrounded CG Mary with little shafts of light. When she’s floating above the trees, Emily Blunt did that herself on the backlot of Pinewood Studios. She was hoisted up on a cable rig attached to this large crane with a computer-controlled winch that lowered Emily until that last moment when she steps onto the ground and carries on walking. Then we removed the wires and added the sky, but Mary herself is completely real.”

Mary Poppins’ first big musical number “Can You Imagine That?” takes place in a fantastical underwater realm where she sings and swims with her young charges. “We put that whole sequence together in pre-vis at Shepperton Studios. When it came time to film, we matched the pre-vis shot for shot.”

Johnson continues, “Usually in a superhero movie for a sequence like this you’d use digital-doubles instead of the actual actors, but Rob wanted all the cast members in the frame at the same time singing and floating along as if they were doing a big Broadway show. We used a very elaborate tracking system on the top of the soundstage so each actor could move forward on a cable. Then we put cameras on a techno-crane that allowed us to push past the actors and do compound moves to make you feel like you’re really immersed in the scene.”

When a Royal Doulton vase magically comes to life as a 1930’s music hall, Blunt and co-star Lin-Manuel Miranda perform song and dance routines drenched in Broadway-style razzmatazz while old-school animated characters cheer them on. Johnson says, “The original movie had an animated sequence, which was key to what we wanted to do in this one as well. Rather than cheat and do the animated character stuff in CG, we decided to use traditional 2-D hand-drawn animation. We built the music hall as a CG environment and textured it with this authentic hand-painted artwork to make it feel like the sequence really belongs in that [traditional] Disney cartoon world. To make it feel dynamic, we used sweeping camera moves that you couldn’t have done technically back in 1964.”

Up, Up and Away in Spring Park

The movie’s airborne finale begins on the ground in “Spring Park” aka Pinewood Gardens, where Angela Lansbury’s character hands out magical balloons. Once Mr. Banks (Ben Whishaw) and his family achieve liftoff, the practical location was swapped out for a digitally constructed backdrop. “The challenge there was to make the performances happen live as much as possible,” Johnson says. “We created a full digital park with trees and Ferris wheel along with these highly detailed CG versions of Buckingham Palace and Big Ben in the background.”

With digital London added during post-production, actors floated above the “city” wearing harnesses. Johnson explains, “We had all the principal cast members moving around on wires in front of a green screen. We shot 30 or 40 different passes because Rob has an incredible visual sense. ‘On frame 17 this dancer’s leg would be over there because it’s a nice shape and that balances some other thing. It was all very choreographed.”

That painstaking attention to detail yielded buoyant visuals custom-tailored to composer Marc Shaiman and lyricist Scott Wittman’s closing number “Nowhere to Go But Up.” Johnson says, “The song at the end of the movie has such a joyous lift and feel to it that we wanted to swing the camera around to show how happy and sunny it is now that the family is back together again and dad can be a kid and the kids can be kids again.”