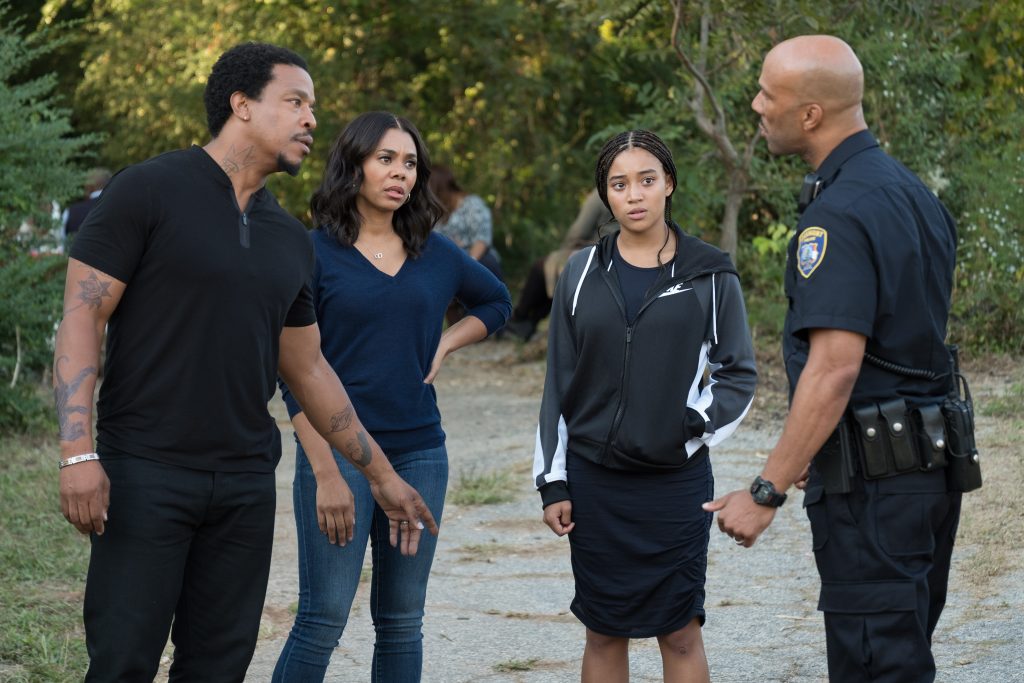 The Hate U Give takes no time to build up to the powerful message it delivers. The film opens on one of its most important and intimate scenes. A father, tough and terrified, lectures his seemingly too young kids on how to interact with police officers. Their mother tries to temper his tone, but he knows his children are entering a world where he is running out of time to protect them. Russell Hornsby offers a raw portrayal of a private moment every parent wishes they didn’t have to have.

“When I first read the script, the real impact is the first scene, ‘The Talk.’ I just said to myself, just as a human being and a man, if this scene stays in the movie, we really have something great,” Hornsby recalled. “That was a scene that really grabbed me as an actor.”

It is a scene that also grabs the audience and endears us to Maverick Carter immediately. He is an imperfect man living with lasting effects of long-ago mistakes but offers everything he has to his children. It is a complex and dynamic character that Hornsby infuses with humanity. Maverick also has distinct clarity in a story with complexity and a variety of different perspectives. He is rock steady and dependable, something that Hornsby carefully honed.

“This character is so far from who I am as Russell. Maverick is just a completely different person than who Russell is. His history, his life, his experiences. That is what I was really in search of, those dynamics of who Maverick is,” Hornsby said. “I need to find Maverick from within first and put Maverick on top of Russell so that Russell can get in that skin and become who he is.”

Fully realizing a character from within requires intensive study, Hornsby said. Hailing from the theater, he can spend months preparing for a role. For Maverick, Hornsby said he worked by himself for nearly a month. The results are proof of the method. Maverick is tested across environments and situations but always stays true to himself.

Hornsby credits author Angie Thomas with creating a thoroughly developed character in Maverick. The #1 New York Times bestseller that inspired the film helped fill in gaps for the actors. If any answers were missing from the screenplay, they could be found in the book.

“As I read the script, I was really taken by the layers of the character. Then when I went back and I read the book, I got the role,” Hornsby said. “Angie Thomas just did a wonderful job of giving the character so much depth and dimension in her storytelling and the character that she created. All I had to do as the actor was go in and continue to build upon the nuance that was there and just add as many layers as I possibly could to the character as an actor.”

Although written for a young adult audience, The Hate U Give addresses traumatic issues without censoring. Police brutality, racial divides, drug trade in communities are all portrayed free from patronizing. Just as Maverick tried to prepare his young children for a dangerous world, they’re important lessons delivered with gravity.

“We had to honor [Thomas’] narrative and the book is very real, very authentic. I believe that if we were to pull any punches, first of all we wouldn’t be honoring her and the book,” Hornsby said. “Also, I think we would be pandering and insulting our audience. The reality of it is that the kids read the book and the book spells out all that happens. It was a #1 bestseller because kids were drawn to it, they read it, and they loved it, and got more people to read it.”

16-year-old Starr Carter (Amandla Stenberg) turns her most painful experiences into activism. Hornsby expressed that her journey is a reflection of America today and that young audiences are often doing the same. There is an honesty in the performances that seemed necessary, no matter how difficult.

“There was just a great sense of purpose to tell the story,” Hornsby said. “I think to [director] George [Tillman Jr.]’s credit, he cast the film with actors that present the right amount of truth as human beings. There is not a false note in the film as it pertains to the performances. Everybody is just authentic. Amandla, I’m sure you’ve seen the kind of woman she is. How she stands up and speaks truth to power. You’re not going to get a false note from her. Think of what has really happened in the world, that’s who she is. She’s a representation of Starr in real life so there is nothing else she could do but tell the truth.”

Stenberg is undoubtedly a star on a meteoric rise, but she is one of many talented young performers in the film. Lamar Johnson and TJ Wright play Starr’s siblings and Algee Smith the victim of a police shooting. Hornsby praised the professionalism of the young cast.

“I have to give these young people a lot of credit,” Hornsby said. “Lamar Johnson, Amandla, Algee. Honestly, these are some special kids. They’re talented, they’re bright, but the humanity they possess is different. Why I say that is Regina [Hall] and I really approached the kids with a high level of respect, but we also said in our actions we’re in charge. I think they respectfully understood that. I think our charge as the adults was to empower them as much as we possibly could. To enrich them and to enrich the experience for them. To make a safe space and atmosphere for them so that they could trust us. If we had a note or a thought or an idea, because we had set up enough goodwill between us, they would take to it. We had a wonderful relationship and dynamic because of that.”

Now appearing as Buddy Marcelle in Creed II, Hornsby welcomed playing a lighter character. After heavy roles in Fences and The Hate U Give, he feels ready for something different.

“The thing that people don’t really know about me is I’m funny,” Hornsby laughed. “I think I have a great sense of humor. I have kids so I’m silly and wild and crazy and zany and stuff like that. So I wouldn’t mind tackling humor, dramatic humor, something like that. My whole hope is just that the script – they say above all, the text is sacred. It has to be on the page. I just want to tell wonderful, fun stories, interesting stories and play interesting characters that have a depth and a breadth and a soul.”

TAGS20th Century Fox The Hate U Give