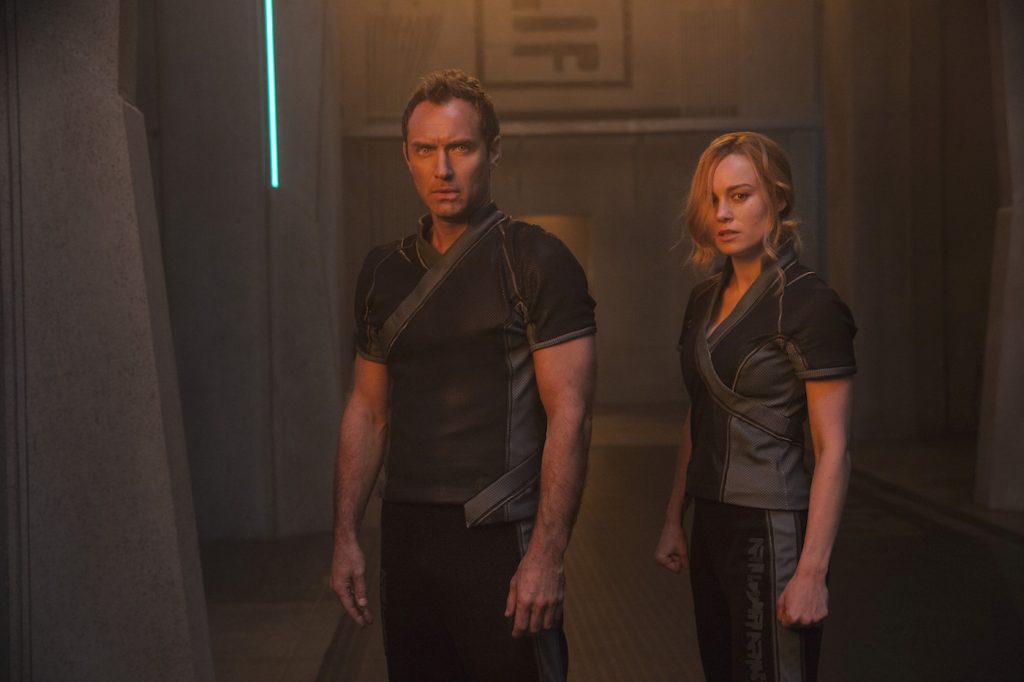 The last bit of information we got about Captain Marvel came a few weeks ago when we learned what the year the film is set. (Hint: Brad Pitt was People Magazine’s Sexiest Man Alive and everyone was doing the Macarena). It was a month and change before that when we got our first good glimpse at directors Anna Boden and Ryan Fleck’s film when the Captain Marvel trailer bowed, revealing an origin story (of sorts) that depicts how Carol Danvers (Brie Larson) became the most powerful superhero in the MCU (plus a de-aged Samuel L. Jackson, which really did blow our minds.) Well, thanks to Crazy Rich Asians‘ Gemma Chan, who is playing Kree villain Minn-erva, we’ve got something new to share; Chan dropped this photo from the reshoots showing off her alien manicure. The photo shows Minn-erva’s hand, in that striking Kree blue, and a portion of the black and green suit that the Starforce military team wears in the film:

Reshoots are par for the course for these massive Marvel films, so there’s no cause for alarm. Considering all these films are in a conversation with one another, so to speak, with their interconnected storylines and characters floating from one film to the next, reshoots are common due to the many changes a single film can undergo before its released. Avengers 4 underwent reshoots, too, as the process of making these films is long, highly collaborative, and seemingly unending until that final cut is locked. Considering Avengers 4 is, last time we checked, sitting at around a 3-hour runtime, there’s still quite a bit of road to pave there before that film is done.

As for Captain Marvel, the sky’s the limit for what Carol Danvers might be capable of. Many MCU-heads assume she’ll be the savior in Avengers 4, helping those who survived Thanos’s snap to kill the Mad Titan and help bring back the superheroes he destroyed. As for Chan’s Minn-erva, in the comics she’s a geneticist and an enemy of Mar-Vell, who is played in the film by Jude Law, so there’s a good chance she’s one of the villains. The Krees have been causing trouble since they were first introduced in Guardians of the Galaxy when Ronan the Destroyer (Lee Pace) was set to kill the entire team before Star-lord (Chris Pratt) initiated that fateful dance-off. Ronan’s back in Captain Marvel, and we’re guessing Chan’s Minn-erva is going to be a key ally of his. You can see Chan in Mary Queen of Scots this December 7, where she plays Bess of Hardwick, one of Queen Elizabeth I (Margot Robbie)’s most trusted ladies.