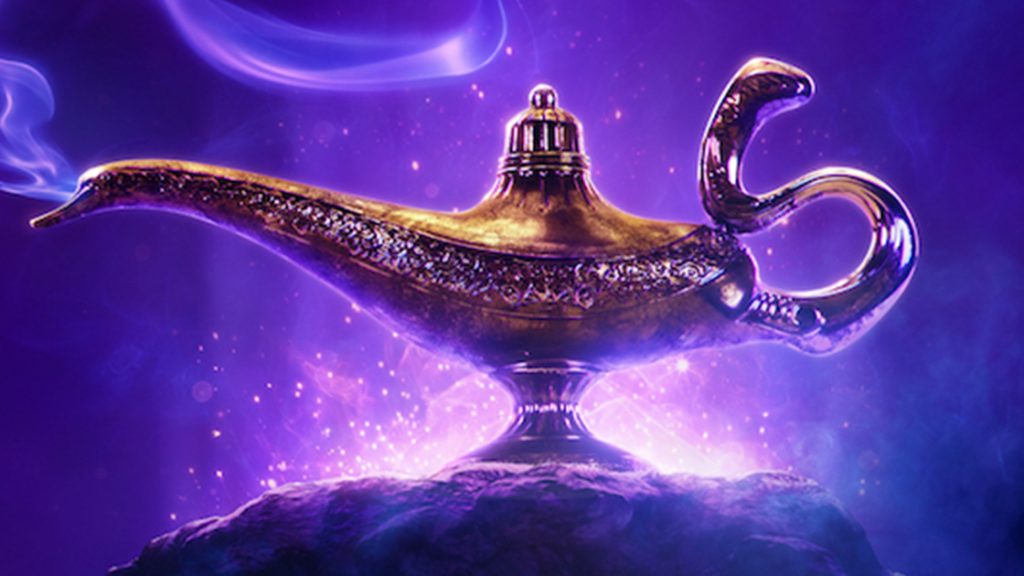 What you are seeing is not a mirage. The teaser trailer for Aladdin is truly here, and it is a trip to the land of excitement and nostalgia.

There is pretty much a theme with these live action teasers now, which speaks to the fact that Disney films are so iconic. They need a mere symbol or suggestion to take you back to your childhood. Cinderella was introduced with 60 seconds of the glass slipper. The Beauty and the Beast teaser was a little more intricate with the Disney castle transformed into the Beast’s castle. We got some interior shots and the magical rose that finally reveals Belle for the first time.

Aladdin follows this pattern a little more closely with a sweeping view of the Arabian desert, the alluring and frightening Cave of Wonders, and then the money shot. Our first look at Mena Massoud as Aladdin himself. In a near exact mirror of Belle’s teaser, he reaches for the magical lamp with cautious intrigue that will change his world forever. Massoud looks great and his costume is a fairly faithful interpretation of the animated version, except he is wearing a shirt under that vest. That’s a fair alteration.

The trailer is basically a reintroduction to the grandiose orchestrations of Alan Menken, Howard Ashman, and Tim Rice’s music from the original with some visual flair. Boy, is that a good tactic. This music really is some of the greatest ever written and a jewel in the Sultan’s crown among Disney films. The only people we could possibly trust to improve upon these gems are Benj Pasek and Justin Paul who have now earned our trust with La La Land and The Greatest Showman.

Everything here is so totally on theme, that even the text of the title is designed to be like swords. Guy Ritchie seems to be delivering exactly what the fans will want to see. The joy of these live-action adaptations is you feel even more connected to a beloved story. If you can see it in a realistic, albeit highly VFX enhanced, setting, it’s a whole new experience and as engrossing as the first time. The original 1992 Aladdin was exceptional, but to see the sweeping sands and all of that glittering treasure truly is spectacular. My three wishes are for this movie to be released right now.

Aladdin’s journey begins on May 24.