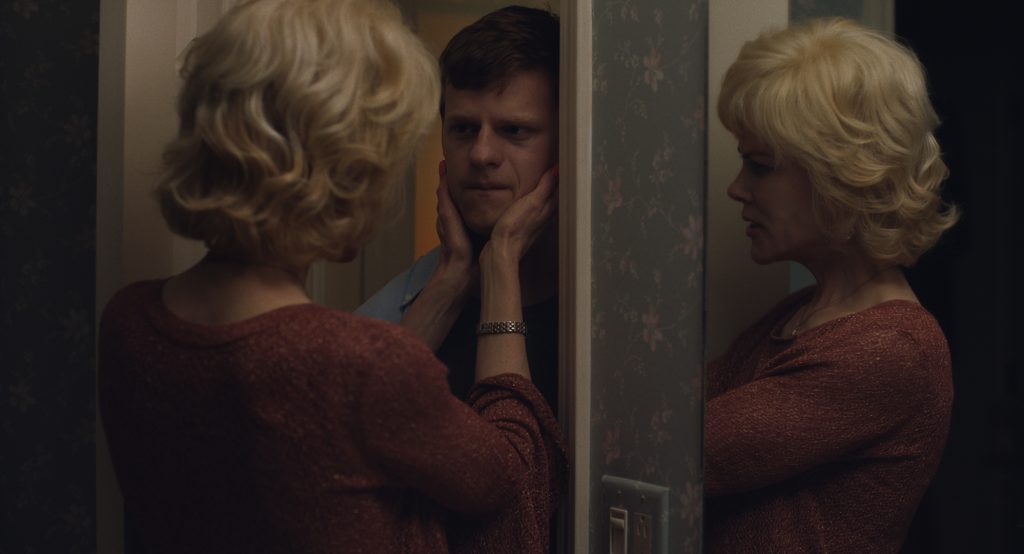 TIFF 2018: The Tender Fragility of the Boy Erased Score

Boy Erased is a shattering portrayal of a family fractured by a challenge to their stringent religious beliefs. Based on the memoir by Garrard Conley, Lucas Hedges plays Jared, a young man from a religious family who begins to realize he is gay. Jared’s parents send him to a church-sanctioned conversion therapy camp where he struggles to find acceptance even within. Hedges’ performance is fragile and vulnerable, which makes many of the story’s events difficult to watch. Composers Saunder Jurriaans and Danny Bensi chart the evolution of Jared’s self-awareness and the strain of his relationships as he navigates the confusing period.

“[Lucas] is perfect for this role because this kid is going through so much internal struggle and his face really shows that the entire time,” Jurriaans said. “He barely needs to talk about it because we see it, and that is also where we scored from. It made it easier for us to score that aspect of it.”

“One thing about the film that is so good is that he is a really smart and intelligent person and emotionally in tune,” Bensi added. “He is so clear and open and it’s impossible not to follow him. It wasn’t like we tried to say he was going to this gay conversion camp and these are the worst things in the world. It’s not our job, or the director’s job necessarily, to say these camps are bad. We’re just trying to reflect what is going through his head and what he went through and flashbacks and stuff, there are always different parts to the music.”

Jurriaans and Bensi’s score is tragically intimate. Hedges delivers a stunningly stoic performance throughout many raw and disturbing moments. The music, however, reveals the emotional state he suppresses. Director Joel Edgerton, who also appears in the film, is reluctant to cast direct judgment on the characters. What makes some of the scenarios most difficult is the fact that the methods Jared’s parents turn to are motivated by love.

The conversion camp of the film clearly lacks any recreational value. Using abrasive and intrusive tactics, the program is designed to forcibly change the young men’s sexuality. It is strict, invasive, and even dehumanizing. Listen closely and the composers use subtle clues to describe what the characters do not say. By utilizing familiar musical symbols, the score can convey a new meaning.

“The actual conversion therapy center has this super cold, clinical, scary and militaristic vibe,” Jurriaans said. “So, we even use some snare drums. For that, there is an absurdity to the whole thing. A complexity but trying not to go too dark with it. Then there is his internal struggle, which is a through line through the whole thing. We scored in a lot of sighing, wilting, and repetitive meditative motifs.”

The music further paints an atmospheric tone using familiar elements in creatively precise ways. The conversion camp is a religious institution, which hangs on Jared and adds to the psychological stress. Rather than being an inspiring and supportive environment, there is sadness and confinement. Jurriaans and Bensi modify traditional Christian hymnal elements to convey the anxious environment.

“We used elements of religious music. We used a small boys choir for a lot of it, but not as it would be used in a church,” Jurriaans said. “We did a lot of rhythmic syllabic chanting stuff. We wanted it to sound like a ratty group of kids. We used a church organ. There is kind of a reverent vibe to it. At the same time, we try not to drift too far that way.”

“In the middle of the film when Jared is really starting to have a rough time, he’s feeling really lost and alone and decides to go for a jog,” Bensi described. “He’s running and we chose to score that part with a single church organ pedal. It’s a low bass tone. Just a single note on a church organ and there is a solo violin playing very high in juxtaposition to give this cathedral, very spacious quality. The way the violin starts to play is kind of alarming. It’s still a religious feel, but it’s starting to get a little angry. It never goes big, but it’s just Jared at a bus stop by a strip mall. You could go bigger, but let’s not. It’s just him and his thoughts right now.”

Throughout the film, Jared carries the weight of adult conflict and confusion. Each of his guardians weighs their own insecurities on the teenage boy leaving him to bear the consequences. The caring companionship he never finds from his loved ones is delivered in the film’s score. The music throughout is more tender and understanding than any person in his life offering small comfort.

“For all of the solo violin parts, Danny played them and he plays the violin like he plays cello in between his legs like a very small cello,” Jurriaans explained. “He’s very good, but it’s a very specific sound. It had this fragile aspect to it. We recorded all of those parts with an amazing professional violin player and she recorded all of the parts. We went back and watched the film with all the new violin parts and we had to go back [to Danny’s version]. Her version is too good.”

“The sound cut through,” Bensi added.

“It’s funny how that works.”