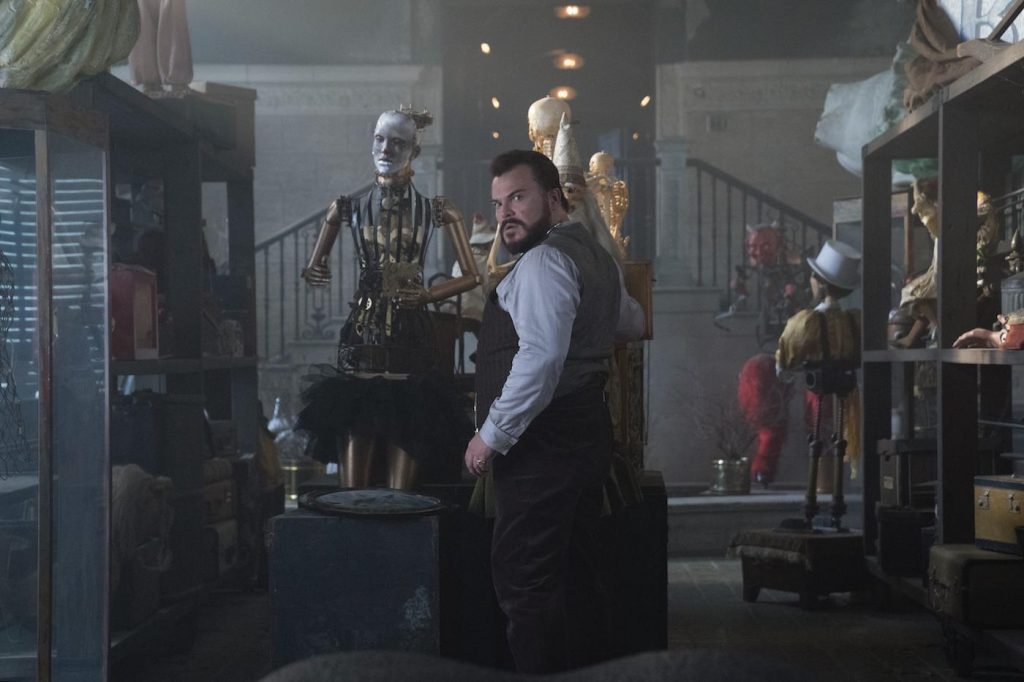 Horror master Eli Roth, known for directing The Hostel and Cabin Fever series, trades gore for wonder in his newest work, a PG adaptation of John Bellairs’ 1973 YA novel, The House With a Clock in Its Walls. Starring Jack Black as Uncle Jonathan, a self-proclaimed warlock, and Cate Blanchett as his sharp, competent witch neighbor, Florence Zimmerman, the plot of House and the fate of its young protagonist, Lewis (Owen Vaccaro) turn on its original titular setting. We see orphaned Lewis, daily clad in aviator’s goggles, struggle at school and with the loss of his parents, but at home with Uncle Jonathan’s eyebrows, and Mrs. Zimmerman’s witty barbs, Lewis hits his stride, or at least, he tries to. In raising the dead, evil former owner of his new home, the house, too, comes to life, and it’s this often anthropomorphic setting that gives the movie its magic.

The home in Bellairs’ Edward Gorey-illustrated novel is based on a 19th-century mansion, the Cronin House, in the author’s hometown of Marshall, Michigan. In inventing a new version of this setting for House, the film’s production designer, Jon Hutman, built the space across an inspired series of soundstages and practical sets that, while not the Cronin House, did include another historic American mansion. We spoke with Hutman, who filled us in on arriving at the film’s final, super-saturated color palette, maintaining a sense of reality against the backdrop of a magical home, and director Roth’s surprisingly sophisticated inspiration for misfit young Lewis.

When you work on a film based on a book, how much do you turn to the source material for inspiration?

Honestly, in this case, in a secondary way, not a primary method. We had very specific notes about the family and the house, and there’s a theory that [author] John Bellairs based a lot of this on his childhood, and lived in a big Victorian house, etc. etc. For me personally, for the design of the movie, it really came from what was in the screenplay.

Are you an Edward Gorey fan, or was anyone on set?

Everyone’s an Edward Gorey fan. I am, certainly. For me, Tim Burton, in his movies, was more literal in the translation of Edward Gorey. There’s something super stylized in

Edward Gorey’s work—and this film certainly has a strong stylistic point of view—but what we really tried to do was stay in the kid’s point of view. And as spooky and intimidating as the house initially appears, there’s a warmth to it. What was really important to [show] there, underneath, was that it was going to grow into a place that was going to be his home. It’s a story of a kid who finds out who he is. That house ends up containing and embodying the warmth of family. So the question is, how do you do the kind of spookiness that’s in Edward Gorey, but give it a kind of warmth and a heart? That’s what we tried to do.

Can you tell me how the incredible color palette played into that effort?

You know, it’s funny. For me, design is a very linear process. First I read the script, and in a movie like this, it’s all about the house and the town it’s in — you find those two things, and you figure out the architecture. The color palette comes. There was no question that the feeling of warmth had to come from the color palette. It’s in the story that Florence Zimmermann lives in a purple house and only wears purple, which by the way is a whole challenge unto itself. Because you don’t want it to feel, when you walk into Florence’s house, the way you feel when Dorothy steps into Oz. Oz is about being all green. With Florence, you don’t go, ‘oh my god, she’s a freak.’ It’s very real. Marlene [Stewart], the costume designer, and I have known each other for a long time. We used to do Madonna videos together, a long time ago. So we worked together on that palette. Is it a blue-purple? Is it a magenta purple? So that’s one whole piece of it, and it keeps the purple out of the main house.

For me, what led the color is the warmth of the wood. I found this wacko website of Victorian houses, called big houses dot com or something like that. When I saw this house, there was something about the scale about it. What I love about the house, probably more than anything else, is the wainscoting that goes from the entry hall, up the stairs, and is in Lewis’s bedroom. It’s really graphic and deep. We exaggerated the scale of the banister going up the stairs, but it was all sort of rooted in this house. The wood was really orange and warm, way more than I would typically do, and that’s where the warmth of the house started. And then room by room, the parlor in gold, the dining room is red; the library is green, Lewis’s bedroom is blue. It was like, how do you bring these gem tones up to the level of the warmth of that wood? When you watch the movie, I don’t think you say, oh, you’re in a red room, or you’re in a gold room. The whole palette is so saturated that it feels like a rich, magical place. The way I ended at that was by instinct rather than by [thinking] ‘Oh, I’m going to go after a saturated palette.’ I feel it, and I look at a lot of images and I think, that’s what the parlor would look like, that’s what the dining room would look like.

How were such elaborate interiors staged? What was the mix of practical sets and soundstages?

Okay, you go up to the outside of the house, and that’s a practical location. We found this house, we built the big spooky wall and gates where it used to be sort of wide open, and made it all overgrown and funky. It’s really the wall and the big scary wrought-iron gates that changed the tone of the house. Then, when you walk in the front door, the whole first floor is built on a soundstage, so the entryway, the staircase, the stained glass, the library, the parlor, and the dining room are all one big set. Then you go up the stairs, and Lewis’s bedroom and the hallway outside are a set. Then, when he starts to follow Uncle Jonathan to the solarium, that bit of hallway is a practical location. We found this mansion called the Candler Mansion, that’s an abandoned mansion in Atlanta, built by one of the Coca-Cola heirs. Nobody’d been in it for twenty years, and they let us in which was a miracle, and there was a little mold and asbestos which had to be abated, but we did that. And we obviously built that fireplace with the mouth that opens up, brought in all the dressing with magic props, and then when you go through that fireplace and come out in Isaac’s workshop, that was the ballroom of the Candler Mansion. We dressed it and built the giant telescope and planetary model. Then when you go down into the basement, the basement and clockworks are sets. It’s three-quarters set, and the solarium and Isaac’s workshop are practical locations.

In coordinating such distinct visuals, what was the collaborative process like between you, director Eli Roth, costume designer Marlene Stewart, and others on set?

When I meet a director for the first time, especially on a movie like this, which is so visually driven, I’ll put together a presentation. I’ll say, here’s what I think the talent looks like, here’s what the house should look like [and so on]. And then Eli says, ‘okay, this is what I was thinking, except.’ And then he’s got his Pinterest board, which everyone has, and says, I want the pumpkins to be more extreme—the pumpkin battle was a big idea. [The character] Isaac’s workshop—that was originally in the script as a little, tiny turret room. The fireplace opens up, you go up a stair, and you’re in a little room. That was in the original story. And then we found this location [the Candler Mansion], with this gigantic ballroom, and I said, ‘well, we can’t use this.’ Eli was like, ‘what do you mean we can’t use this? This is the turret room!’ And I’m like, ‘the turret room? This is bigger than the whole house!’ And he said no, it’s a magical space. It doesn’t exist in physical reality. And he designed a sequence where Lewis is kidnapped, and they have to escape, and the whole thing evolved from that. That’s very much how the collaborative process went.

What you’re giving is this heightened world. From the outside, all the kids think Lewis lives in the slaughterhouse, and so we had to do a house that looks from the outside like the slaughterhouse, but then when you go inside, everywhere you go, your eyes pop out of your head, and this is the most amazing place, and the people in it are the most amazing people. It’s a world of wonder. It’s about childhood wonder.

Featured image: Uncle Jonathan (Jack Black) with a collection of objects that aren’t quite what they seem in “The House With A Clock in Its Walls,” the spine-tingling, magical adventure of a boy who goes to live with his eccentric uncle in a creaky old house with a mysterious tick-tocking heart. Based on the first volume in the beloved children’s series of books, the film is directed by master frightener Eli Roth. Photo Credit: Quantrell Colbert/Universal Pictures and Amblin Entertainment