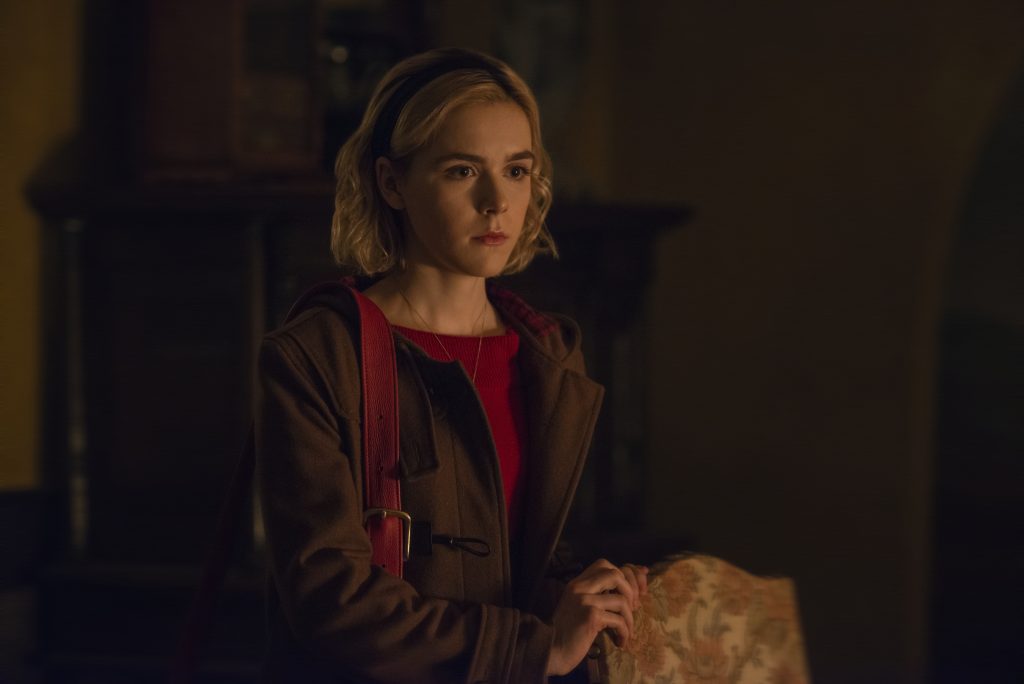 Birthdays are apparently a big deal among the Spellman clan. The first poster and teaser for Chilling Adventures of Sabrina feature the teenage witch celebrating another trip around the sun. Her party has the normal things all birthday parties do. Cake, dancing, and a horned demon that everyone worships.

Ok, maybe that last part is a little unusual. In fact, there’s a lot of unique happenings in the first look at the Riverdale spinoff. The Spellman’s apparently own a mortuary, which is morbidly magnificent. Sabrina’s aunts Hilda and Zelda, who appear over her shoulder as she blows out her candles, are presumably the proprietors. They even have branded matchbooks. Where can we get a set?

If Sabrina was hoping for a drama free sweet 16, she will have to push that wish to next year. Looks like everyone has a satanic 16 in mind instead. There is some dark magic brewing here with a lot of cult and devil worshipping activity. In the words of another famous witch, “Are you a good witch or a bad witch?”

The production design looks incredible. Netflix is strong-arming us on the next Stranger Things drop, but Sabrina looks like the Halloween binge we’ve been craving. Greendale is decked out in pure gothic glam. Beyond living in a funeral parlor, the town features a spooky bookstore, dark woods, and some serious Halloween decorations. And saving the best for last, a last-minute Salem cameo! The cursed cat is known for serving some serious sass, so here’s hoping he puts all of these devil worshippers in their place.

A witch’s 16th birthday is very special. The Chilling Adventures of Sabrina tells the story of Sabrina Spellman (Kiernan Shipka), a half-witch half-mortal teenage girl. She’s been waiting her whole life for her 16th birthday, but something wicked this way comes, forcing her to choose between the path of light and the path of night. A Netflix Original Series from the makers of Riverdale.