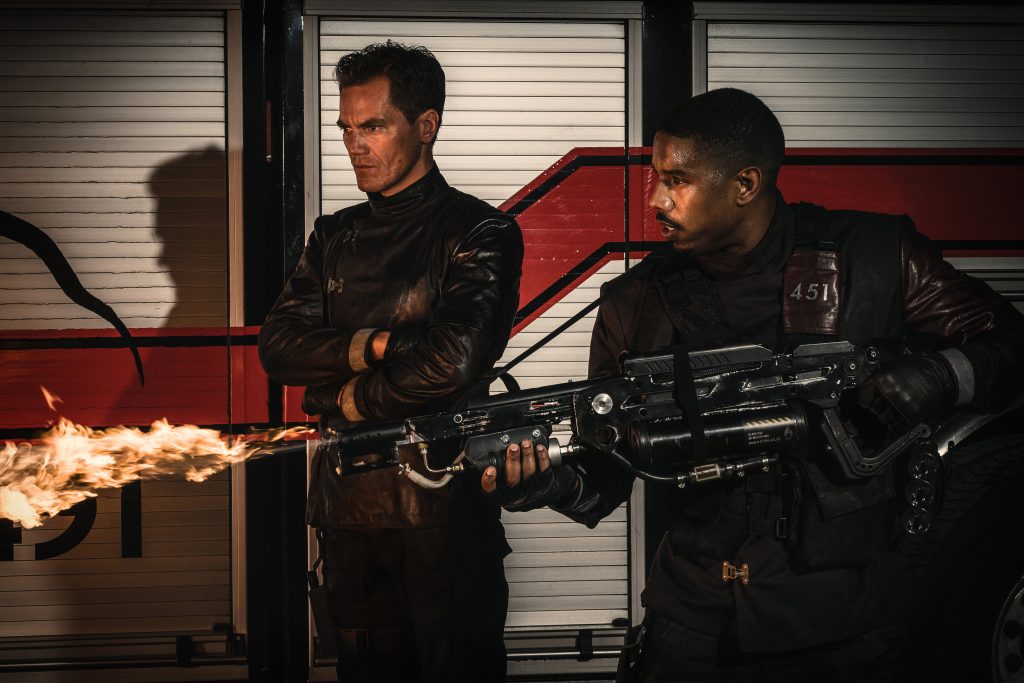 The Meaning Behind the Emmy Nominated Fahrenheit 451 ‘Firemen’ Uniforms

Ray Bradbury’s Fahrenheit 451 has become a gold standard among dystopian novels proving decade after decade the endurance of its message. Ramin Bahrani’s HBO adaptation explored the renewed relevance of the 65-year-old cautionary tale about the government sanctioned destruction of facts and ideas. With a mere 100-minute runtime, every frame had to communicate the rigid rules of the society where Captain Beatty (Michael Shannon) clashed with the book-loving ‘Eels.’ Clothing was hugely impactful in defining the role of the celebrity ‘firemen’ in the story. Costume designer Meghan Kasperlik shaped the characters through their apparel so effectively it earned her an Emmy nomination.

The “alternate future” where Guy Montag (Michael B. Jordan) and his fellow ‘firemen’ set books ablaze called for a very different uniform than firefighters of our reality. Rather than working with hoses, Montag wields a flamethrower. Part enforcer, part idol, Montag’s ensemble is authoritative and cool.

“I took inspiration from the military and how their dress uniforms have such precision and clean lines,” Kasperlik explained. “It makes such an impact when you see all of them together. I wanted to make sure there was this brotherhood and keeping it a clean line, but still impactful and strong.”

Kasperlik conducted research spanning several decades and many miles. Today’s clothing is not that far removed from the 1950s era when Bradbury first penned the story, Kasperlik noted. Historic and cultural factors informed the sleek and shiny suits that made the final design.

“For the most part, clothing hasn’t changed [as far as] the silhouette so much since the 40s,” Kasperlik explained. “We’ve adjusted the waistline a number of times, but clothes haven’t had a dramatic change. I looked at that as far as the uniform as well. I took an element from the 50s, but also, I investigated different firemen. Not only the US but from France and Thailand and China and how I could make this uniform universal.”

Being a fireman in Fahrenheit 451 is less about utility and more about symbolism. Montag and Beatty deal in controlled fires after conducting raids on hidden libraries before publicly broadcasting the burnings. Rather than battling wild blazes, the ‘firemen’ do not need to wear protective gear. What they do need to wear is their rank, signified through colored materials.

“For Michael Shannon, he had a black leather sleeve that came out of one of his shoulders. Michael B. Jordan had the red oxblood that came out and that signifies the rank,” Kasperlik noted. “There are also cadets. They have a red strip, an oxblood strip, that went from their back shoulder and wrapped around their arm as signifying they were junior ranks, but the government still had a strong hold over them.”

Being a fireman is one of the most privileged positions in Montag’s society. However, there is still a tyrannical government hierarchy that can make or break their very existence. A citizen, or ‘native,’ navigates using their fingerprint. The authority will revoke finances and mark fingerprints of anyone found breaking the rigid societal code as a criminal. This control looms over even firemen, ever present in their uniform.

Kasperlik primarily designed the firemen uniforms to make a statement, but also kept cinematic elements in mind. “When we get into the fire, I wanted to make sure that the costumes reflected the light so I put a combination of oil and wax onto the cotton canvas that it was made out of. This reflected the light, also because we shot so much at night and we used a lot of the light from the fire, so it reflected up onto their face.”

The effect had to be visible on camera, but also safe for the actors. “First, you design for the eye and what you wanted it to look like. I wanted it to reflect this light, but then also being around the fire and the flames, I had to take into consideration the safety. [The oil and wax] were washed out for safety purposes and then also treated with a fire retardant. I always design for the look first, and then figure out the safety for the stunt or what needs to happen.”

As Montag becomes more active and sees more resistance to his work, he begins questioning why they burn. Clarisse (Sofia Boutella), a double agent who is both informant and Eel, begins enlightening Montag about the history that has been erased. Resistance fighters, or Eels, are convicted as criminals if caught in possession of books and are cast to the fringe of society.

“They are almost post-apocalyptic,” Kasperlik explained. “Their power for this world is held in the fingerprint. Once the Eels have that taken away, they became almost homeless and have to scavenge for food and trade and borrow. They had a more post-apocalyptic fate, so what I did is I lifted all of their clothing so that there was a really great variety of clothes and then I had a textile artist paint and dye everything so that when we were putting together different combinations, we could have a multitude of layers and different textures.”

As Montag searches for the truth, he struggles to exist in two worlds at once. His fate hinges on being believably loyal to both worlds, which means he must always look the part.

“All of the firemen wear leather jackets,” Kasperlik noted. “Once they’re out of uniform, that was to show that they were a fireman or part of the government if they wore leather. Once he’s loosening up a little and trying to fit in a little bit more, we didn’t put the leather on him. I made sure that he had more of a ‘normal person’ look on, so he goes into a jacket that has an olive-grey tone.”

Kasperlik’s designs create a map of the entire social dynamic of Fahrenheit 451. Each piece has meaning, which Kasperlik says she was given the freedom to create on the film.

“I just loved the project and I loved the process of creating the characters and creating the world that they were living in. Working with HBO they give you so much creative freedom. That was really amazing to create the world with not only the director but the production designer and the DP. Collectively, it was amazing.”