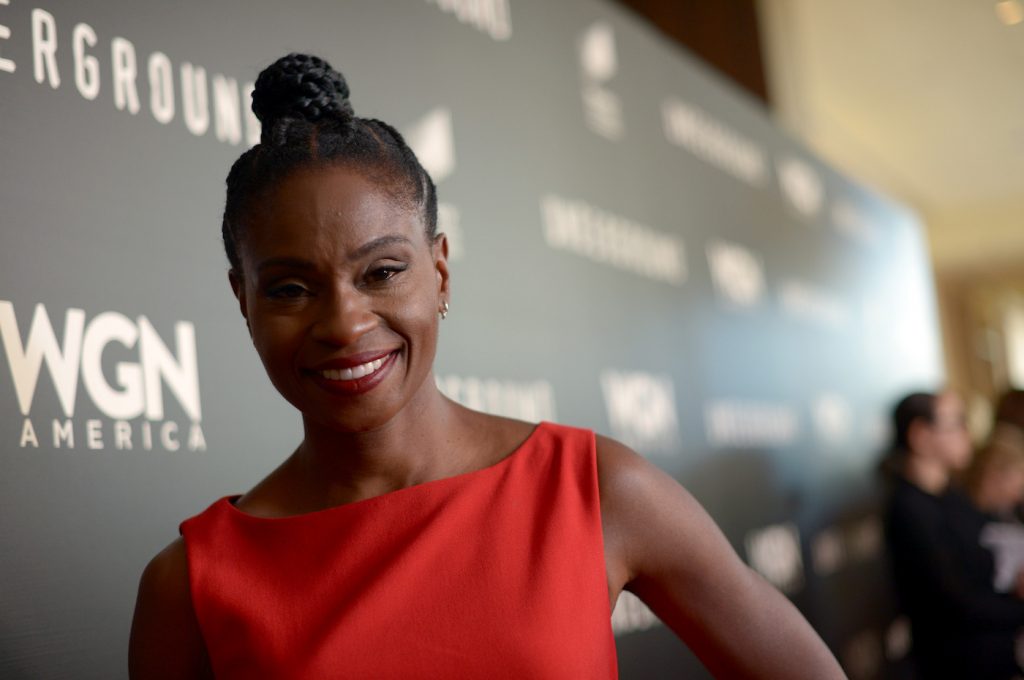 Bronx born and raised with theater roots, Adina Porter’s path to her first ever Emmy-nomination has taken her from the boards to the small screen in some of TV’s most demanding yet delicious roles. Before she became one of Ryan Murphy’s American Horror regulars, you may have seen her Alan Ball’s True Blood on HBO as Lettie Mae Thornton. Lettie Mae was Tara (Rutina Wesley)’s alcoholic mother, a character who was supposed to be killed off in season one but who survived, thanks to the brilliance of the woman playing her, for seven seasons. Lettie Mae alternated between being an alcoholic banshee and born-again Christian warrior in a Louisiana town besieged by vampires, werewolves, witches, maenads, fairies, shapeshifters, skinwalkers, mediums, and brujos (believe me, it’s a thing)—in all that mayhem, Lettie Mae was often the scariest character of them all.

Porter joined the cast of American Horror Story’s first season back in 2011. Her character, Sally Freeman, was described as “the most boring person in the world.” Not the easiest character note to work off, but Porter made Sally her own during her audition. She wore an outfit she’d used for McDonald’s commercials she’d done, which included a green shirt. Everyone else at the audition was wearing black. “They were like, ‘Why are you wearing green?’” Porter says. “I had to tell them that Sally Freeman doesn’t think she’s the most boring woman in the world, everyone else thinks she’s the most boring woman in the world.” Porter got the role.

It would be another five years before Porter returned to Murphy’s iconic anthology series. In that time she worked steadily, including 23 episodes of Aaron Sorkin’s HBO series The Newsroom, where she played the eminently capable Kendra James, a key player on “News Night,” the prime time news show the series revolved around.

In 2016 Porter once again auditioned for American Horror Story, this time for the sixth season, titled Roanoke. “It was a monologue, it had some hints of the character, but nothing directly from the script,” Porter says. “I had to sign an NDA. I know about Ryan’s tendency to use the same actors, so I wanted to do a good enough job to be invited back. I was told they liked my audition, but he went back to look at what I did back in 2011 to see if he still liked that, and he did. I didn’t hear from them for about close a month, then it was right away, you’re working tomorrow on AHS.”

Roanoke was an unusual season of AHS, and an excellent one. There was no release of the subtitle before the season began as their typically was, leaving fans for the first time entirely in the dark about what it would be. When it aired, it was a more stately paced, nuanced story, one that was ultimately profoundly affecting. The first half of the season was as a paranormal documentary series titled My Roanoke Nightmare, in which we follow a married couple whose experiences are reenacted by actors. The couple, Shelby (Lily Rabe) and Matt (André Holland) move from Los Angeles to a house in North Carolina following a brutal assault which left Matt in the hospital and led to Shelby’s miscarriage. They resettled in the very same part of North Carolina that the entire Roanoke Colony had their infamous disappearance. Matt and Shelby are soon being haunted, as well as his sister Lee, played by Porter.

“I was only given my pages, and it was just these interviews,” Porter says. “I did what I thought was right for the character, but I did it in a vacuum, I had no idea what was happening. I trust the writers and the direction, though. You give me the words, that’s my piece of the puzzle, then I let the creators do their work.”

Porter was very good in Roanoke. So good, that by the 8th episode the producers were asking her how it felt to be the lead of the show.

“Inside I was terrified, but outside it felt great!” Porter says. “I just felt like, ‘Thank you very much for this opportunity.’ By the end, I was asked to come back to do AHS: Cult to play a character named Beverly Hope.”

More than any other season of AHS, Cult deals directly with the anxieties and fears of our present day. The story revolves around the fictional city of Brookfield Heights, Michigan, which is riven by the 2016 U.S. presidential election. Trump’s victory shakes a local restaurant owner Ally (Sarah Paulson), exacerbating a bunch of her longstanding phobias, including coulrophobia (the fear of clowns), homophobia (a fear of blood) and trypophobia (an aversion to a series of irregular patterns such as holes or bumps). Other folks in town are either distraught or elated by the results, and one of those people is the frustrated TV reporter Beverly Hope, who ends up playing a significant role in not only tormenting Ally but in the titular cult that springs up in town and soaks the place in blood.

“I remember going for the costume fittings, and the pictures of the faces were covered, so we could just see the costume renderings, they wanted to keep everything so secret,” Porter says. “I loved it, it felt like being back in the theater ensemble, like a rep company, where you were given your piece of the information and you just trusted what all the other creators were doing and going along with the flow. I loved how inventive and creative it was. I was being dressed for this clown suit, but I didn’t know how it was going to fit into everything.”

Porter is sensational as the unhinged, passionately manipulative Beverly Hope, who has a character arc that makes True Blood’s Lettie Mae seem like a quaint figure in a Southern tale of manners. While Porter seems assured of herself in every episode, she appears in (Beverly’s role expands, darkens, and ultimately becomes one of the most important in the season), she remained somewhat in the dark throughout.

“When the clowns and reporters became one, it was piecemeal, and you’d do your take on something, and I’d wait for direction because a lot of times the directors didn’t know everything that was moving forward,” Porter says. “I remember being three episodes into AHS: Cult and called in to re-do some of the vocal interviews because they wanted to punch it up a little bit more. The sense of my character changed in the writer’s room, so they had to come back and ask me to make it more reporter-ish,” she says. “It’s a little bit like throwing mud on the wall and seeing what sticks, and now I know because I’ve been in it a little bit, that I can tell the writer’s and director’s that I have this idea, is it a thumbs up or thumbs down? Sometimes they say thumbs up, sometimes they say thumbs down, and sometimes they say, ‘Hold up, let me ask someone else.’ Then they’ll come down to the stage and let me know, and it’d be that way throughout.”

Porter describes her Emmy-nominated work on Cult like having a compass rather than a map. She knew the general direction she was heading, most of the time, but more or less trusted her collaborators to do their part while giving them all she had. While Paulson’s Ally is the one with all the hideous fears, Porter’s Beverly Hope breaks down as much, if not even more, than Ally does.

“By episode 8, they told me that Beverly had to break down completely. She needed to lose everything by the end of the scene,” Porter says. So that’s what she gave them, a mesmerizing, breathtaking collapse. “Angela Bassett was directing, she just looked at me and nodded at me.”

Porter says that once the season was over, she realized how brilliant it was to keep her in the dark.

“As an actor, I’d get information later on and think, ‘Wow, that would have been good to know!’ But then I might have titled the scale a little bit and revealed too much,” she says. “I trust the writers and producers, and they trust us. It’s like a potluck. I’m bringing my dish, and someone else is bringing their dish, and after a while, if the evening goes long enough, somebody takes my dish and their dish and a little bit of wine and garlic and mixes up it together.”

Porter was in her makeup chair for the upcoming season of American Horror Story: Apocalypse when she found out about the Emmy nomination. One of the makeup artists confirmed it for her by going to the Emmy’s website and showing her that her name was, indeed, listed. After 30 years of giving her all to her profession, she was being recognized by her peers.

“It said Adina Porter, nominated for Limited Series, and I started to cry. The makeup people, said, go ahead and cry.”

“Sarah Paulson told me to have fun,” Porter says. “Your life’s not going to change, it’s not like all of a sudden everything comes rolling in. You’ve still got to prove yourself. I feel like I’ve done good work, I feel like when I was doing Beverly Hope, I’m doing what I feel is the best work of my life because of the twists and turns that she had to go through. These long monologues, you did these on camera, because AHS never does voiceovers. Ryan wants you to do it for real in front of a camera, but I didn’t know that until it was like episode four, the one I’d submitted for my Emmy nomination. Beverly Hope had so many monologues as a newscaster; they’d squeeze it in between other scenes, they’d say, ‘It’s just Adina in front of a camera, she can handle it. Can you can memorize this by the time we shoot?’ So I say yes, sure, and they’re doing the blocking, the lighting, and I’m working on my pages. Then a train goes by, one of those long cargo trains, which gave me an extra five minutes to learn this monologue. By the time the train passed, I’d memorized the monologue. After two takes, I got it.”