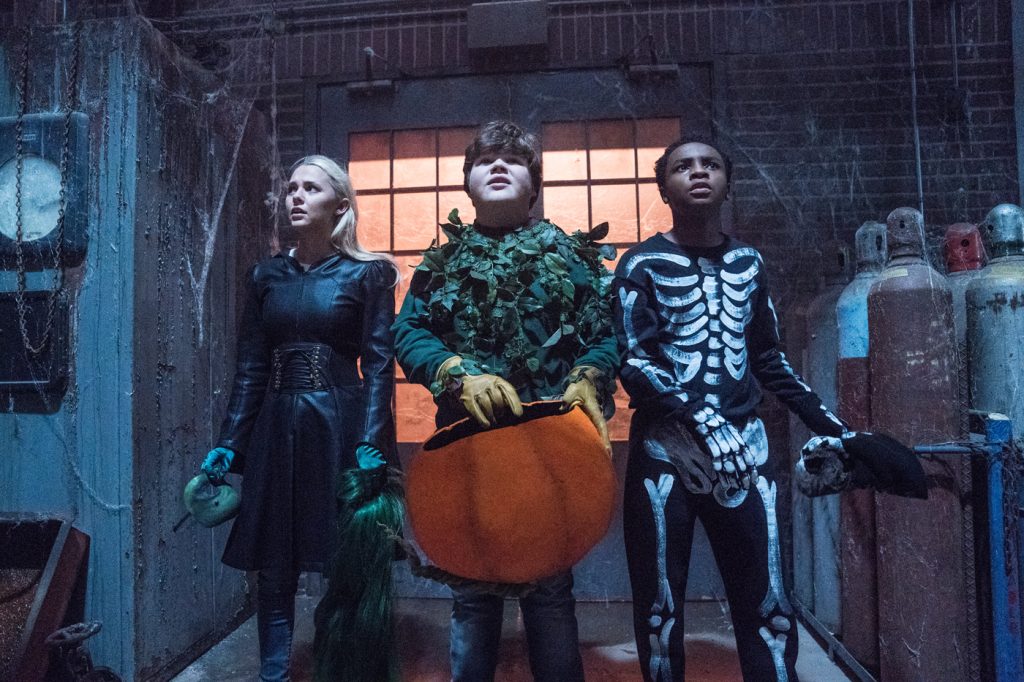 One Book is All it Takes to Release the Monsters of Goosebumps 2: Haunted Halloween

What has happened here? When last we saw famed author R.L. Stine, all of his literary creations were safely back in their books. Well, almost. With the exclusion of Zach’s (Dylan Minnette) new lady love, Hannah (Odeya Rush), and the Invisible Boy. For the most part, Madison, Delaware had been saved from demolishment by monster and had a mostly happy ending. Now, Stine’s house is dilapidated and abandoned and the scribe himself is nowhere to be found. All that remains is a single book, and there is nothing more dangerous than a book.

Remember all the fun we had running from R.L. Stine’s classic stories come to life like werewolves, gnomes, and killer fly traps? Goosebumps 2: Haunted Halloween brings all the monsters back just in time for their favorite holiday. Two friends explore Stine’s dilapidated home and make a magical discovery. A single book that releases Slappy, the smartest and most conniving of Stine’s characters. This time, one book is all it takes for Slappy to turn an entire party store into a magical monster reunion.

The trailer is full of action and pretty detailed, but there is still a major mystery left unanswered. Like, where is everybody? Stine, Zach and Hannah seemed pretty happy at the end of the last film and now something horrible seems to have happened to them and no one is talking about it. Can we get a #WhereDidStineGo campaign started? Here’s the only synopsis that has been released so far, which makes no mention of any characters at all:

Halloween comes to life in a brand-new comedy adventure based on R.L. Stine’s 400-million-selling series of books. The film is directed by Ari Sandel, written by Rob Lieber, and produced by Deborah Forte and Neal H. Moritz.

In reality, the cast probably had scheduling conflicts for the sequel, but I would still like to see them connect the dots. Among the new cast is IT star Jeremy Ray Taylor, Castle Rock’s Caleel Harris, and two of the funniest people on the planet, Wendi McLendon-Covey and Ken Jeong. Unfortunately, we don’t see any adults in this trailer, but those are solid choices to fill the Jack Black void.

The trailer has that air of mischievous adolescent fun that the first film captured so well. Childhood monsters run amok is just going to be a blast, but I have to give props to the Goosebumps VFX team. These might be lighter fare than an R-rated horror film, but the creatures look so alive. The design here really blends well together and tone might be campy, but the design is not.