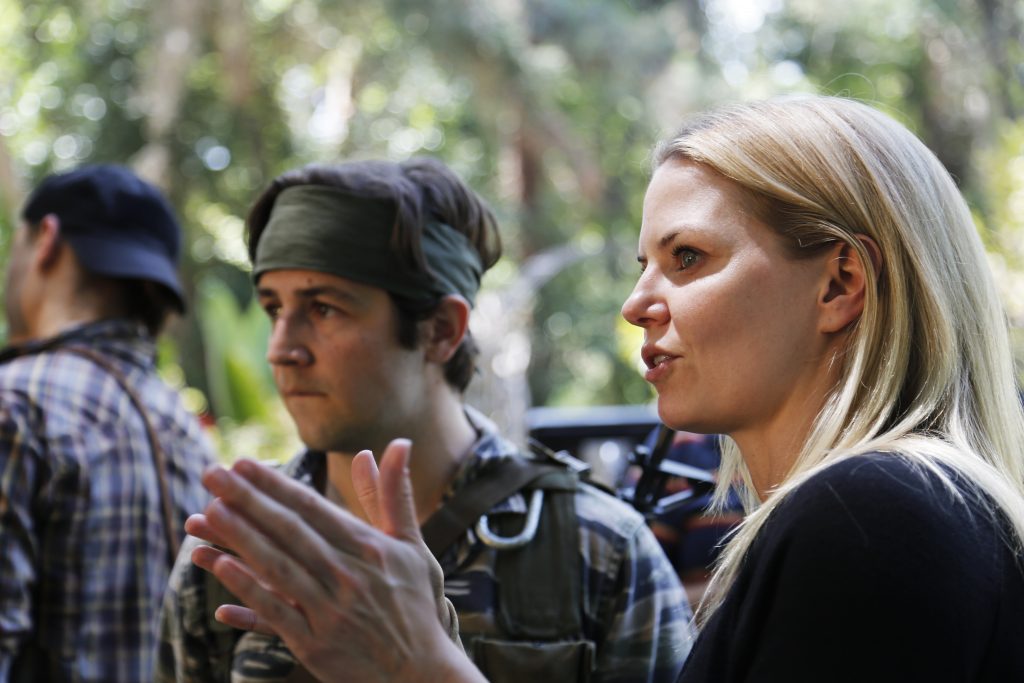 Jennifer Morrison has created some of the most lovable characters on film. Dr. Allison Cameron in House, Emma Swan in Once Upon a Time, and Winona Kirk in Star Trek are all strong and captivating women we love to watch on screen. Now, Morrison is shaping compelling new characters from behind the lens in her feature film directorial debut Sun Dogs.

Now on Netflix, Sun Dogs follows Ned Chipley (Michael Angarano) in his misguided attempts to become a national hero. He becomes fixated on joining the Marines and, after repeated rejection, formulates a plot to fight terrorism at home. Convinced his life serves a greater purpose, Ned struggles to find where he can make a difference. His attempts greatly impact and ultimately inspire the lives of his mother (Allison Janney), step-father (Ed O’Neill), and new friend, Tally (Melissa Benoist).

“There are these wild ups and downs and realizations that they have to have about themselves, and you end up seeing Ned have a chance to find the one thing that makes him really special that he can offer the world,” Morrison said. “You see the way his naiveté and his innocence in how he sees the world impacts all the people that are around him and you get a chance to see how the interactions between human beings can really be very subtle but actually be very powerful in the long run.”

Ned’s story is filled with failings and heartbreak, but Sun Dogs never indulges in disappointment. The atmosphere is eternally optimistic and the characters are supportive and caring. Thanks to soft tones, warm colors, and an intimate environment, a story that could be despairing is hopeful instead.

“I made a really extensive look book for the film right around the time that I optioned the script and it’s pretty amazing to go back at that look book and see how true to that vision the film is,” Morrison said. “I always saw that there was this vulnerability to all of the characters and that this is the greatest journey any of us take in our lives – trying to find our purpose and mission and what it is that we have to offer the world. There’s something so tender about that and I think the visual storytelling represents that in some way.”

Sun Dogs is sharp and leaves no loose ends, despite having only nine days of prep and 18 days of shooting. Morrison dug into the script and identified one of Ned’s character traits as a perfect device for connecting story. Throughout the film, Ned has an attachment to a typewriter that emerges as a character in its own right. Morrison used the prop to set the tone across scenes.

“I had to be really efficient and really thoughtful of the fact that I was put in a position where a lot of the scenes had to be shot in one take, but that left me no room to edit or cut things out or change things later unless I created a device that allowed me to do that,” Morrison explained. “We had it in the plan from the beginning to use the typewriter as a way into Ned’s mind and a way to connect with where he was at emotionally at any given moment. I knew going in that it was critical for me to have a device that serves the storytelling, but also serves what my limit was time-wise.”

Morrison explained that the brief shooting schedule forced the cast and crew to stick to a clear plan not only for the sake of time, but also visually and creatively. Everyone on their set had to be on their A-game.

“I always say to people your first job as a director is to hire as many people as possible who are far better than you at everything,” Morrison laughed. “You just hire people who are really, really, really good at what they do and trust them and have a plan and stick to it and hopefully you can get there.”

One of those people was casting director Tamara Notcutt. Her work speaks for itself with Allison Janney, Ed O’Neill and Xzibit in lead roles. Not only do they each bring incredible talent to the film, but the chemistry between the characters is natural and relatable.

“She and I have very similar sensibilities in terms of acting style and taste, so it’s amazing how much I can rely on her to come up with ideas and different plans,” Morrison said. “Once I thought I even had a chance at asking Allison Janney, then of course I was like, ‘If we have access to her.’ She’s a hero of mine. She’s someone I’ve admired my whole life. I felt the same way about Ed O’Neill playing Bob. I just couldn’t get it out of my head. I was like, ‘It’s got to be him.’”

Morrison, herself, appears in the film as a supporting character and says there’s a place for both acting and directing in her life. With more than 300 episodes of television and dozens of films in her career, Morrison said every experience has helped her to be as prepared as possible for the new role.

“I love acting, and I’m always going to be acting in some way, but I really enjoy the whole process,” Morrison said. “I enjoy the collaborative experience. I enjoy putting together a creative team. I enjoy finding the vision for something and going after it in a way where you have to climb a mountain to figure out how to achieve your goals with something. I’m very happy doing it, I feel very fulfilled, so it felt like a natural progression to add directing to what I was doing for a living.”

Sun Dogs begins another intriguing volume of Morrison’s career. A strong cast, gripping story and crisp voice confirms this is what she is meant to do. Her directing catalog is likely to end up just as impressive as her on camera work.

“I feel responsible as a filmmaker,” Morrison said. “You want people to walk away feeling like there’s a reason you asked them to sit through 90 minutes of something and walked away from the script feeling moved by the journey that the characters went through and moved by the overriding story.”

Featured Image: Michael Angarano and Jennifer Morrison on the set of Sun Dogs. Via Netflix