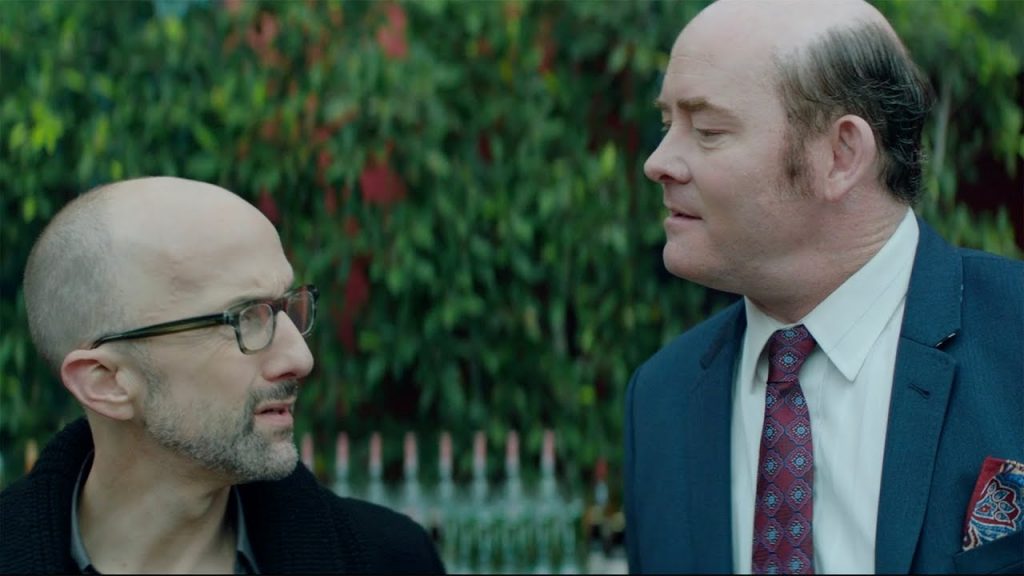 Bernard and Huey is a new film based on an old script. Jules Feiffer wrote the screenplay decades ago, but very little updating was needed for a beautifully performed (and partially Kickstarter-funded) movie that is almost a companion piece to Feiffer’s screenplay for Carnal Knowledge. Both films center on a long friendship between two men, one who has many short-term affairs with women and the other who, at least initially, is near-desperate to get any women to spend any time with him at all. David Koechner and Jim Rash play the title characters in the present day. In an interview, Feiffer talked about what has and has not changed since he wrote the script in our complicated conversations and relationships.

Would you call Bernard and Huey friends, either in the flashback scenes or today?

Yes, the best of friends, in the honored tradition of male friendship.

How much of their relationship is based on envy?  Or is it what Nichols and May called “proximity but no relating” — a kind of friendship inertia?

Those two brilliant and unsurpassed performers were talking about male-female friendship (and this was back in the late fifties. Male-female relationships are, despite the bullsh*t, more open today, heterosexual men are now permitted to be non-sexual friends with women, without charges of being gay. Of course, gays, as always, can be far more intimate and understanding of women than most straight men). Bernard is envious of Huey, and would die to have his un-ambivalent certainty about everything. Huey keeps Bernard around as a house pet.

What updates were necessary?

All the changes from the original seventies version were talked over with Dan Mirvish, the producer-director, and, at my request, he added them to the script. I was on deadline with my “Kill My Mother” noir graphic novel trilogy, and simply did not have time for rewrites. [Huey’s daughter] Zelda becoming a graphic novelist (with [her boyfriend] Scott) naturally evolved out of my current line of work.

Is the conquest more important than the sex for Bernard and Huey?

Conquest is major with Huey, but he also loves sex, and giving pleasure to women. Once it’s over, he’s indifferent, and wants them out of the way. This point was made more openly in Carnal Knowledge, where it’s clear that heterosexual men didn’t like women, they liked women’s bodies. And once the sex was over, and the cigarettes smoked, they wanted the girl gone, so they could go out with the guys (their real relationships), and talk about how, and with whom, they scored. Bernard would love a real relationship. He’s just too screwed up to maintain one.

My favorite scene is the “Put your shoes on and I’ll walk you to the subway” scene, where Huey just repeats that line over and over to a girl who won’t stop talking after their night together.  Tell me how that came about and what it shows about the characters.

“Put on your shoes…” was, I believe, the first or one of my first Huey strips in The Village Voice, and the point of it was that young, college age women of the time were indifferent to their male, college-educated counterparts, but were catnip to the thuggish Stanley Kowalski wannabes that they met in bars, or parties. Like Bernard, I suffered, in my late twenties and early thirties, the sexual indifference of bright, educated women, who thought of me as a friend, and, therefore, of no interest sexually. So, for a year or so, I tried out my Huey imitation: rude, hostile, arbitrary, controlling…and I made out very well. But the day came when I decided, if that’s what it takes to get laid, I’d rather be celibate. Fortunately, a short time later, I started to get famous, and, as long as I was famous, I could get laid in the guise of Jules Feiffer.

Are Bernard and Huey appealing to women?

As older men, they appeal only to women old enough to be their wives, with whom they have very little interest. They crave young women, who make them feel ageless, and who have little, or no interest in them. So they pursue them obsessively.

Do you try to translate the visuals of your drawings into verbal descriptions in a script?

No. I work in different forms, and each has its own rules and preferences. When I write and draw a cartoon, the cartoonist in me takes over. When it’s a play or screenplay, I shelve my cartoonist identity, and do what I must as a writer. The joy of graphic novels is that I’ve found a way of combining all my separate identities into one. So that’s all I’m interested in doing now.