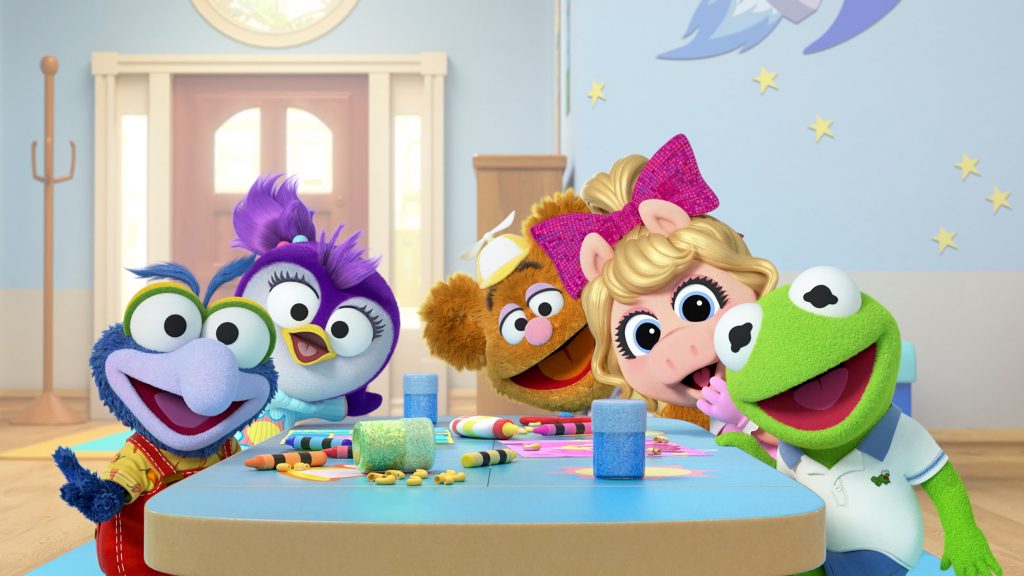 There are few American icons that have been more places, done more things, and spread more joy than the Muppets. Miss Piggy, Animal, Fozzie, Gonzo, and of course, Kermit, are always game for an adventure. Music has always been an integral part of their career as entertainers. Andy Bean pens catchy tunes while composer Keith Horn writes the score for a younger generation of Muppets fans. And also, a younger generation of Muppets. Disney Junior relaunched Muppet Babies in March featuring the puppet heroes in toddler form. Whether they are solving a mystery, rocking out, or sailing the high seas, the Muppets have a song for it all. Bean and Horn immediately gravitated toward the project.

“I was so excited when I saw this come across,” Bean remembered. “I actually happened to be colossally busy the two weeks that I had to work on my songwriting submission. If I had to not sleep for two weeks or even miss a couple deadlines so I can submit for this, I [was] going to do it, and it worked out.”

After Bean brought Horn onto the project, the music writing duo turned to the source material for inspiration. The original Muppet Babies launched in 1984 and ran for eight successful years, but Bean and Horn started their research farther back.

“For the Muppet Babies, I think the deeper reference is the original Muppet Show and the Muppet movies,” Bean said. “At least stylistically. I’d seen all the Muppet Babies when I was a kid, but when I actually went back and looked at it I was like, ‘Oh there’s a lot of soft electric piano ballads, and a lot of doo-wop.’ I really dug [that sound], but it ended up not being the exact vibe of this show. It’s more original Muppets that were the touchstone for me.”

“For the sound of the score, I ended up starting harkening back to The Muppet Show because I grew up watching the original Muppet Show and the Muppet Babies,” Horn added. “I thought, ‘Why not start with a little pit orchestra of half a dozen musicians, like they have in The Muppet Show and build it out from there as the stories get larger on the show?’ As they go on their adventures they go everywhere, so we end up using the full orchestra. A lot of times it comes back to that initial, small pit band kind of sound.”

The new iteration of Muppet Babies is vibrant in color and style. The characters are extremely active and playful. Kermit, Fozzie, and even newcomer Summer Penguin follow their imaginations on energetic adventures. Each episode takes the Muppets to a new setting anywhere in the world and any time in history.

“We have six completely different personalities and every episode they’re in a new place and all those personalities are dealing with the new place, and a new challenge, and someone’s feelings get hurt, and someone takes responsibility for that,” Horn explained. “There’s these location changes and these dramatic changes and emotional changes. Trying to make that sound like one coherent musical idea is the biggest challenge of the show, for me.”

The themes on Muppet Babies are crafted for young eyes and ears, but Bean and Horn never play down to their audience. The show dips into Western, Disco, Broadway showstopper styles and more. Bean previously worked on Disney Junior’s Puppy Dog Pals and said the network has always given him room to be creative.

“I was nervous that I would be asked to simplify, or make less sophisticated or interesting music, either lyrically or instrumentally,” Bean said. “I’m happy to report it’s almost never the case. The only times where I ever have to specifically think about the younger audience, you just have to lay off the twenty-dollar words.”

Horn said he has had the same experience with the score, but there is one area that requires extra sensitivity for young viewers: moments of peril.

“There’s an example in ‘Sir Kermit the Brave’ where they’re using the rolling ball from Raiders of the Lost Ark, and they’re quite literally running for their lives,” Horn explained. “There isn’t a more terrifying scenario in a show. The challenge for me was to try not to make it too scary because it is for kids. I knew that note was going to come if I made it too scary, and sure enough it did. I made it a little too scary so I had to back off and find a way to still say, ‘Run for your life, but you’re still going to be okay kids, don’t be too scared.’ That was a big challenge because it is a show for kids.”

Bean has a target audience right at home to test new songs on. The songwriter has two daughters, ages three and six. It is hard to imagine a cooler job for a dad to have at that age than creating cartoons. They get the first listen and share their opinion.

“They hear almost everything, the song demos especially, before it goes in,” Bean said. “That said, they’re three and six, so I don’t 100% trust their taste. I use it as a resource, but they don’t have veto power.”

While it’s important to keep the Muppet Babies audience in mind, Bean and Horn foremost try to stay true to the larger legacy. The Muppets are a beloved institution with a storied history. Now, Bean and Horn are writing the newest chapter.

“When I’m submitting a tune, we call sit back and say, ‘Alright, from the fifty years of perspective we have about the Muppets, does this feel right for the Muppets?’” Bean explained. “And we’ve all—the network, and the showrunners, and us as composers—been on the same page about that and trying to stay true to the spirit of the original Henson creations.”