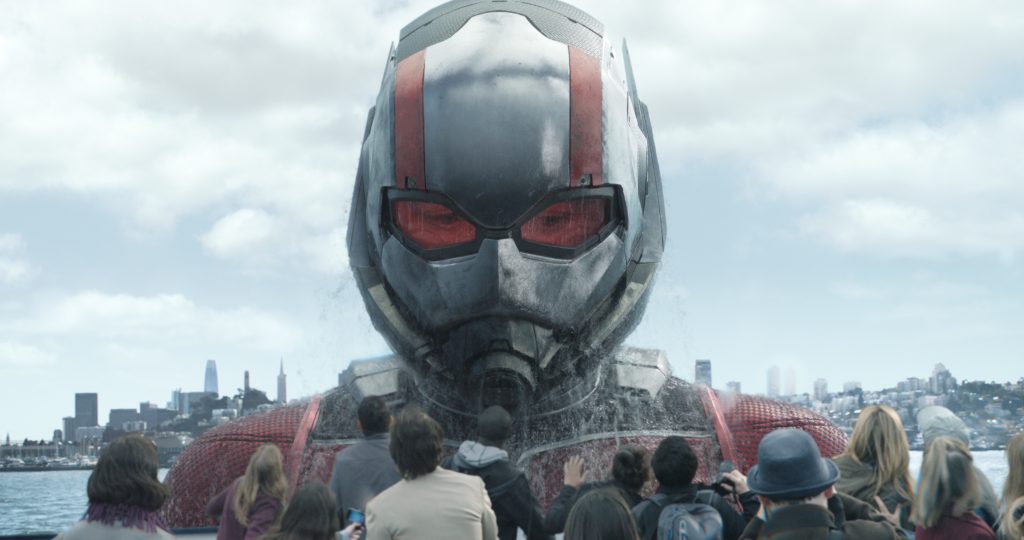 The Marvel Universe is currently a dark, bleak, and despairing place. Hope is a dying ember and evil has prevailed. It’s going to take something really, really big – or really tiny – to lighten our spirits. Cue another fabulously fun Ant-Man and The Wasp TV Spot.

Summer is for kicking back, letting loose, and kicking some bad guy butt. After the devastating blow of Avengers: Infinity War, we need some lighter vibes. Super heroes that can instantaneously change from the size of an insect to sixty feet tall should do the trick. The new trailer has an awesome new look at Ghost (Hannah John-Kamen) exploring her intangible powers. This character has a lot of potential for awesome on-screen moments. Being able to pass through walls is something of a unique character trait that seems to blend well with the unusual abilities of Hank Pym’s (Michael Douglas) suits.

Speaking of, Evangeline Lilly is so super cool, it’s kind of insane. I can never get over that clip of her slamming out the back of an SUV and swinging around into the driver’s seat. If that isn’t peak summer movie action, I don’t know what is. Even though Hope van Dyne is the newest member of the team, she’s really fearless and comfortable in the suit. Being able to change size has a surprising number of applications and she gets really creative with it.

Of course, we haven’t even gotten to Ant-Man (Paul Rudd) himself who is going for the record of largest size in the suit. He mostly uses it to entertain tourists in this clip, but we know it will come in handy against Ghost.

Lastly, we had almost forgotten the pure joy of hearing one of Luis’ (Michael Peña) super enthusiastic stories. That was for sure the best gimmick of the original Ant-Man and we’re glad to see him back in joke-cracking form. He’s the scene-stealer in this TV spot. Come on, guys. Give him a suit. He can handle it.

Ant-Man and The Wasp flies into theaters July 6.