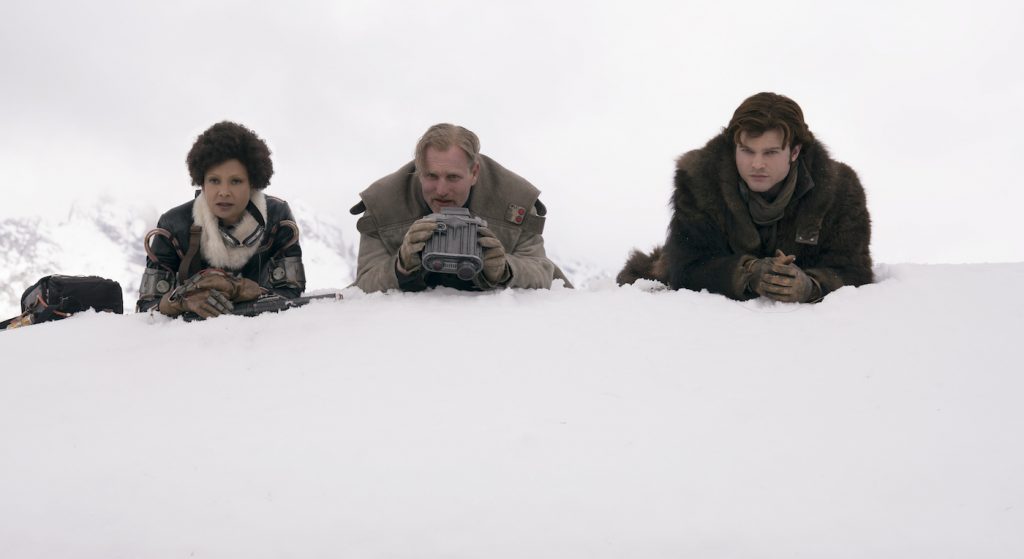 As we rapidly approach Solo: A Star Wars Story‘s May 25 premiere, Disney is giving us a look at some of the film’s major players, which finally includes Thandie Newton’s mysterious character Val. A new clip that aired on Jimmy Kimmel Live not only features Val, but shows her actually speaking. Turns out, Val’s seriously tough, and the moment she threatens Han Solo (Aldren Ehrenreich) proves that in the world she comes from, unholstering your blaster is not an uncommon occurrence.

We learned a bit about Newton’s feelings about Val in mid-April, when she told Radio Times that not only was her Val the first woman of color to have a prominent role in the film (she mentioned that Lupita Nyong’o’s Maz Cantana is a computer-generated character), but that she’d even “have a toy and everything.” That toy could be her custom blaster, a droid, or a ship, but whatever it is, we’re now convinced Val will be able to handle it. We know she’s a member of Beckett’s (Woody Harrelson) crew, which means that eventually, after her desire to shoot him subsides, she’ll be partnering up with Han and Chewbacca (Joonas Suotamo).

The clip features Val and Beckett in criminal plotting mode, with the two veteran smugglers are planning a job during an Imperial assault, no less. What’s more, Val seems to be confident to the point of reckless. As she discusses what they’re up against, she says, “I can take out the guards at the perimeter, signal men, pilot, hell, I’ll just take them all out.” This is when Han appears behind them and wants to know what they’re up to, which Beckett finds…frustrating. Cheeky Han quickly assesses that Val and Beckett are “thieves here to steal equipment for a job, and I want in.” Val’s reaction to this is priceless, and gives us hope that this level of tension remains taut throughout the film.

What Han is pointing out to his new friends is that, although they may be veteran thieves and are disguised as ground troopers, they’re a little obvious—Beckett’s uniform has laser burns all over. “Either you heal real quick, or you stole it off a dead man,” Han accurately points out. As i09 suggests, the scene likely takes place on Mimban, which is a setting in the Expanded Universe, only with Han’s backstory tweaked. In the original Expanded Universe, Han was an ex-Imperial soldier who was steadily being promoted because of his pilot abilities, but eventually he became disillusioned and left. i09 speculates that Han’s backstory in Solo may have him as a ground trooper stuck on Mimban, with no opportunities to fly, get in trouble, and generally act like Han. Then he sees Beckett and Val, two obvious thieves up to no good, and voila—Han’s a part of the smuggling business.

This is still mostly speculation, but it’s based on a lot of Star Wars canon and Expanded Universe knowledge. We’ll find out for sure when Solo finally hits theaters on May 25.