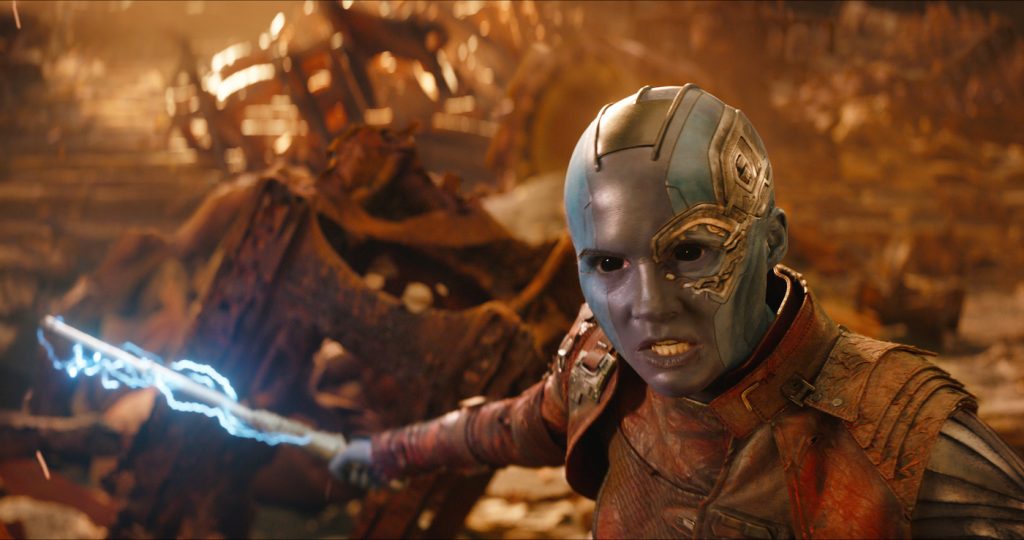 The Supervising Art Director for Avengers: Infinity Wars on Mixing Many Worlds

At two-and-half-hours, Avengers: Infinity War might scare off superhero-movie detractors, and that would be too bad. Though most Marvel titles at least attempt to inject humor into their scripts for broader appeal, the jokes in Infinity Wars always land, no matter where that land might be. In Anthony and Joe Russo’s mega-blockbuster, most of the Marvel universe comes together to fight Thanos (Josh Brolin), a suddenly emotionally complex giant on a complicated mission he believes to be essentially good: population control.

Unfortunately, rather than choosing to hand out birth control leaflets and support women’s education and independent family planning with the wealth the three Infinity Stones he already has have surely brought him, Thanos is on a mission to find the remaining stones, which include the Time Stone, worn by Benedict Cumberbatch’s Dr. Strange, the Mind Stone, which is still screwed into Paul Bettany’s Vision’s head, and the Soul Stone, location unknown. Once he’s got all the Infinity Stones, he can do away with half the universe with the snap of his fingers. The film sees the Guardians, Avengers, and Wakandans (who have all the best one-liners) come together to stop him, putting aside some internal struggles in the process, and forging a few odd but endearing alliances. Thor and Rocket Raccoon, for example, could’ve used even more on-screen time together in this already lengthy epic.

Given the film’s wide-ranging, distinct locations, putting together its overall look was hardly a matter of recycling odds and ends from the Marvel library. We chatted with supervising art director Raymond Chan about getting the aesthetics right.

You’ve worked on a few Marvel titles. How do you balance consistency with the prior films with bringing fresh aesthetics to Infinity War?

That’s an interesting question. Each film that Marvel [puts out], it’s always a very involved process, for myself and Charlie [Wood, production designer], each one is unique and a challenge. Guardians of the Galaxy is different to Ultron, which is different to Dr. Strange. Infinity Wars was probably the biggest challenge. It comes off as a collaboration, working with a great studio like Marvel. There are great scriptwriters, directors, they bring a lot to the table. They’d come up with ideas, first, and we’d bounce of that.

Can you tell me about the process of designing chaos and destruction in New York these days?

Obviously, we’re first briefed by the Russos, and we’re based in Atlanta. We work closely with a brilliant location team we’ve worked with before, and we scout possible locations around Atlanta. We found a street, we signed contracts, built facades, and turned it into downtown Greenwich Village. The Atlanta film commission and people of Atlanta were behind this project, and allowed us controlled explosions and effects. That whole sequence was shot in downtown Atlanta. When Hulk first crashes through the Sanctum Sanctorum, that was a practical set. Then Tony goes through the front door, he went from interior stage to exterior set.

How was your international filming experience? Were you on set in Scotland and England?

The only part that was shot in the UK — Vision and Wonder’s apartment — was in Edinburgh. We redecorated it. And the whole fight sequence in Parliament Square and Waverly Train Station, they were both practical locations. We scouted, set up an art department. Actually, I had three art departments, with about 100 crew, one in the UK, then they migrated to Edinburgh, then LA, and Atlanta.

Marvel titles tend to prioritize a humorous element, and Infinity War, particularly so. Do you get to reflect that in the art direction in any way?

The Guardians are unique films, themselves, that comes from [director] James Gunn and his relationship to the actors. Anything from the Guardians is always fun, I feel, and we try to reflect that in the set. With Infinity War, it was more about the characters. The Guardians are only on their spaceship, then they get separated. They weren’t in the Guardians worlds, they were in other worlds.

What was the most difficult sequence or scene to put together, aesthetically?

I can’t single out anything in that film. I think most of it was very difficult to conceive. It’s always a big challenge to come up with something original, which is exciting, at the same time. Maybe coming up with Titan, or Vormir, everything’s a challenge, because we have to create these worlds, either in concept or the ground the actors are standing on.

Does it make your job any easier to work on a movie that has overlap with other films? For instance, do you go to the art director from Black Panther to get pointers on how to re-create Wakanda?

I think Charlie worked closely with Hannah [Beachler, production designer], they had a couple conversations. There’s always overlap, since we’re in the same studio, so there’s information we share anyway. But we’re also given freedom at the same time. It’s a collaboration.

The end of the movie was shocking, but beautiful. Without revealing any spoilers, would you say that the loveliness of the setting of the final scene was supposed to reflect a sort of ambivalence as to what happened?

I think for me, the fact that [the character in the last scene] sat there contemplating, he’s got whatever he searched for, and it’s almost like he’s at peace with himself, so that for me was symbolic in itself.

Will you be working on the sequel, and can you tell us anything about it?

I’m working on Avengers 4 and we can’t tell you anymore. But it’s going to be even bigger, and better.