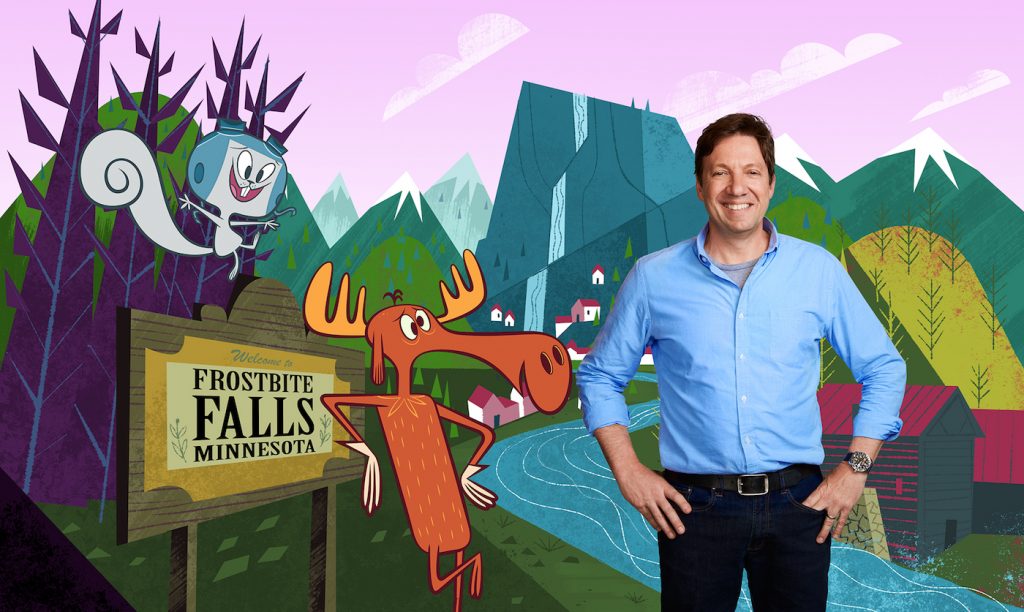 When you hear the executive producer of the new DreamWorks show The Adventures of Rocky and Bullwinkle, Scott Fellows, speak about this cartoon, you can hear the passion that he and the entire cast and crew must have put into it. Gratefully, all that enthusiasm shows up onscreen. From the opening credits to the artistry of backgrounds and the writing, they have crafted a reboot worthy of the fans of the 60s classic.

We spoke to Fellows about some of the elements he believes make the new show so special.

You’ve got a series of serialized stories this season.  Three movies, essentially, right?

Yes. Because the landscape of how people watch shows has changed so much, we decided to do three movies, with four or five chapters in each. Keeping with the tradition of the original, The Bullwinkle Show, where you have the “Previously on Rocky and Bullwinkle.” So the first season of The Adventures of Rocky and Bullwinkle on Amazon is set up in three different movies or adventures. We’ve got one spy adventure, called The Stink of Fear, which takes place partly in Paris, and guest stars Gordon Ramsey. The second one is Dark Side of the Moose, a space epic, and then the third, Moosebumps, is a sort of monster B-movie. We are continuing the tradition that Jay Ward had with serialized episodes. Families can watch one at a time, or they can sit for eight hours and watch it all in one gulp.

The multi-layered structure of Jay Ward’s show, which included humor for both kids and adults, is definitely in evidence. There are so many in-jokes for horror movies fans, or for people who know Paris, for example.

We traveled there, and the artists really got into the catacombs, the monuments, and things like that. We do our research, and everyone really plays into it. It’s such a great experience to have the artists that really look at references in the architecture and the culture, and really get it down. We go international with this, incorporating the whole globe. We wanted to be a little more global. They really are such fun and lovable stories that can, I think, really resonate through all cultures, because they are really just wild, funny, back-to-back adventures.

How did you approach building on such a classic cartoon?

I’m a huge fan. That’s why I took the job, to be honest with you. I was a little bit nervous bringing back something that was done so well, and is so revered and loved. Everybody on the staff, from DreamWorks to Amazon, and all the writers, directors, and artists wanted to make sure we handled this with tender loving care. We wanted to honor the original series, but bring it to a new audience that could enjoy it as much as we did.

Can you talk a bit about the opening titles? You can see all the work that went into them.

That’s great to hear! These three cinematic adventures are movies that hit the sort of classic genres that we all know and love. We thought it would be great to have different openings for them, but that’s a lot of extra work, extra time, and extra money, because who does three show openings? It was crazy, but I think it paid off.

Watching them informs adult viewers that there’ll be references to genres they love in each episode, and so it hooks us in.

We wanted something that was unique and special and funny. It would have been so much easier to have just one overall Rocky and Bullwinkle opening, but we said no. Each adventure should be a different viewing experience. The artists really go above and beyond. Chris Mitchell, our art director, really deserves a lot of credit, as do our animators at DHX in Canada. Again, everyone really loved the show and these characters, and our openings were great examples or results of it.

The backgrounds in The Adventures of Rocky and Bullwinkle are wonderful. They are very reminiscent of the original show, but more hyper-colorized.  Since the show is 2D, they are hand-drawn?

They are! Again, our art director definitely wanted to push the color and intensity, and bring it to the backgrounds in the show. They are works of art, each one.  I have some hanging in my office, and look at them every day. One of the things we tried to do is, while being based in a traditional technique, use all the technology and tools at our disposal.  In all aspects of the show, we wanted to push, in a stylized way, the playfulness and the color. Still, these backgrounds add so much beauty and artistry, sometimes you just want to stop the action and look at them.

You know, there’s not a lot of family programming everyone can find entertaining. I have four children, and they’ll want to watch a particular cartoon with me. I know from experience how it can be to see something over and over. I really wanted this to be something teenagers and adults could not just sit through, but love. With Rocky and Bullwinkle, I am constantly blown away at the artistry. It has care, inspiration, and it’s funny. I really hope that parents can sit and watch it with their kids, and have a ‘couch and cookies’ night. It’s got something for everybody, and it’s just so pretty to look at.  Ultimately though, it’s just about creating something that everyone can enjoy, and I think we’ve done that.

The Adventures of Rocky and Bullwinkle is available on Amazon Prime May 11th.