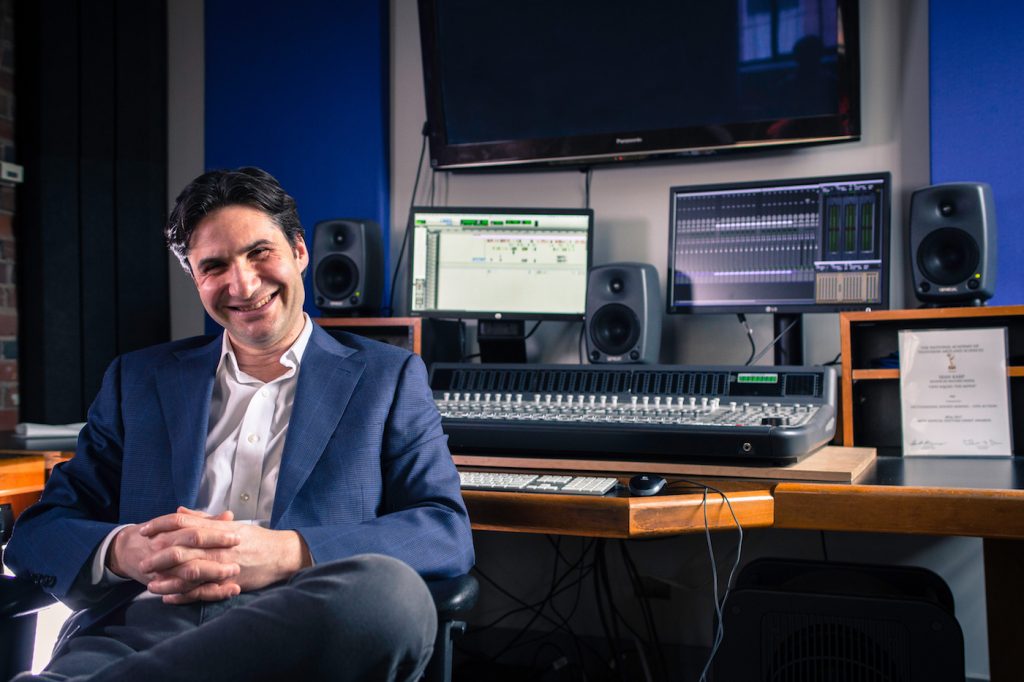 Ten-time daytime Emmy nominee Sean W. Karp is the sound-mixer and editor at Sinking Ship Productions, one of the most prolific production houses in children’s programming, including the series Annedroids, Dino Dana and Odd Squad. Karp began as a musician, playing for bands throughout Toronto throughout the early 90’s. In an interview, he explained the difference between sound editing and sound mixing, the delicate balance of music, sound effects, dialogue that make movies and television realistic but not distracting, and the science and imagination that go into creating dinosaur sounds.

Do our readers a basic service, and describe the difference between sound mixing and sound editing?

Basically, sound editing is taking all your different sound elements or sound files and editing together all the production sound that’s recorded on set when they shoot the film or TV show, which generally is dialogue, and then build a soundscape. That means creating the sound environment, so if stuff is taking place in the city so you will edit in all these background city sounds; the sounds of traffic, the sounds of people walking by, horns honking; that kind of thing. Then you’ll edit in all your specific sounds. Maybe there’s a gunfight, so we’re placing in all those gunshots and the sounds of the shell casings leaving the guns and dropping on the floor. Then of course there’s the music. The composer will create the score, but then a music editor will do some touch-ups to make it work better to picture. So that is sound editing; it’s basically putting to time all the sound elements to the picture.

Sound mixing is mixing all those elements for the final version. I’ve heard it described as almost like when you’re recording an album. Editing is doing all your tracking like I’m tracking my drums, I’m tracking my bass guitar, my lead guitar, my keyboards, my vocals; that’s sound editing, and then the mix is the mix as it would be for a song.

The goal is almost for your work to be invisible, then?

The rule of thumb is: if your work is noticed you did a bad job. The point is to help tell the story, to help the film draw people in and get caught up in the story. So if people are paying attention to the sound, then you really didn’t do a good job because they’re not in the story, they’re not being drawn in. Badly done sound can be much more noticeable than a really good, smooth job. It cuts the suspension of disbelief. A really good movie is going to draw you in, so it’s our job in post-production sound to help the director or the producers achieve that in the final product; it’s all about the experience for the person sitting in the seat.

You’ve done a lot of work on content for children.  Does that change the way that you approach the sounds?

With the shows we do at Sinking Ship, we don’t go cartoony. We want it to feel real, and we want to go with the real fantasy approach. For example, the show we’re working on right now is Dino Dana. Essentially that is a Jurassic Park for young kids. So obviously we’re not going to play up the dinosaurs to the same intensity that you would for Jurassic Park, because the audience’s age is about 4 to 10. But we do want it to feel real, and when you see the dinosaur on screen and hear it, we want to really sell it that this is really happening, that Dana is actually there talking to a Tyrannosaurus Rex. We don’t quite go as gruesome or intense or violent with the roars, but we do play it up as real as we can. We don’t want to talk down to our audience. A lot of programming for kids gets kind of goofy and cartoony. At Sinking Ship, we see it like we’re producing little miniature feature films in each episode and we want to give them something that’s a real experience.

Nobody knows what a dinosaur sounded like so where does the sound come from?

We do try to hold to real science because the shows are educational, not only about prehistoric animals like dinosaurs but also about just the natural world in general. We’ll talk about herbivores and omnivores. So the general consensus right now with dinosaurs is actually that they evolved into birds; that is what current science is saying, and with that, believe it or not we do try to bring in some bird-like elements into the sounds we create for the dinosaurs. Of course there’s a lot of room for imagination and speculation and we take full advantage of that.

Is it a challenge to mix the music, dialogue, sound effects, and ambient sound?

Yes. The composers are always asking for more music, and the producers are always saying, “Pull the music back.” The composer is saying, “I want to hear more of my music; I put too much work into that” and the producer is like, “I can’t hear the dialogue, the music is too loud.” At the end of the day it’s the producer’s show; they’re the ones paying for it. And dialogue is king, so to speak, you’ve got to hear what people are saying. It’s a story.