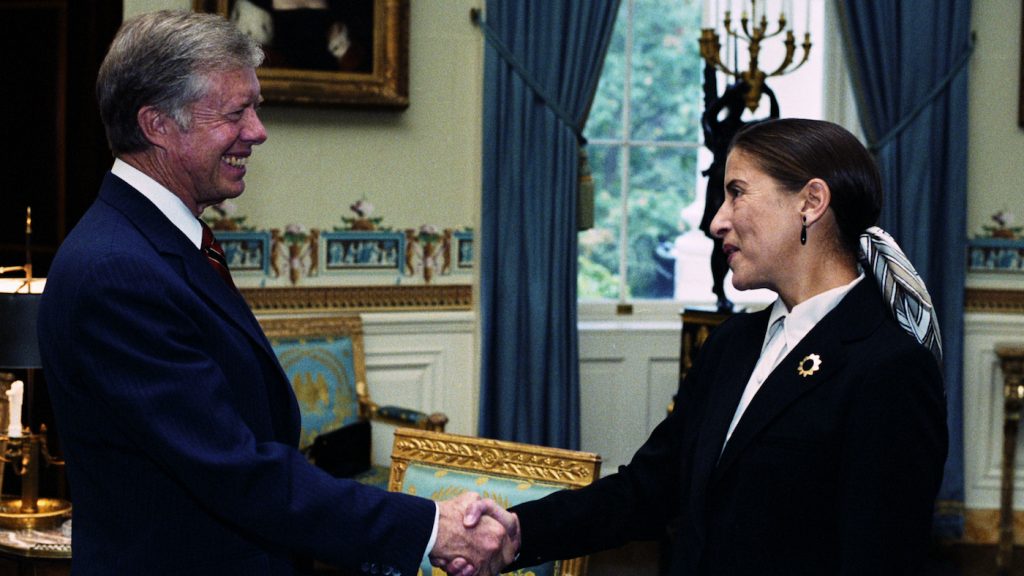 RBG Co-Directors/Producers on Their Groundbreaking Subject – Part I

Ruth Bader Ginsburg – the Brooklyn-born, 85-year-old grandmother of four who became the second female to be appointed as a Supreme Court justice in 1993 – has been having a pop-cultural moment since 2015 or so. That’s when the liberal-leaning Harvard grad was cheekily dubbed The Notorious RBG (a play on the late rapper Biggie Smalls, a.k.a. The Notorious BIG) by a pair of young female writers who saluted this petite powerhouse’s stealthy sense of bad-assery in book form. RBG T-shirts, tattoos, tote bags and even online depictions of Ginsburg as Wonder Woman have elevated her iconic status. Cementing her popularity is Saturday Night Live’s Kate McKinnon’s wicked take on the eldest Supreme.

But RBG, a documentary that premiered at Sundance and opens May 4, goes a step further by exposing her Millennial fan base and beyond to her early years as a groundbreaking lawyer who achieved many female firsts in her professional career and fought for gender equality by taking on landmark cases. The doc will be followed by a biopic this fall, On the Basis of Sex, starring Rogue One: A Star Wars Story’s Felicity Jones.

In Part 1 of their joint interview, RBG co-directors and producers Betsy West and Julie Cohen talk about the reason they chose Ginsburg as a subject, why Millennials place her on a pop-cultural pedestal and their decision to fill most of the key crew positions on the movie with female talent.

Betsy, you bring two decades worth of experience working on network news programs – with 21 Emmy awards to your credit — and also producing docs. Julie, you have done eight documentary features both as a producer and a filmmaker – and have won your share of honors. How did you become a team?

Betsy West: When I was a journalist at ABC, I sort of moved myself into longer form. News magazines and documentaries. This is really the first documentary that I have directed. And, of course, I directed it with Julie, who has a lot of experience as a director. I first met Julie for the Makers project, about the modern women’s movement. It was online documentary project. In 2011, Julie did some of the interviews of the groundbreaking women. And I interviewed, among others, Ruth Bader Ginsburg. That is when we first started. That’s when we first began to talk about this phenomenal woman – really, before she began had gained Internet fame. Julie interviewed Justice Ginsburg for a 2015 film she did, The Sturgeon Queens, about a Lower East Side fish shop, Russ & Daughters.

I know that film and was wondering if Julie sent her lox to lure her to participate in the documentary.

Julie Cohen: The original sending of the lox for The Sturgeon Queens seemed to be quite memorable to her.

West: That all happened really before the Notorious RBG phenomenon. And, in 2015, Julie and I were talking about what a rock star she had become with Millennials and how there was so much more to her story that we thought people didn’t really know about.

I only knew of her after she was appointed to the Supreme Court.

Cohen: Which was true for a lot of people. We were aware of this back story and just thought someone should make a documentary about her and why not it be us.

I was pleased to see that RBG features not just women as directors and producers, but also in many key crew positions. Was that important for this particular film? Does it make a difference ?

West: We hired extremely capable women. Our director of photography, Claudia Raschke, was terrific. And that was the first addition. We wanted a female photographer when we did these shoots with Justice Ginsburg. We thought, “Why not?” I admired Claudia’s work. Our editor, Carla Gutierrez, also is very accomplished. And it just kind of moved from there. Our composer and our producing partners at CNN Films, coincidentally all women. The entire production was really a joy. No major conflicts. A lot of back and forth and respectful discussion.

Cohen: There were some men in the junior positions and that worked out fine, too. Sometimes, women are bosses and men are working for them and it can work out really well.

Why do Millennials gravitate towards her other than her principles and how she comports herself?

West: Really, it was her words in the dissents that she issued. First, in the Shelby County case in 2013, in which she called out the decision that was going to loosen the oversight of voting rights in states that had discriminated against African-Americans. She wrote the memorable line, “It’s like throwing away your umbrella in a rainstorm because you are not getting wet.” And young people with progressive views read that and found it really motivating. They started to put out memes like, “You can’t spell truth without Ruth.”   Then, of course, there is a Tumblr blog that some law student created and calling it Notorious RBG. That just took off.

Cohen: It’s a combination of the serious side of it and the joke side of it. To a certain extent, the whole thing is ironic and Millennials do love irony. This little 85-year-old with the quiet voice and a grandmother, here she is doing push-ups and being compared to a famous rapper. It’s funny. But there is a serious side to it, too. The seriousness of her as a defender and a symbol of that.