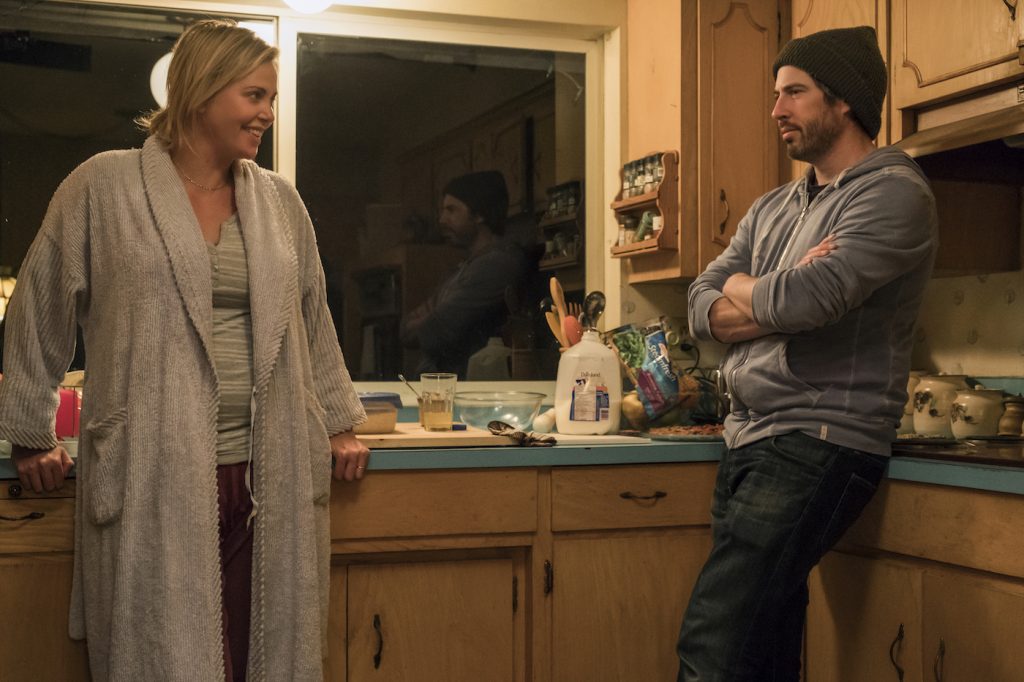 For Jason Reitman’s new movie Tully (opening Friday), Charlize Theron gained 50 pounds to play Marlo, the bedraggled mother of three. By design, Marlo’s unkempt house reflects a character who’s way too exhausted to keep the place looking neat and tidy. Canadian production designer Anastasia Masaro explains the backstory. “Marlo’s home is meant to feel like she and her husband bought the house when their first kid was on the way and they really meant to fix it up.”

But Marlo and Drew (Ron Livingston) never got around to it, so Marlo spends much of her time slouched on a living room couch that looks like it came from craigslist. And in fact, it did. Masaro says, “I find people have been really judgmental about Marlo’s home but I’d like to see everybody else’s house! How many people live in homes that look like they’re out of a magazine? I wanted real people furniture so we purchased the couches off craigslist and bought stuff at used furniture stores. They’re not rich and they’re not poor. They’re just a regular family.”

Unlike the determinedly down-to-earth vibe she conjured for Tully, Masaro earned an Oscar nomination for her extravagantly theatrical sets featured in Terry Gilliam’s The Imaginarium of Doctor Parnassus. “People think Parnassus must have been so much harder, but Tully has the same amount of detail work, whether you notice it or not,” Masaro observes. “The production design for this film is not supposed to slap you in the face,” she says. “It’s a different kind of thought form.”

Subtle touches include a lost-at-sea decorative motif in the house intended to mirror Marlo’s distress. “Marlo’s so overwhelmed she feels like she’s drowning, so we put traces of aquatic life throughout the house,” Masaro says. “The kitchen has sea shell wall paper. There’s a mermaid magnet on the fridge. The bathroom is blue with shell stickers on the wall and we used blue for the bedroom. It’s like Marlo’s submerged.”

Filmed mainly in British Columbia as a stand-in for upstate New York, Marlo’s house had already been scouted by Reitman when Masaro got hired for the Diablo Cody-scripted project. Right away, she clicked with Reitman. “We started out by talking about our personal lives and early relationships,” Masaro recalls. “Because I don’t have any children, we also talked about friends who got married in their twenties and had children and now they’re divorced, or maybe they managed to stay together. Those early conversations were important because Jason understands that production design is not just bringing in furniture or building a set. It’s about building characters.”

Masaro avoided slick architectural references as inspiration, deciding instead to crowd-source images from friends with kids. “On Facebook I asked moms to send me pictures,” Masaro recalls. “People I barely know sent me pictures of their home saying ‘I can’t believe I live like this!’  One couple posted a shot where they’d covered the dining room table with plastic and had diapers and cereal splashed on the table – – it was this great juxtaposition of cool young adults with baby life coming in.”

Marlo believes her cool years are behind her until hyper-energetic nanny Tully (Mackenzie Davis) arrives on the scene and prompts big changes. Masaro says, “We started out with the house in disarray, and when Tully takes over we vacuumed up all the crumbs and took the socks out of the couch pillows and lined up the art. Bringing order back to the place was the easy part.”

Even after the makeover, Marlo’s house pales next to the spotless modernist showplace occupied by her brother (Mark Duplass) and his family. “It’s the total aspirational house, all clean and nice like you’d see in a magazine,” says Masaro. “For Marlo, we did not want to make a set that was aspirational. We wanted to make a house that was true to life.”

Featured image: (l to r.) Charlize Theron and director Jason Reitman on the set of TULLY, a Focus Features release.