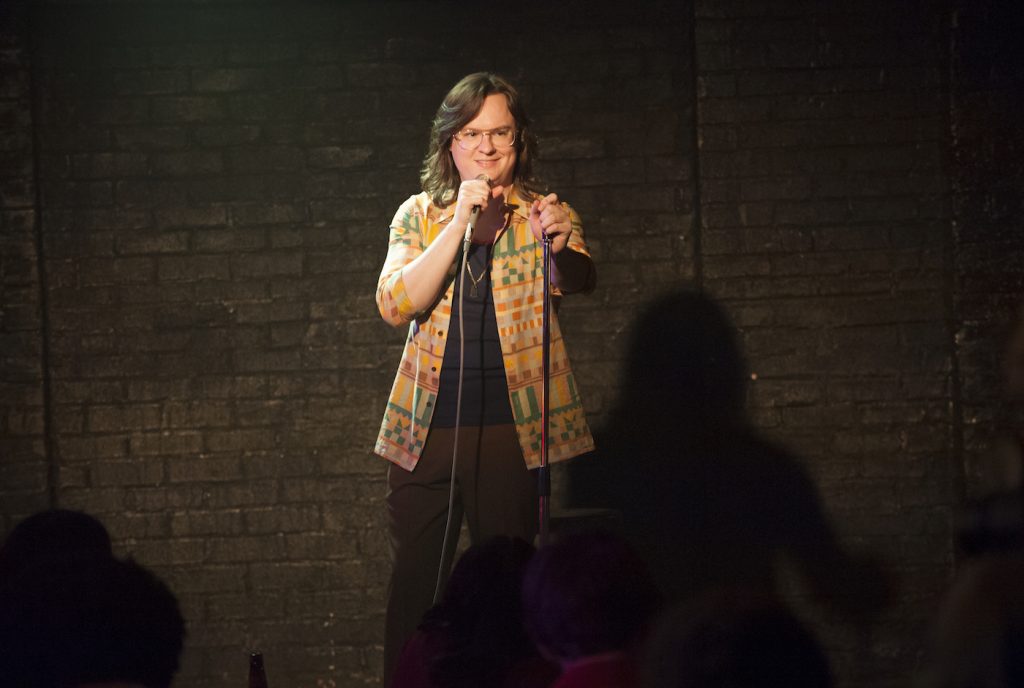 Ron Shack was a struggling comedian who was so broke that he was living in a closet—an actual closet—with his best friend Eddie Zeidel during season one of I’m Dying Up Here.

Now, Ron is enjoying the sweet taste of success in season two of the Showtime drama series that follows standups working at a comedy club called Goldie’s in Los Angeles in the 1970s. In the second season opener of I’m Dying Up Here, which premiered on May 6, we see that Ron has been cast as Benny the mailman on a popular sitcom. With the high-profile television role comes overnight fame and wealth and a cool party pad complete with a pool.

It’s a whole new way of living for Ron. But can the kid handle suddenly being a star and all of the attention and pressure that comes with it? “That’s the area we wanted to explore with Ron,” his portrayer Clark Duke says, noting Ron’s storyline this season was inspired by the experiences of other comedians—guys like Freddie Prinze and John Belushi—who struggled to cope with success.

“This second season has been more overtly dramatic than anything I’ve ever done,” says Duke, who first became known for playing a version of himself in the 2007 web series Clark and Michael, which he created and starred in along with his friend Michael Cera, before going on to roles on the TV shows Greek, Two and a Half Men and The Office and films such as Hot Tub Time Machine 2.

“That was what initially excited me about doing I’m Dying Up Here. I don’t get asked to do drama very much, and I think that was the case for a lot of people on the show,” Duke says, pointing out that the cast includes standups like Erik Griffin and Andrew Santino. “I would say I have definitely—or hopefully—grown as an actor.”

While viewers had no idea that Ron would be the comedian to hit the big time in season two of I’m Dying Up Here, Duke knew the storyline was coming. “It was basically what we had always talked about—we being me and Dave Flebotte and Michael Aguilar, the producers of the show. So the first season, I knew it was a lot of track we had to lay to get to the really fun, interesting stuff with Ron,” Duke says. “I was excited and relieved that we got a second season to tell the story.”

Early on this season, we learn an interesting tidbit about Ron—he is originally from Tennessee, though he and Eddie moved to Los Angeles from Boston. “A lot of that was just me not wanting to do a Boston accent for potentially years,” Duke says of the decision to make his alter ego a native of Tennessee. “I was afraid it might be like tying one of my arms behind my back. I just didn’t want to do a bad ‘Park your car’ Boston impression. I’m also from the South. I’m from a real small town in Arkansas. For me, for the character to kind of mirror my personal journey a little more, I just felt it could only help.”

He praises his co-star Michael Anganaro, who plays Eddie, for his mastery of a Boston accent. “Michael Angarano is so good at impressions, and he’s got a dialect coach, and he just took to it really quickly,” Duke says.

Fans of the show have commented on how natural the rapport is between Ron and Eddie, and there is a reason for that. “Me and Angarano are very close. We’ve known each other since were like 7-years-old,” Duke says, explaining that they both moved to Los Angeles with their families as children to pursue acting. “So all the scenes with me and him are always just a pleasure and very easy, and those are always my favorite ones to shoot, honestly.”

Duke also enjoyed working with Brad Garrett this season. The Everybody Loves Raymond alum joins the cast of I’m Dying Up Here in the recurring role of gruff comedy legend Roy Martin. “He is just a pro, just a wily veteran,” Duke says of Garrett. “He’s such a great, gregarious guy off set, and he’s so, so good in this show. His stuff was my favorite to read in the scripts this season. It just seemed like the writers knew what to do with him in a really fun and exciting way.”

While Garrett has been doing standup in real life since the 1980s and some of Duke’s other castmates are known on the standup circuit, Duke had zero experience as a comedian before he joined the cast of I’m Dying Up Here. “A lot of people seem to think I have,” he says, not sure why that is. “Every question I get about the standup in the show is always prefaced by either, ‘Well, you’re a standup,’ or ‘You come from standup.’ ”

To prepare to play a comedian, Duke hung out at The Comedy Store in West Hollywood before season one went into production “just to soak up the ambiance more than anything,” he says. “I know Michael and Ari [Graynor, who plays comedian Cassie Feder on the show] tried open mics. Once we shot the pilot, I kind of realized I didn’t really have to be a great standup because they were writing the material for me anyway. Plus, Ron is not supposed to be that good. So I quickly let myself off the hook as far as actually trying to do an open mic.”

Is Duke ever nervous when he takes to the stage at I’m Dying Up Here’s Goldie’s to perform standup as Ron? “Maybe I was a little bit at first, but it’s such a controlled environment. There’s no stakes. It’s not real,” he says. “The extras have to laugh no matter what.”