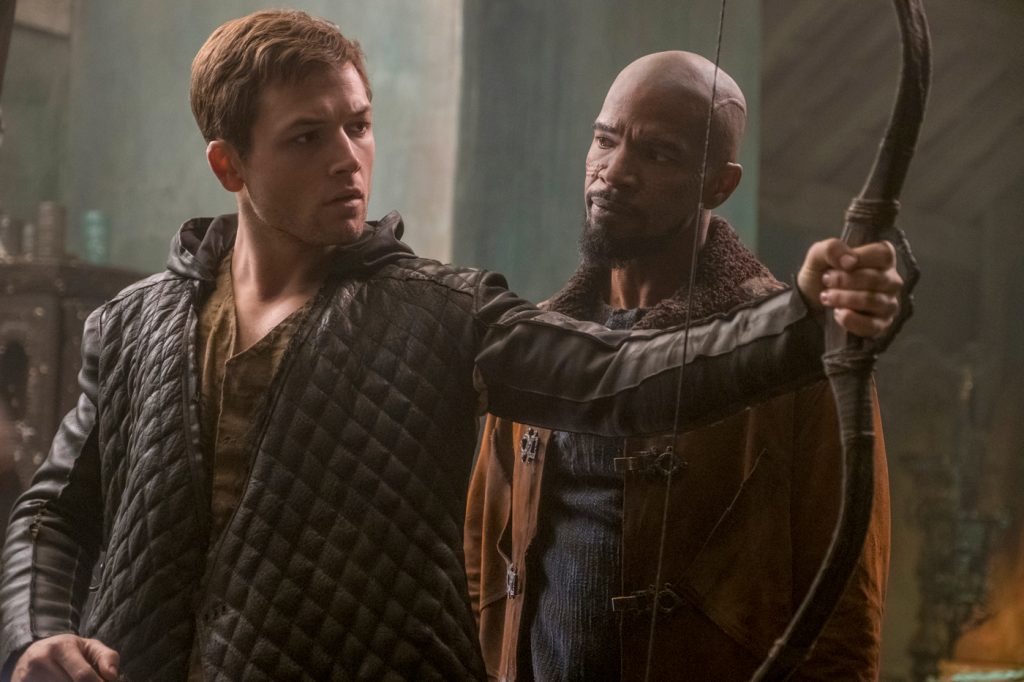 Robin Hood eventually became an outlaw, stealing from the rich to give to the poor. A noble endeavor to be sure, but he had to start somewhere. The first trailer for Otto Bathurst’s Robin Hood origin story reveals the legend actually started his fight right under his enemy’s nose.

Taron Egerton plays Robin of Loxley, and aristocrat by day who fights corruption at night. He actually has close contact with the Sheriff of Nottingham (Ben Mendelsohn), his future arch nemesis. The anonymous freedom fighter battles for the peasants in a hood and cloak concealing his identity.

Working closely with Little John (Jamie Foxx), Robin tirelessly trains with bow and arrow to take out the bad guys. The crown strives to squelch the hope among the commoners that Robin is spreading throughout the kingdom. In a highly arrogant and deviant maneuver, Robin suggests a bounty for the head of the vigilante to throw them off his trail.

The film’s action is highly stylized and literally explosive. This is by far the most vhigh-octane version of the classic ballad we have seen. Robin has a lot in common with the other ‘Caped Crusader.’ Like Batman, Robin conceals his identity with a “wink wink” to his lady love, Maid Marian (Eve Hewson). He flies through the air and possesses superhuman speed and accuracy.

This particular trailer focused highly on Robin and his super smooth fighting skills. The man has confidence and the talent to back it up. Egerton has the perfect swagger for the role and makes the centuries old story fresh and fun again. We wish we had gotten to see more of Rogue One star Ben Mendelsohn in this preview. He is one of the best villain actors around and we cannot wait to see him to head to head with Egerton and Foxx.

The trailer looks like a Game of Thrones, Batman, James Bond mashup. We didn’t even know Robin Hood could be so cool. Sometimes there is nothing better than a refresh on a favorite story, and this could be it.