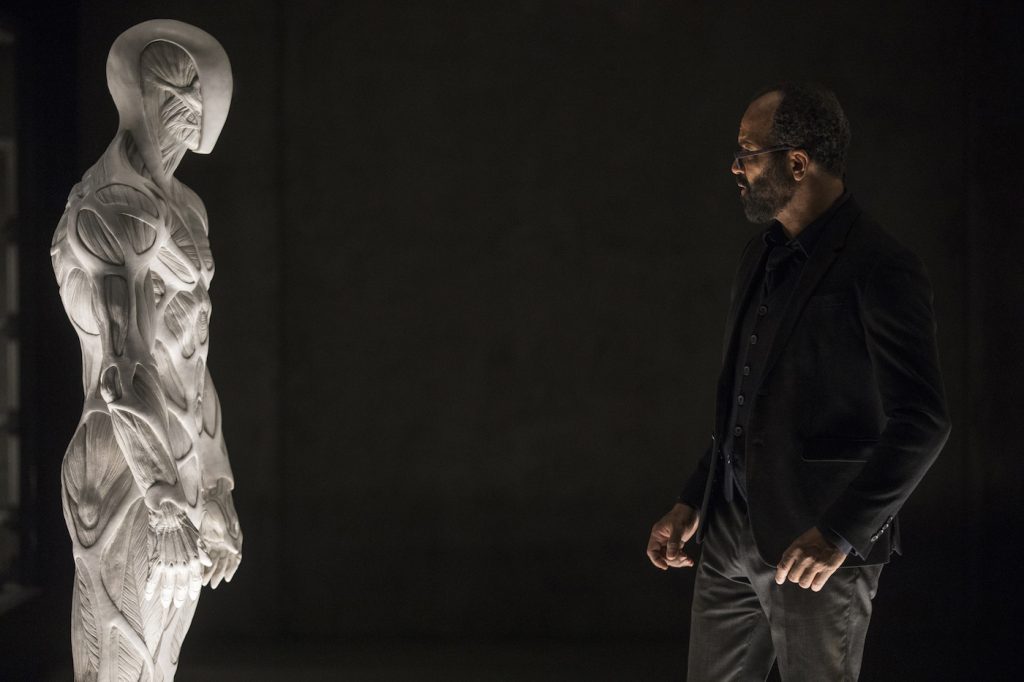 Watch how They Created The Fantastically Creepy Drone Hosts in Westworld

During last night’s bloody, delightfully creepy season two premiere of Westworld, perhaps no new characters made quite as big an impact as the drone hosts. We first encounter on of these faceless, skinless robots coming up behind Bernard (Jeffrey Wright)—utterly silently. Co-creator Jonathan Nolan explains their creation in this great new behind-the-scenes featurette, explaining that the drone hosts offer viewers—and sentient hosts like Bernard—an opportunity to see what the hosts true nature, once you strip all of the deceptively realistic flesh and blood away. The effect is both mesmerizing and unsettling, which could be said of the show itself.

Yet to hear Nolan describe the drone hosts, you realize that these sinister-seeming robots were created with an eye towards self expression as much as to freak you out. “They didn’t have to fool anyone,” Nolan says in the video. “That they could just be this essential version of themselves—which is to say robots, but robots expressed in biological material.”

Westworld‘s production teamed leaned on the skills of folks like production designer Howard Cummings, who took the now iconic host you see being designed in season one’s opening credits, with the “white, muscle-y tissue,” and used that as the base model for the drone hosts. One of the first things Cummings did away with were the host’s eyes, which immediately make the drones seem otherworldly and dangerous.

You might assume the drone hosts would be CGI, but as Westworld‘s on-set VFX supervisor Bruce Branit explains, they’re actually costumed actors. Special effects make-up co department head Kevin Kirkpatrick explains that the costumes are made of foam latex in a massive process of painstakingly crafted detail. Once the costumes have been constructed, its up to a team of very talented actors to slip inside the elaborate, head-to-toe costumes and become the eyeless, earless, massively opposing visions we see on screen. One of those actors is 6’4,” with a 27-inch waist—the costume requires that he wear a corset so that his already incredibly narrow middle can be slimmed even further. Another of the actors who plays a drone host is a former ballet dancer, which has lead to some exquisitely strange moments on set.

“You’ve never seen something as strange and stunning as a drone host doing an arabesque,” co-creator Lisa Joy says.

It’s no joke playing one of these drone hosts, however. “It’s like being sealed in a ziplock bag, I’d imagine,” Joy says of having to wear the all-encompassing costume. Yet the effective is undeniably wondrous and horrible, a balance that few other shows strike quite as well as Westworld.