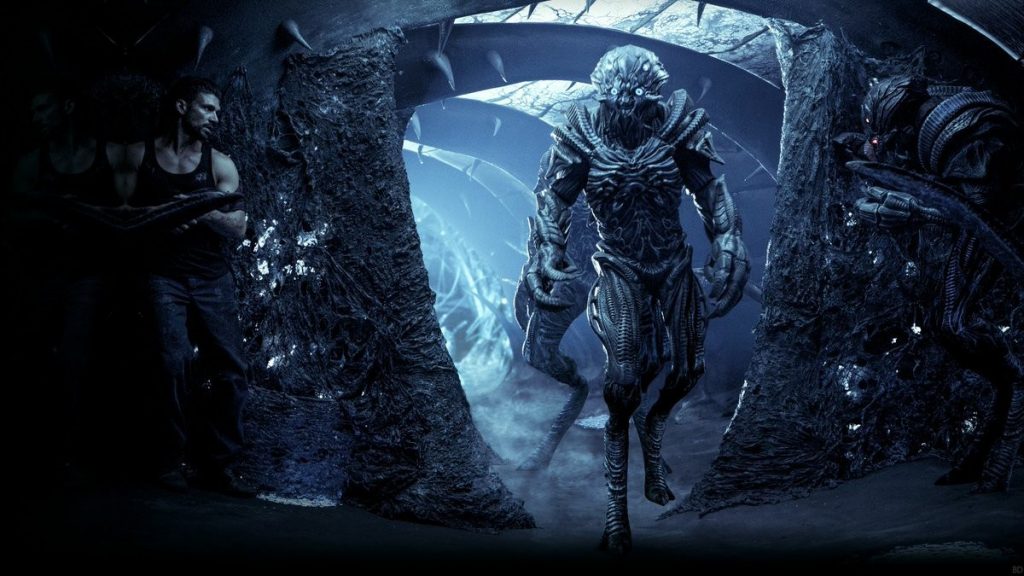 Captain America: Civil War star Frank Grillo will not be appearing in the Avengers’ showdown against Thanos later this month, but he’s been busy battling aliens of his own. Grillo leads the human fight against an intergalactic invasion in Beyond Skyline. The film is something of a family drama with Mark (Grillo) trying to reconnect with his son Trent (Jonny Weston) during the chaos. Composer Nathan Whitehead wrote the eerie and epic score that weaves together a tense father-son dynamic with colossal creatures.

“As far as transitioning from drama and relationship stories into the sci-fi, we had a tune for the Mark and Trent [father and son] relationship,” Whitehead explained. “We tried to find something that could play softly and speak to the family vibe going on, but could also be a heroic when there were big hero moments later in the movie. As the score gets bigger and more aggressive elements come in and mayhem unleashes across the globe with aliens, I tried to still weave in that tune.”

The aliens of Beyond Skyline are certainly not subtle. Enormous monster machines with a bright blue glow, the aliens descend with an unsettling otherworldly tone. It is not a sonic electronic sound, but rather a booming growl.

“In sci-fi and horror movies, I like to use a lot of textures and odd sounds in my scores,” Whitehead said. “A lot of times they do bridge between the sound department and the music department. A good thing for the alien sound in Beyond Skyline was a recording of an elk bugle. The sound they make is crazy. That kind of eerie, howling, whistling sound. It doesn’t match up with the visual.”

To turn the sound effect into a musical instrument, Whitehead needed to transform the elk call into something tonal. He explained that the sound was pitched down then he added reverb and sampled it so it could be played on a keyboard in different pitches. The result is extremely effective.

“There’s so much that we don’t know about the aliens,” Whitehead said. “I like that it might be difficult to put a finger on what this sound is. It sounds futuristic or sci-fi, but it’s not obviously digital. It still has something organic embedded in there. Every sound you hear, whether it’s the orchestra playing or the footsteps, it’s all a piece of telling the story. I like blurring those lines.”

Whitehead doesn’t know exactly how big the aliens in Beyond Skyline are (he estimates between 60 and 80 feet), but they’re certainly big. Their booming presence explodes in giant battle scenes, which he explained were difficult to set to music. His gut instinct in composing music for the main action was to pile on the instruments, but ultimately made a different choice.

“These enormous aliens just duking it out and it’s just a crazy spectacle to see creatures that are this tall doing these crazy combat moves,” Whitehead said. “It’s always an interesting challenge trying to make something sound big. You can pile on a ton of low drones and giant percussion thinking it’s going to be bigger and bigger and it’s going to sound so huge. Sometimes when I’m adding and adding to it, it ends up actually sounding smaller. It’s this weird puzzle of how do I make this have momentum and have a really quick pulse and also just sound enormous.”

The #BeyondSkyline Soundtrack is out! It might harvest your brain. https://t.co/lUh9wh2Xy2

The flashy fight scenes are difficult to miss, but Whitehead pointed out a more intimate moment where the music takes hold. Amidst the chaos, there’s a scene you won’t want to miss.

“There’s a little girl on screen and we play the main tune, basically. The choir is singing and it was just a neat zoom out moment where all this alien battle is going on and then suddenly we have this overhead shot of this little girl walking through the craziness and it’s a cool musical moment. The sound effects die away and the music fills the space and that was just a lot of fun to do that.”

Before writing the music of an alien invasion, Whitehead was scaring people in the hugely popular slasher series, The Purge. The lawless night of murder and mayhem has spawned three sequels with The First Purge opening this summer. Whitehead scored the first three films, setting the sinister tone for the franchise.

“James DeMonaco, the director, has a remarkable attention to sound,” Whitehead said. “And that’s one thing that’s really fun for me because I like marrying sound, design and composition in a lot of what I’m doing. In the Purge movies, it was interesting because those aren’t very melodic scores, but there was still amongst all these textures, there is the world of The Purge and I think we tried to keep that consistent.”

Sometimes less is more in Whitehead’s scores. He’s careful about choosing the right sound in the right moment to avoid cluttering the drama of the film.

“The point isn’t to have a ton of score or to have tons of music in a movie. When I think about it, the point to me is connecting with people, telling stories. The point is organizing and explaining the world that we live in, what it means to be here.”