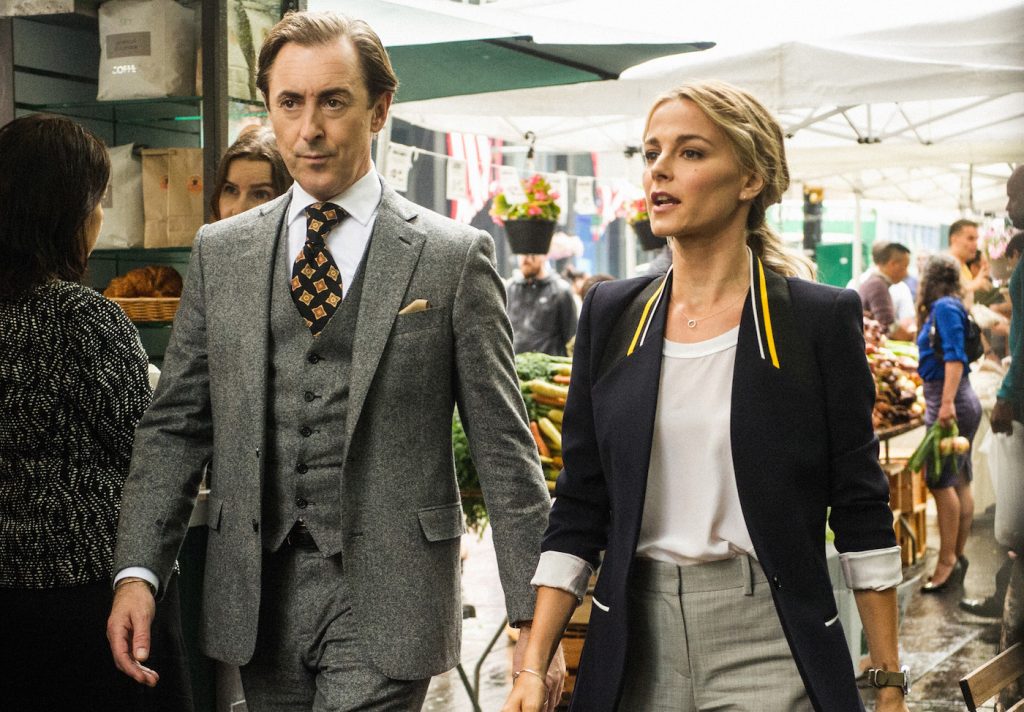 Dan Lawson certainly possesses the gift of garb. The established costume designer is an Emmy nominee for his work on CBS’s The Good Wife, and now brings his winning style to that show’s spinoff The Good Fight. He also is a recipient of the Theater Development Fund’s Irene Sharaff Young Master Award for excellence in costume design — the first to be honored for television.

The Credits recently caught up with Lawson, ever enthusiastic about telling stories through clothes. This interview has been edited for length and clarity.

How did Instinct come your way?

Alan Cumming requested that I do the wardrobe because I’d worked with him on The Good Wife. But the producer, creator of the show, had someone that he had worked with for quite some time before and he wanted that person to do the clothes. You know, out of loyalty, which I completely understand. So CBS switched me over to another pilot. But then, for whatever reason, the designer that the creator wanted was unable to do the project, and since Alan had requested me, CBS switched me back over to Instinct. And as it turned out, the creator of the show and I got on like gangbusters. I had such a good time doing the project.

What I find interesting is your two main characters dress very differently. Cumming’s professor is all vests, ties and jackets and so well coordinated, and the detective is basically monotone and simple.

She was really hard to dress, because, first of all, Bojana is gorgeous and, you know, you want your leading lady to look great. But then there were lines in the script that are like, “Oh, you’re wearing a ho-hum suit or drabby shoes” or whatever the line was, you know basically putting down what she’s wearing. So we had to sort of walk that tightrope of honoring the line and telling the story and at the same time she’s our lead in the show. But basically, I always tell the story. So the way that Alan dresses in the show for the character Dylan, I knew right away how I wanted to dress him. It came off the page for me and meeting with the creator of the show, he was like “love it, love it, love it.” You know the tweeds and the wools and the cashmeres and the plaids.

It was a lot of fun and Alan wears clothes incredibly well. And you know that it helped that Alan and I have a bit of a shorthand, because we have worked together for so long. On The Good Wife, Alan was very plain dressed, very straight-up business suits, very political, dark suits and such. So it was fun to really break away from that, and there’s a trust there.

Since the concept of this show can take the story anywhere, are you dealing a lot more with dressing a variety of characters?

Yes, and that’s really fun as a costume designer, to be able to dress that wide variety of characters. You know, my very first project that I ever designed for television was a project called Third Watch. It was for NBC. What I loved about it was that every episode I felt like I was researching and learning about a whole new part of society or a whole new subject. And I felt like that on Instinct.

Where do you go to find the wardrobe?

I always say I shop high and I shop low, and that means I will go anywhere, from a Salvation Army all the way to Bergdorf Goodman. For Alan, a lot of his wardrobe came from Brooks Brothers, Paul Stuart, Suitsupply. But it also came from Men’s Warehouse, Bloomingdale’s, Saks. Between the pilot and when we started shooting the series — we knew it’d been picked up — I was in London on vacation and I bought Alan clothes while I was there. You know, just wherever I am I’m always thinking about these characters. Now, like for Bojana, the character of Lizzie, I wanted her wardrobe to not just be a straight-up suit and a blouse underneath. I actually got the idea of using jackets, like lighter weight sort of summer jackets as blouses under her suit jacket. It makes it look a little more fun and architectural. Anything we could do to break up her wardrobe and not just have her in a regular suit, so we were buying trimmings and things to add to her outfits.

Do you have a catalog of clothes running through your head?

Yeah, I do, I do. I know what’s in the closet, and then anytime I’m out shopping I always keep my eyes open for everybody. And then, you know, what’s hard is when after a show has gone away and you’re out shopping and you’re like “Oh, gosh, that would be perfect for the queen. Oh wait, that show was canceled.” (laughs) I still shop for Julianna (Margulies) even though she’s not on Good Fight.

Are you always on set when a show is shot?

I go to set if, first of all, I feel I need to be there for the director or the writer or the producer, if I feel like it’s a big scene, even if the clothes are already established. I just feel like I need to be there to help get the story told through the clothes. Usually I’m on set if there are new costumes being established, so I’m there to make sure that the clothes look exactly the way I want them to look and that they go on camera the way I want them to be seen.

How far in advance of an episode are you working?

At the beginning of a season, you’re pretty far ahead. When we started Instinct, well look, we shot the whole season before it even started to air. We finished shooting it right at Christmas time. But on Good Fight, it’s airing now, I think we aired episode two or three and we are working on shooting episode 11, so we’re pretty far ahead, which is nice. But I’ve also been on episodic shows where we’re shooting and you’re two or three weeks out from airing, so as you get closer to the end of the season it starts to catch up on you. You have to pace yourself or you will absolutely burn out.

What do costumes need to provide to an actor?

I think what the wardrobe provides to an actor is truth and honesty. It supports what they do. I always maintain I’m a storyteller. That’s what costume designers do. We help tell the story. If what I do does not ring true, if what the actor is wearing doesn’t ring true, then I’m cutting the actors off at the knees. I’m making their job twice as hard, because visually you as the audience are not believing what you’re seeing. And it’s so important that what I do goes along with how the actor is playing the part, and how the story is being told.

Including if they have to move a certain way.

Exactly. Like Alan in his shoes. He’s a very confident walker in Instinct and it’s really important that he be able to move without any effort in the shoes that I give him. And they still have to look amazing and incredible for that character. I always maintain that I’m only as good as how the actor feels in my wardrobe.

The other thing that I think I bring for an actor is a really good fit. I think they trust me that what I put them in is going to be a good fit and it’s going to work well for them.

How important are accessories?

I think accessories are the fine-tuning to the composition you’ve created, if you will. I feel like those are the elements that really hone in and bring home the characters. It’s so funny that you ask about that, because the details are so important to me.

What makes a project ideal for you as a costume designer? Is it story, cast, crew, location?

I would say story and cast are very important. I mean location is important right now, because I have a family. But really it’s the story. I definitely read pilots and look at projects and think well this really isn’t a very exciting story, is it? Sometimes you do a project because you need a job, and that is really important and completely valid. And sometimes you do a project because you love telling the story. Now I’ve also taken projects because I absolutely love the person who created the show.

I really liked working on Instinct and I loved working with the cast and the crew, the producers. It was really a spectacular project to work on and I’m hoping that the band gets back together again.