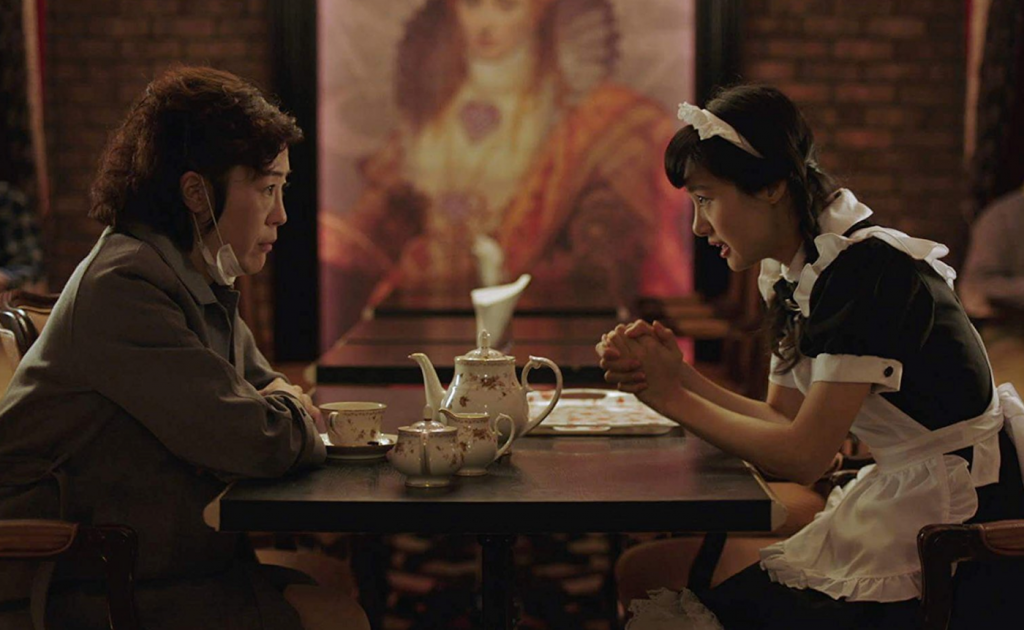 Originally, writer/director Atsuko Hirayanagi’s Oh, Lucy! was written and produced as a short, winning the Jury Prize for International Fiction at the 2015 Sundance Film Festival. Now she has expanded it into a full-length feature, and Oh, Lucy! has just been released across the country to universally positive reviews.

Shinobu Terajima, an A-list actress in her native Japan, was nominated for a Best Female Lead Independent Spirit Award for her role as Setkuko, an aging chain-smoker who lives as a reserved office worker until an English class she attends turns her life upside-down.  Her unorthodox instructor John (Josh Hartnett) gives her a blonde wig and creates an American alter ego for her named Lucy. Thusly begins a strange odyssey towards self discovery that start with Setsuko’s journey to Southern California, where she makes a series of very bad choices that might lead to a better life.

We spoke to Oh Lucy!’s writer/director Hirayanagi about the power of synchronicity, inspiration from her own life, and the difference between filming in the US and Japan.

There is a repeated thread of suicide in Oh, Lucy!  What drew you to that subject, and how did you determine the way to incorporate it into the movie?

That’s a huge problem in Japan.  The protagonist was a definitely a suicidal person, and in a novel you can write that, but in a film it’s all about showing not telling things. She brought all these so-called coincidences to her life because of what she’s going through in the moment.  For me, I believe the character herself brought on repeatedly being confronted by suicide to inspire change.

Is Oh, Lucy! about synchronicity, then?

Definitely. Especially in the first scene of the film, where there’s an interaction that relates to suicide. Why did she happen to be there at that exact moment? But of course to me she brought that experience to herself. She and the other character in the scene share a dark secret, and a feeling of desperation and hopelessness. They both are thinking about just “checking out.”

Actually the whole thing is inspired by something from my own life when I was about 10 years old. I was in the Tokyo subway when a homeless guy, who I remember was covered in what I thought was blood, shared eye contact with me. At that moment I felt like there was a weird connection, and I knew he was going to follow me. Then he did, and I was really scared. I just hurried, bought a ticket, and he was stopped by the station attendant. Somehow that connection I had, I can’t explain it. It inspired me for the opening scene of the movie. Life is so full of those moments. For me there are no coincidences.

You have spoken about working in Japan and the US, and that in Japan they tried to accommodate the American way of filming. What is the difference between the way films are shot there vs. here?

We were doing the so-called American way of filming. The difference is a lot of coverage to show the same scene. You have to do it from many different angles in the US, but not in Japan. In Japan they do one big master shot, and then one or two other angles. There aren’t nearly as many close-up shots or alternate angles. That’s the American way. Actors weren’t used to it, especially Terajima-san, she was used to the world of indie Japanese filmmaking, where they use one or two takes. Even if something’s off, or there’s a problem with the scene, they’d go with it, even if it’s out of focus, because they believe it should be part of the scene. They find a way to incorporate and use happy accidents. I learned to incorporate them, too, when I could. We often did only one or two takes. The American AD was a bit freaking out, and was often asking for one more for safety, especially after spending so much time lighting this beautiful scene or moment only to risk doing it in one take?

The character Shinobu Terajima plays, Setsuko, is very layered. She seems reserved but is chaotic on the inside.

Actually the character is based on someone I know very well, so it was easy for me to imagine how she might be, and how she might live. I could add lots of personal touches to the character. The story is all about how you present masks to the world that are completely the opposite of what’s inside.  There are contrasts of Setsuko’s calm demeanor and the chaos going on inside her mind I try to show, and one way is with the disaster and mess of her apartment. At the office she keeps her poker face and seems together, but really, her life is completely out of control.

Does the person on which Setsuko is based you know about the film?

Oh no! It is a great inspiration, because the actual person would never go to an English class, or undergo the change that Setsuko goes through. I wish they could.  That’s my hope for them, so partly I created the story to imagine them being able to change, and at least try to be happy. Being a storyteller means I can do that, which is great.