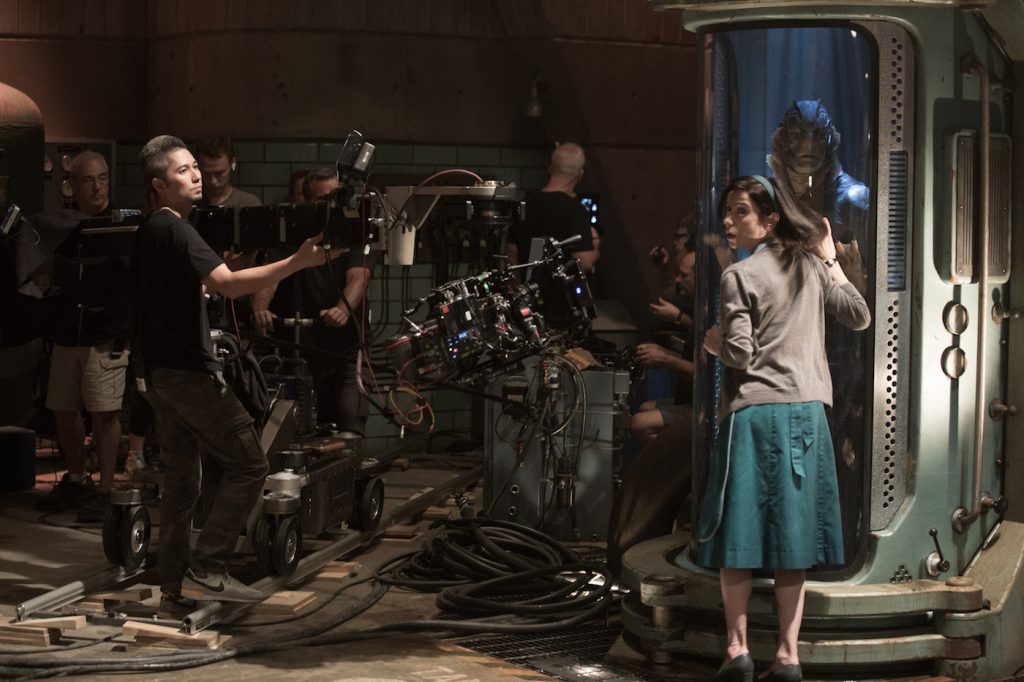 For all its ambitious underwater sequences and that stunning central creature, it’s oddly easy to forget the technical majesty at work in Guillermo del Toro’s meticulous, Oscar-nominated The Shape of Water. Not for its lack of quality, in fact, quite the opposite. The work, which makes every inch of del Toro’s beguiling fantasy possible, is so seamless as to give the impression that even the film’s most outlandish design elements are through some mysterious magic, really unfolding. And swept away on the current of Elisa’s simmering affection for Doug Jones’ curious Asset, it can become difficult to get a full sense of the wizardry at work behind del Toro’s feat of filmmaking.

Mr. X, the Canada-based visual effects company that’s collaborated with the filmmaker on prior projects like Pacific Rim and his TV series The Strain, is the secret force that helped to make del Toro’s grungy fairytale so utterly enveloping: transforming entire scenes shot on dry, traditional sets into submerged, watery sequences and adding imperceptibly human touches to the Asset, turning Doug Jones’ already dynamic performance into one of the year’s most captivating leading men.

It’s nothing short of magic, particularly noting The Shape of Water’s shoestring $20 million budget, on-screen alchemy achieved by an incredibly collaborative post-production process, one that involved regular visits from del Toro and surprisingly minimal CG assists – no motion capture was used to depict the Asset’s movements or heartbreakingly human mannerisms – that ultimately resulted in a film with the kind of layered, lived-in feeling reserved only for film’s very best. It’s perhaps no surprise that to hear the details of the film’s miraculous transformation is to fall in love with The Shape of Water all over again.

The Credits spoke with the film’s visual effects producer Luke Groves to find out how he and the entire team at Mr. X helped project Doug Jones’ incredible performance onto the face of an aquatic creature, turned bone-dry sets into veritable fish tanks, brought expansive detail to Elisa’s cinematic stage, and more.

Guillermo del Toro is a famously detail-oriented director. How did you walk that line between bringing this film to life while preserving del Toro’s in-camera effects?

That’s kind of the key – to use as much as we could get practically as possible and use visual effects to taste. To bring things to life without losing the essence of what was captured in camera, and that was the ongoing discussion as we were shooting and as we were initially turning over, was how far do we get with Doug Jones’ performance and the suit and the prosthetics, and where is the handoff to visual effects to enhance that performance and add more life to it. So it was a very delicate balance. Guillermo, he is in love with the creation of the suit and what it represents and what it looks like, so our job was to really marry into that and respect that down to the finest details. So we were always there to enhance not to replace. And then we round up with situations where we would replace because there wouldn’t be enough articulation coming through the suit itself. So those were ongoing discussions, and every shot was bespoke in that sense, in terms of where we would augment and where we would retain the plate, where we would retain the performance.

So that’s kind of the unique thing about the movie is that every shot was completely different in terms of our approach. And that ranges from simple things like suit fixes, tears in suit, all the way up to full CG versions of the creature. But the area in between, of enhancing the performance was a very tricky balance. It started out always with the eyes and working our way out from the eyes. In initial planning, we didn’t know how much we’d get through the suit but we knew the eyes would be blinking, performing. There were multiple versions of the contacts that could be photographed and used, or the [ones they shot with] would have holes in them so Doug Jones could see and we knew we’d have to replace those. So that’s generally where we would start our work is always with the eyes. And then we would work the performance out to the nose, the mouth, the face and the gills. And I feel like every shot was approached that way, where if we knew we needed to add performance, we’d start with the eyes and work our way out and we would go as far as Guillermo needed us to go to show that full range.

The Asset, for all his fishiness, is still very much a leading man. How did you preserve as much humanity as you could even as you were digitally altering him?

There’s kind of two key points to that: the design of the face was scrutinized and he had to appear handsome and that was a word we used all the time, he couldn’t look like a monster, he had to look handsome and that was baked in to that design. If we over-performed him, he could look monstrous, so we needed to make sure we always retained the handsome outline, where the eyelines were, where the jaw was. So we always had to retain the face, because the face was a leading man’s face. Once we had that, it comes down to the performance and not pushing the performance too far. It’s easy when you have a CG creature to animate the way you would a creature, which is big expressions, big poses, stuff like that. But we didn’t do that, we always talked about what we and Guillermo called microexpressions. And that down to the timing of a blink, how the eye will squint, how many wrinkles in the forehead will happen, how much his nose is constantly flaring and breathing, the subtlety of the dorsal fin and the gills. We had to make sure he still seemed more human than creature, by not going over the top. But that doesn’t mean that made the performance simpler, it actually made it harder, because these microexpressions are frame by frame, pixel perfect things that had to be done, and our animators would have to go through every tiny detail. And that’s what Guillermo was looking for.

I think the thing with the initial retaining the handsome look of the face and not going over the top with the performance except for a few key moments, that really helped to humanize him. And then obviously with his eyes and his eye animation and connection with Eliza, there’s a lot of really subtle eye darts, where his eyes will flick and look at her quickly and then look back down, and stuff like that that really brought it to life. Because that’s what a human would do, your eyes are constantly wandering, and we always had to light the eyes as you would on set, and get hot specular lights in his eyes, put little movements in his eyes so that he’s always thinking, he’s always alive.

Did you work with motion capture to animate the Asset?

We worked with Doug to capture a range of facial performance poses. We have a system that generates, we’d usually have up to 64 face shapes, and we recorded Doug making them – not in the suit but just Doug himself – performing those expressions that we would then take to the Asset and then sculpt themi into the Asset so we knew we would hit the performance he was meaning to portray. We didn’t do any motion capture, though. There was no facial motion capture, we captured those expressions that we built into the Asset, so we would be able to dial in and hit those poses, but every shot in the movie was hand-animated by our team of animators. So no actual facial motion capture whatsoever.

How much freedom did you have in terms of input during the post-production process?

Everything was very much married into it. We would have input in terms of his performance and the mechanics of how things work because the suit itself might not move or perform in a certain way, so we would always retain the design that Guillermo had, but looked for ways of augmenting that suit to perform. But in terms of the design, we were always locked into it. We adhered to a level of scrutiny that was so thorough, every shot Guillermo would want to see every stage of the process to make sure we were retaining that sculpt. Because it’s a creature but it’s also very human in the way the face looks and performs, and it’s a very handsome creature, and we didn’t want to stray from that whatsoever. Part of the workflow was to show where we’re adding performance and where we’re adding expressions, that we had always retained what was created practically so that character was consistent from beginning to end.

Del Toro is also notoriously very involved, from start to finish. Was he more involved than on prior projects and what was his input?

Yes, the workflow was very similar to previous shows that we’d worked on with Guillermo, he’s extremely hands-on. Going back to the fact that we didn’t do any motion capture for the performances, everything was hand-animated, Guillermo would come into the studio on a regular basis, meet with our team of animators and act everything out for them. Those were sessions that we would record and have for reference. He really loves post-production, he loves visual effects. He loves seeing everything every step of the way, so he has no problems coming in. We were doing post down the street, so he had a three-block radius for most days if he was in town. So we had a lot of really direct access to him. And that’s how it had been on previous movies. This one felt a little special, you could tell, because he was in love with the Asset, so he wanted to make sure that everybody that was working had his vision clear and was always striving towards that. So it was very, we might have had more access on this because of that, but the workflow is definitely a hands-on effort that he likes to be a part of, which is fantastic for us.