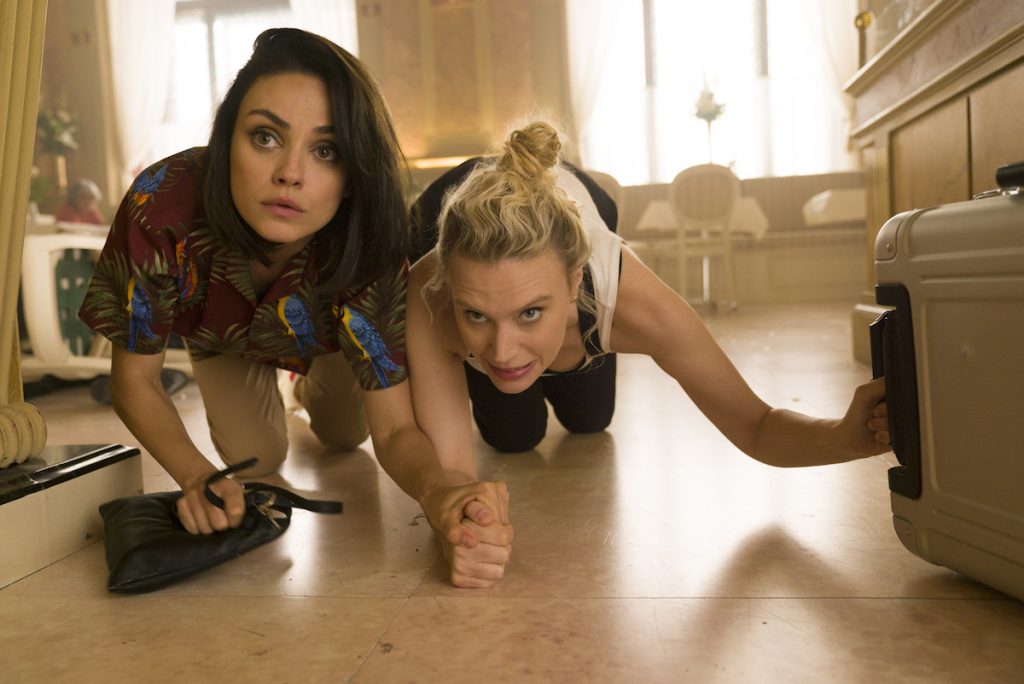 What do you get when you take Saturday Night Live‘s most consistently hysterical superstar and team her up with an actress who has proven her comedic chops time and time again, most recently in Bad Moms? You get The Spy Who Dumped Me, starring Kate McKinnon and Mila Kunis, directed and co-written by Susanna Fogel. Lionsgate has just dropped a new teaser trailer, and yup, we’re definitely excited about this.

McKinnon and Kunis star as Morgan and Audrey respective, two best friends from Los Angeles who find themselves inexplicably mixed up in a life-or-death international conspiracy that would give James Bond pause (or at least ruffle his tuxedo cuffs). It all begins with Audrey’s ex-boyfriend Drew (Justin Theroux) appears at her place, trailed by a bevy of assassins. It turns out that Drew’s in the CIA (Audrey had no idea), and the bad people who are after him are now coming after her. Luckily for Audrey, she’s got Morgan on her side, who is a super spy and mixed martial arts master. No, just kidding, Morgan’s as terrified and seemingly helpless as Audrey is. The key word there is seemingly. It’s your classic fish-out-of-water story, only with two hugely charismatic leading ladies and a slew of hilarious cameos, pretty insane looking stunts, and a Bond-like layer of espionage and intrigue.

Yet once these two get the hang of running for their lives, they find themselves becoming semi-professional spies in their own right, and start fighting back. There are a lot of funny bits in the teaser, including an interrogation scene in which the ladies give their tormentor Nadedja (Ivanna Sakhno) waaaaaay more information then she requires. One bit that Morgan spills about Audrey’s thing for the Minions is definitely something no one else needed to know. Ever. In a million years.

Rounding out the cast are Gillian Anderson, Sam Heughan, and Hasan Minhaj. The Spy Who Dumped Me arrives in theaters on August 3, 2018. Watch the first trailer below.

Featured image: Mila Kunis as “Aubrey” and Kate McKinnon as “Morgan” in THE SPY WHO DUMPED ME. Courtesy Lionsgate