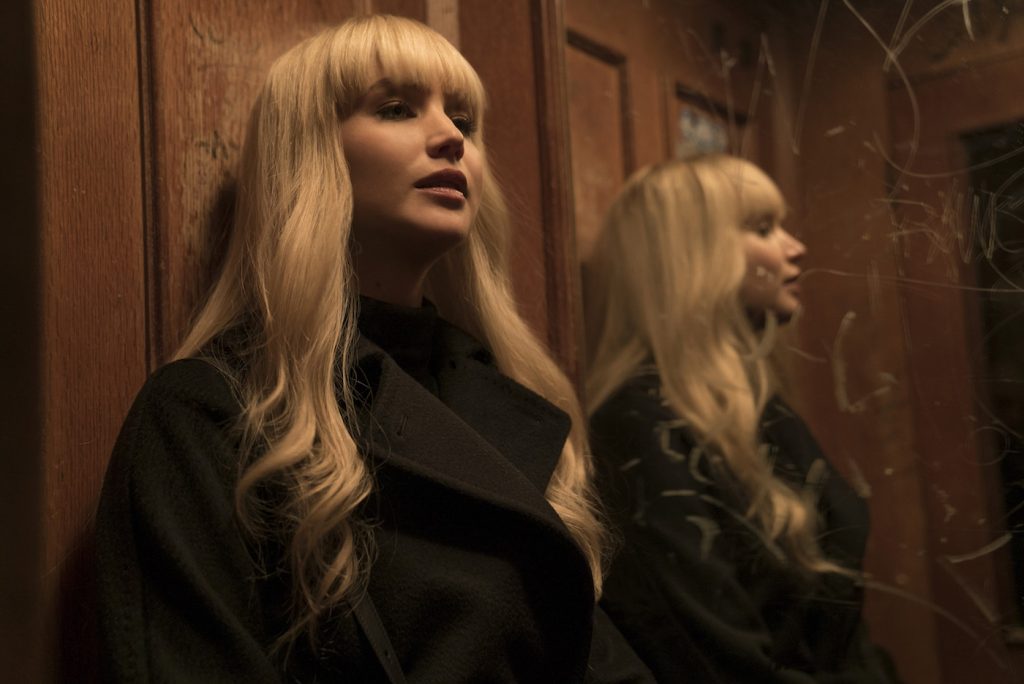 Glimpses of a balletic profile and icy blonde hair are intercut with moments of startling violence—this is Jennifer Lawrence’s journey as ballerina-turned-Russian super agent in Red Sparrow. The films paint a picture of vicious femininity that would understandably incline many to assume that Lawrence’s Russian spy Dominika Egorova is simply one in a long line of big-screen femme fatales. Yet in Jennifer Lawrence’s ultra capable hands (and the actress her most stark), Dominika is actually the beating heart of the film.

Femme fatales absolutely have a place in cinematic story telling; the relative novelty of seeing a woman wield power instead of grappling for it has not yet worn off. One of the most fascinating archetypes in film, femme fatales were first made popular by the film noirs of the 1940s, and have never really left the public consciousness since. From Anne Blythe as Veda in the 1945 version of Mildred Pierce, to Eva Green playing Ava Lord in Sin City: A Dame to Kill For, the trope of the femme fatale is one that is reached for again and again, and audiences clearly know and love the seductive, mysterious, and – above all – potentially fatal type.

Lawrence’s character in Red Sparrow is not that. Or rather, she is not only that. One could easily – and rightly – argue that the point of the eponymous Sparrow training Lawrence’s character undergoes is to craft femme fatales, expert manipulators with an intrinsic sexual appeal. But Dominika refuses to conform to this system, much less the stereotypical path of a femme fatale. In a recent teaser trailer, we see a Sparrow instructor order Dominika to take off her clothes. But rather than reveling in the chance to weaponize her sexuality, we see an incredulous Dominika, an emotion rarely afforded to femme fatales.

There’s a razor-sharp survival edge here too. Dominika’s eerily steady voiceover for the official trailer throws this into sharp relief, detailing her mother’s sickness, and the hard choice she was given after bearing witness to a political assassination for which there could be “no witnesses.” Dominika is scrambling to not only survive the machinations of those in Russian government who would control her, but to protect those she loves and grows to care for. Rather than establishing or manipulating the status quo, we see Dominika grapple with it on several occasions, as men and women in suits issue orders to her from behind desks. Ultimately, Dominika is not driven by a lust for power, or even revenge (at first), but rather by the necessity of survival – something femme fatales are not usually forced to confront.

So too, the hallmark movements of a classic femme fatale are noticeably missing. Sure, we see moments of swaying hips, and seduction, but what truly characterizes Dominika’s on-screen presence is her vulnerability, manifested through moments of hesitation, and the kind of contemplative expression femme fatales are frequently not allowed to reach for. Similarly, while femme fatales often seem to glide above the chaos, pulling strings from afar, Lawrence’s Dominika is in the trenches, landing punches herself and – in one of the trailers – a particularly cringe-inducing blow with a faucet knob.

Finally, there is her American counterpart and fellow spy: Nate Nash played by Joel Edgerton. Make no mistake, this is Dominika’s story. And yet Nate certainly has a role to play, trying to recruit Dominika into committing espionage against Russia. Their relationship certainly bears the signature flavor of a femme fatale ensnaring a victim; we see Dominika following him, flirting with him, and ultimately in bed with him. It is easy to see that she – in classic femme fatale form – lures him into the ultimate dangerous situation, the inherent treachery of espionage and spycraft. But what makes her transcend the femme fatale formula is that she might just be working to help him, or even save him. Her ability to destroy those around her renders her as an ideal femme fatale. But the fact that she has agency, and might elect to not undo the charming Nate Nash is what makes her unique, unable to be placed in any predefined box.

Far from being relegated to the back seat as a plot device, the femme fatale stereotype falls away from Dominika. While this plotline certainly plays with our notions of a femme fatale, Dominika’s depth as a character, and the arc of her struggles prevent her from ever using the stereotype as anything more than a facade. This is not simply a story about what a woman does to a man. It is the dynamic tale of a woman and what she does with and despite and because of men. Perhaps Lawrence’s Dominika Egorova is a femme fatale for today: as feminine and as lethal as ever, but rendered as a multidimensional character capable of the kind of inner turmoil we’ve come to expect from those preyed upon by this long lineage of fatal women.