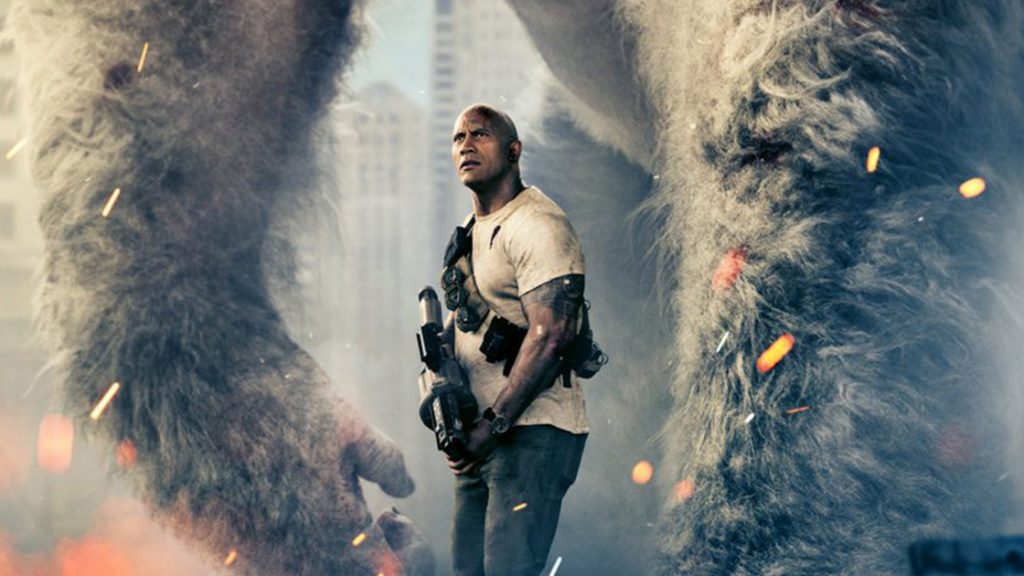 We’re going to go out on a limb and say Dwayne Johnson had fun making Rampage. Directed by Brad Peyton, the Warner Bros.’ adaptation from the classic video game should be nothing but fun, considering its’ source material is one of the most classic arcade games of all time, and not, say, a 19th century novel about land rights in Russia. Rampage is about three monstrously genetically-modified animals that take the title of the film very seriously. They go on the titular rampage, and the world would be lost if it wasn’t for Davis Okoye, thankfully played by someone with a lot of experience in world saving, Dwayne Johnson.

Warner Bros. has gleefully acknowledged the inherent goofiness, and joy, to be had when you embrace a film’s cartoonish roots and go full gonzo. Folks, there’s a giant flying wolf. And kudos to Warner Bros. for letting their giant flying wolf freak flag fly, evidenced in this latest trailer for the film.

Beginning with Dwayne Johnson in the gym, this Rampage trailer tells you why you’d want to see this movie—to watch the superstar run around on screen with colossal, mutant animals. The mutant animals in question look great, especially Davis’s buddy George, the huge white gorilla who also fallen victim to the biological agent that turns living things into monsters. George is little like King Kong, we suppose, only…whiter. Also King Kong didn’t have Dwayne Johnson as a best friend.

When you have a star as charismatic as Johnson, and co-stars as bonkers as a mutant crocodile the size of the entire train from Murder on the Orient Express, you run with it. That’s exactly what Warner Bros. has done here, and its left us fairly giddy to see this film. Yes, the Rock’s going to save the day, and hopefully George survives the tale, too, but the fun isn’t in the destination, but the journey. Watching Johnson react to a huge flying wolf is all the reason we need to go to theater.