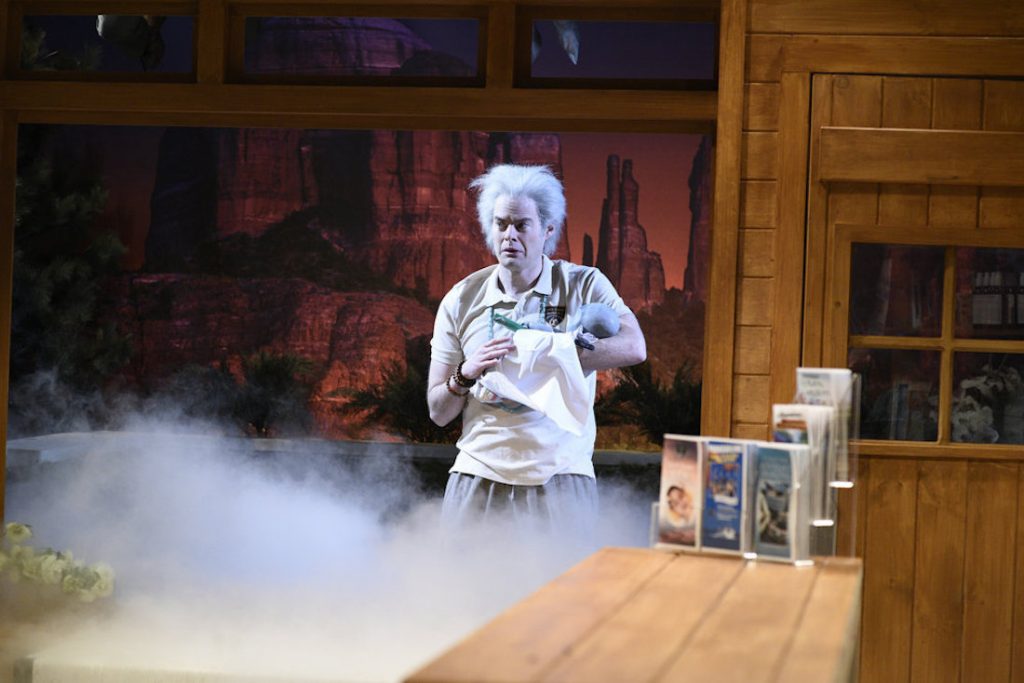 Saturday Night Live alum (and we’d argue, legend) Bill Hader returned to Studio 8H to host SNL for the second time. While his HBO show Barry is getting great notices, it was a joy watching the gifted comedian and actor get back into his SNL groove for the season’s most consistently hysterical show. Hader reprised a couple of his classic characters (Stefon, anyone?), with some legitimately inspired new skits and a few really awesome cameos.

The show began with this sensational cold open, “Anderson Cooper on White House Turmoil.” Hader’s take on Anthony Scaramucci, the White House communications director for all of 10 days, is always a joyous melangé of Italian American stereotypes, all of which the real Scaramucci seems to enjoy deploying himself. The skit gives us an absurd bounty of talent: There’s Kate McKinnon’s incredible impression of Attorney General Jeff Sessions, and cameos from John Goodman as recently fired Secretary of State Rex Tillerson and Fred Armisen as “Fire and Fury” author Michael Wolff. All of these supporting players help round out Hader’s gleeful, clownish Scaramucci in a topical, deeply funny start to the show.

Hader’s funny without saying much in “Girlfriend’s Game Night” as Horace, the incredibly old husband of one of the gals. One of the best parts is watching the cast try, and fail, not to laugh at Horace’s inability to control his wheelchair.

The show took place on St. Patrick’s Day, so the “Irish Dating Show” skit gave us Hader doing his best Irish brogue as a lad whose claim to fame is punching Bono in the back of the head. Aidy Bryant nearly steals the scene with her increasingly perplexed Irish-American contestant.

In “CBC Report,” Hader plays Canadian producer Thomas Logan, who is confronted on the show by a woman (Heidi Gardner) he sexually harassed. SNL‘s wading into the #MeToo movement is, of course, tricky, but the sketch doesn’t shrink the debate for comedy, but rather imagines this crucial dialogue taking place in Canada, a country known for its politeness, and involving a man whose biggest crime appears to be commenting on his assistant’s sunglasses. Yet because he’s Canadian, he resigned for his offensive behavior immediately.