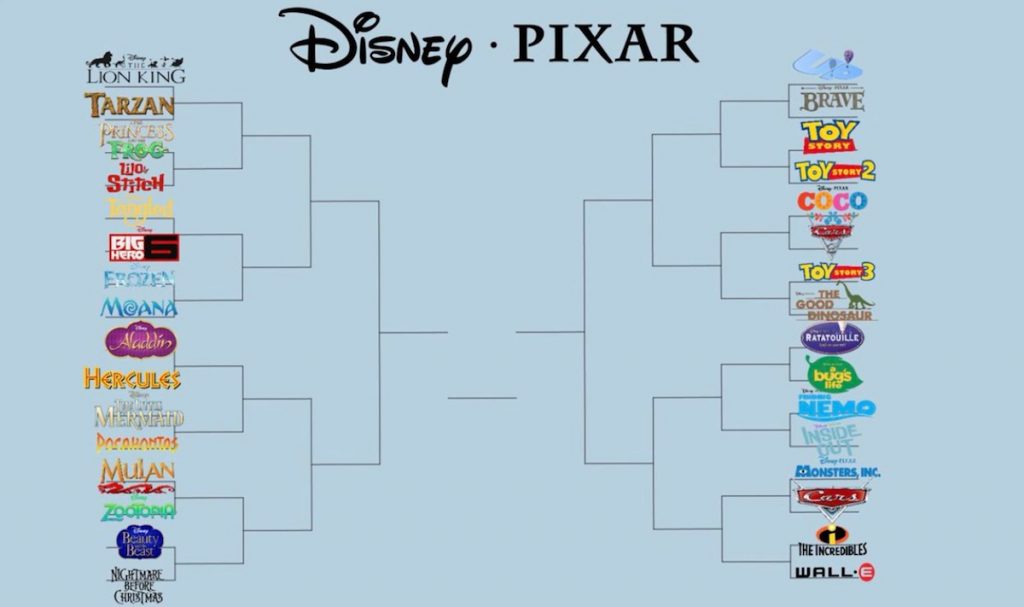 Sometimes, every once in a while, a thing on the internet that everyone is doing or obsessed with is actually quite lovely and harmless. This is one of those times. Everyone has a favorite Disney movie and everyone is prepared to argue why their favorite is the best. If you’re a Lion King person and someone, even a loved one, comes at you spouting off about how The Little Mermaid reigns supreme, there are gonna be words. The same can be said for Pixar films (Toy Story or The Incredibles, both have camps, both get rough). And don’t get us started on the fight between who makes the better animated movies, period, Disney or Pixar? Well, Twitter user @yeeitsanthonyy decided enough was enough and has created the ultimate animated film bracket to help bring this battle to the masses.

The bracket goes beyond Disney vs. Pixar, making you choose between individual Disney films and narrowing it down to your top pick. The process repeats with Pixar until it’s your top Disney film versus your top Pixar film in the ultimate showdown of animated movies.

The bracket was first posted last Thursday night, and it’s, ah, gone the rounds on the internet.  If you thought that March Madness fans were tough and discerning, and rabid about their favorite teams, you need to know now they have nothing on Disney and Pixar fans. Just look at the headline for Keely Flaherty’s BuzzFeed‘s article on the bracket: “I Am Pretty Chill, But This Disney/Pixar Movie Bracket Is Testing Me.” Then the subhead: “Cars 3 is not a better movie than Coco. Put it on my gravestone.”

Once again the internet has descended into chaos. Families are being torn apart, friends you thought you knew are now strangers—in what world does Tarzan compare to the Lion King? People are in a rage and the internet is stressed.

So, who comes out on top? Disney or Pixar? The world may never know, but one thing is for sure, it may be a while before this storm calms down.

Create your own bracket (at the risk of losing a few friends) and tell us, in your opinion, who the true winner is.