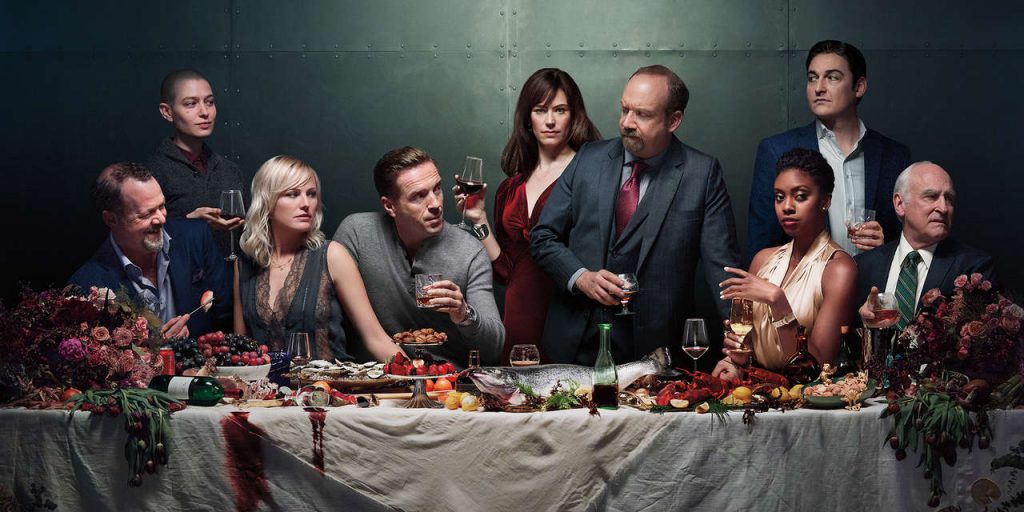 How Billions‘ Production Designer Created the World of the Insanely Rich

Three years ago production designer Mike Shaw needed a change of pace from the lowdown penitentiary aesthetic he created for Orange is the New Black. In Showtime series Billions, Dash went the opposite way by designing the deluxe milieu inhabited by super-rich hedge fund shark Bobby Axelrod (Damian Lewis). “One of the biggest challenges in designing Billions is that a lot of people know what a millionaire’s lifestyle is like, but the billionaire lifestyle is so much bigger,” says Shaw. Axelrod has so much money, the brash broker tells his estranged wife in season three (beginning Sunday), “We’re down to our last $330 million.”

For Billions’ first two seasons, Dash surrounded the show’s financier anti-hero with the types of shiny toys and architecture favored by actual Wall Street moguls. Axe, for example, takes a private helicopter to his sons’ baseball game and races around in a different six-figure sports car every opportunity he gets. “We’re showing that Axe has a garage somewhere with 25 collector cars that he drive whenever he wants,” says Shaw.

The most colorful signifier of Axelrod’s wealth showed up in the artwork adorning his corporate headquarters. After researching numerous Wall Street offices, Shaw noticed that virtually every hedge fund billionaire owned something by acclaimed street artist Jean-Michel Basquiat. Billions features a 10-foot reproduction of the artist’s 12-foot long “Nile” masterpiece. “The Axe Capital space looks so much like a gallery, it couldn’t just be a Basquiat-like painting. It has to be a Basquiat,” Shaw says. “Alot of hedge fund guys collect very expensive art, so the goal for season one was to put together a blue chip art collection that intimidates people when they walk into Axe’s office. We want to hit you over the head with art that’s bold because Axe himself is bold.”

Securing the rights to replicate high-status art pieces was not easy, so Shaw enlisted the Cultural Corps company to negotiate with artists and their estates. “It’s a complicated process,” Shaw explains. “We first we got high-end photographic reproductions of the art, then we’d print it and get the image stretched on canvas. After each season, the contracts stated that we had to destroy the art work. But for Billions, it had to be the real thing by a real artist for this particular space to feel authentic.”

The artwork, which took a more subdued turn in season two to reflect Axlerod’s dark turn of fortune, functions as high-status eye candy in Axe Capital’s sleek corporate offices. Producers found an abandoned office park in Rockland County, upstate New York as a stand-in for the fictional offices in Westport, Connecticut, where many hedge fund managers ply their trade. “We wanted to make Axe’s world very clean and efficient and streamlined,” Shaw says. “There’s not a lot of clutter. Most of all, we wanted Axe’s headquarters to feel magnificent and highly designed.”

Season three Billions, designed by Ed Verreaux (Jurassic World, Looper), continues to find its dramatic friction in the contrast between lean, T-shirted Axelrod and his doughy, three piece suit- encumbered nemesis Chuck Rhodes, U.S. Attorney for the Southern District of New York. “Chuck’s world is everything that Axe’s is not,” Shaw says. “It’s chaotic, the desks are cluttered, and you get the sense that these people locked down like they’re in a bunker. We wanted it to feel claustrophobic so the ceilings are low and we used a lot of traditional wood and beige. It was really important to contrast all of that with Axe Capital, which feel airy and light and modern.”

Shaw knew exactly how a prosecutor’s office actually looks because he got a guided tour of the premises from U.S. attorney Preet Bharara, one of the real-life models for Rhodes’ character. Bharara’s recent career demonstrates the volatile New York City game of political hardball that’s dramatized in Billions. “Preet was very gracious in showing us around,” Shaw adds dryly. “That’s before he got fired.”

Net up for Shaw, he’s devising another utterly different world for AMC’s upcoming drama Lodge 49. “It’s about lovable, eccentric and somewhat bruised people,” Shaw explains. “The place had to feel musty and well worn, kind of like a Tom Waits song, but you also need to feel the glory days when 200 members roamed the tavern. My job was to embrace the beauty of the mundane and create a look that feels timeless and invisible.”