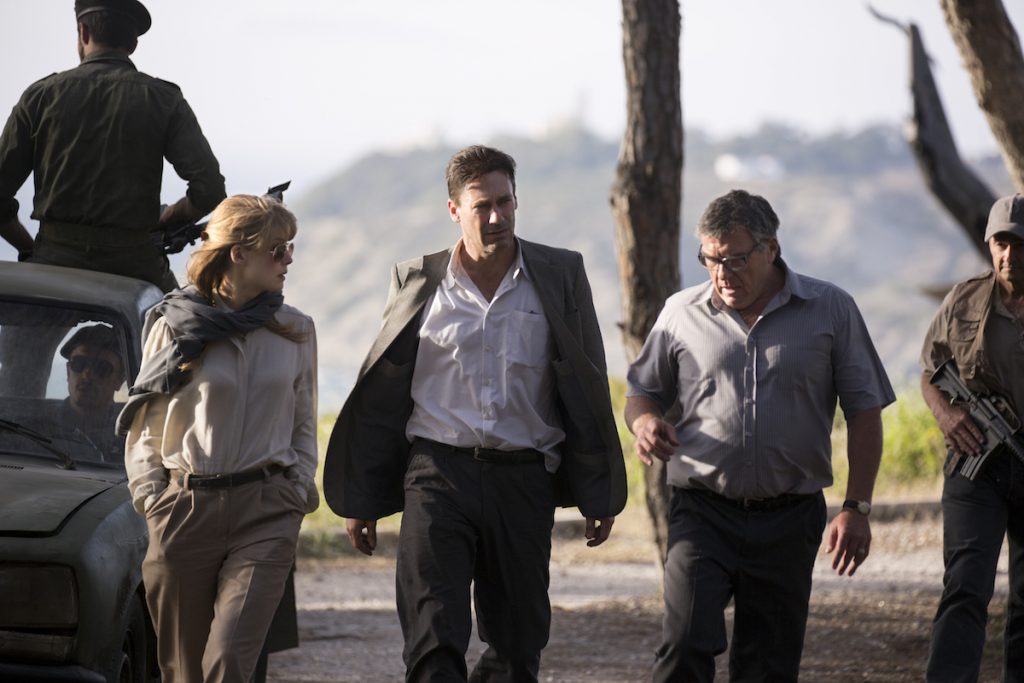 Tony Gilroy might have made his screenwriting debut with the 1992 cult ice-rink romance The Cutting Edge, but for much of his long, illustrious run in the business, he has focused on thrills and action. As both as a writer (the first four chapters of the Bourne franchise, Rogue One: A Star Wars Story and The Great Wall) as well as directing (Michael Clayton, nominated for seven Oscars including director and picture; Duplicity; and The Bourne Legacy), few in the business are as good as Gilroy at quickening the pulse while delivering characters with many shades and subtleties. Arriving in theaters on April 11 is Beirut, based on Gilroy’s script and directed by Brad Anderson (The Machinist, TV’s The Wire). The John Le Carre-like thriller stars Mad Men’s John Hamm as a retired alcoholic diplomat drawn back into action to save a CIA agent being held captive in a war-torn country.

We spoke to Gilroy about Beirut, giving Jon Hamm a juicy antihero role, the film’s initial rocky reception and its ultimate message.

You do for Jon Hamm’s negotiator in Beirut what you did for George Clooney’s corporate fixer in Michael Clayton as far as anti-heroes go. You similarly have Hamm’s Mason Skiles as a distraught family man rather than just a guy always on the make with the opposite sex like Don Draper. It is similar to when Clooney made the switch from being Dr. Doug Ross on TV’s ER to film.

It’s a shame when an actor does great job and gets punished for it. Don Draper was such a strong flavor, no question. The point of origin for the two characters and the actors you mention—they both have that “everything should be easy” look and manner. A confidence to them. I really wanted to scruff that up. Jon sure holds the camera. I wish I could say I cast him in this, but they brought him to me. George, I pursued on my own.

It’s really interesting you say that. I did not realize the connection until I studied up when we went to Sundance and saw it. I’m going to say yes, they are from the Scranton Crowders. I am going to say they are cousins.

You finished this script in 1992, long before you worked on the Bourne franchise and Michael Clayton. Do you think a civil war that took place in 1982 is still relevant now? Argo and maybe Zero Dark Thirty might have gotten audiences more excited about thrillers set in the Middle East in the meantime.

The last draft was finished in 1992. I had done The Cutting Edge by then and worked on a basketball movie, The Air Up There. Producer Robert Cort, the president of Interscope Communications, had been in the CIA and spent a lot of time on set. We talked about the politics of the day and negotiators. I wanted to find something interesting to do by setting something in Beirut in 1982. I worked on it for a year and poured my heart into it. Why didn’t it happen then? Looking back 10 years was kind of close but not close enough. The politics were considered radioactive, anti-Israel, while portraying a mock Reagan White House. It was considered inflammatory. John Frankenheimer (The Manchurian Candidate), before he passed away, told me he wanted to do this thing. But then we hit a roadblock. There was a lot of resistance to the politics. But it eventually became quaint in a way, looking back to 1982. I’m incredulous that it got made after all these years.

When the Beirut trailer first came out in late January, there was a backlash that led to a story in The New York Times. Part of the objection was that only American characters were highlighted. Also, many among the 5 million who viewed the trailer on YouTube noted that Lebanon was not depicted accurately, whether in how natives speak English or the way the country is pictured since it doesn’t have a desert. And some felt the Arab characters were stereotypes. Have the objections abated somewhat now that the movie is screening?

I stand behind my scholarship in the movie, I vetted it three times. It is dead on. It is ironic that the resistance to the trailer focused on the Arabs because it is about a guy who thinks Beirut is paradise. He is married to a Lebanese woman. Then tragedy strikes and paradise is lost. That they thought that this was some horrible view of Beirut, nothing is further from the truth. When it was finally seen at Sundance, that instant reaction to the trailer subsided. It is sad that this happens all the time with movies on social media. Conversation helps a small movie. It isn’t the worst thing in world. But it doesn’t help to have people be angry for no reason.

The filmmakers decided to film in Morocco instead of Lebanon for insurance reasons. And it wasn’t easy to hire Lebanese actors. But I appreciated that Skiles had an emotional stake in the outcome of his assignment since the local boy he almost adopted 10 years before is now on the other side.

Taylor Hackford, who directed my script for Dolores Claiborne, did another film called Proof of Life. It starred Russell Crowe and Meg Ryan and had a big budget. It was set in South America and he struggled to hire a consistent Spanish-speaking cast. Whether they were from Venezuela or Chile, he tried to go for the best actors.

Without getting too political, how will movies be affected by the current state of the world? Will we go back to paranoid thrillers or what? It is interesting to compare All the President’s Men with The Post, which kind of echoes some of the rule breaking, the lying, the challenges to the First Amendment and secret maneuvering that is in vogue now but in terms of the Vietnam War.

I was really caught up working on my Michael Clayton script. Then, 9/11 happened. I had to throw my movie away for a year. It didn’t make sense anymore since I was doing a contemporary story about New York. I picked it back up when I was pissed off about the Iraq War and Bush. The typical gestation period for any film is a couple years. Right now, things are trending more toward period pieces. I know I am sick of technology and cell phones in movies. Currently, we have this need for absolute objective truth. The truth itself is objective and easily found, but I don’t know the narrative version of that. Andy McKay did a great job with that in The Big Short. He pushed a button and out came a great dramatic film about truth and the lack of it.

Your brother Dan— his Nightcrawler, which you produced, was great — is doing a horror thriller for Netflix. What is next for you?

I don’t know. I’ve written a movie for Warner Brothers and a big long-form seven-hour TV thing. I did a lot of writing last year. Now it’s time to go out and get the money and the actors.