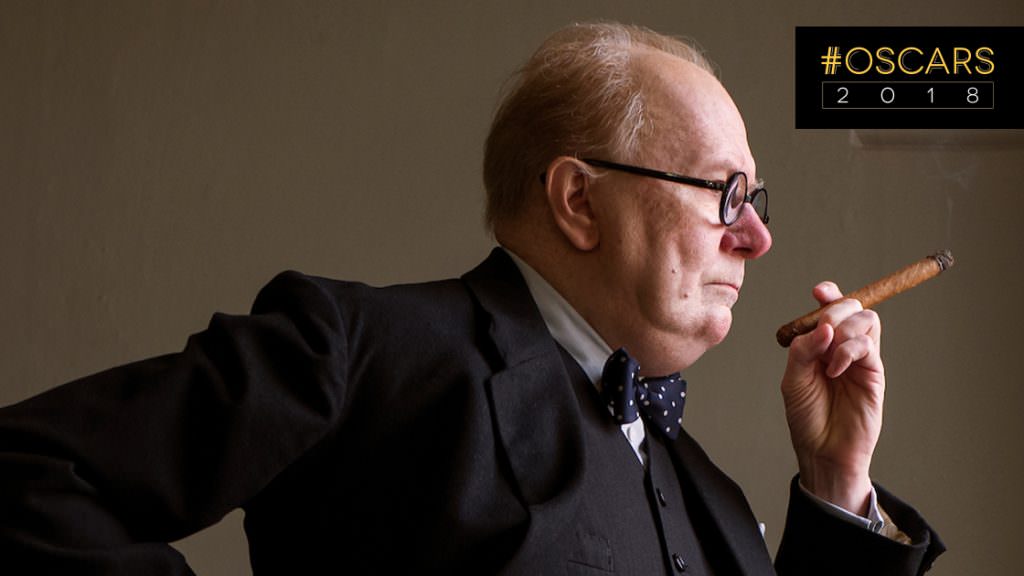 As part of our Oscars week coverage, we’re re-posting our conversations with some of this year’s Oscar-nominees. Gary Oldman is nominated for Actor in a Leading Role, alongside Daniel Kaluuya (Get Out), Denzel Washington (Roman J. Israel, Esq), Daniel Day-Lewis (Phantom Thread) and Timothée Chalamet (Call Me By Your Name).

Ever since making his feature-directing debut with an adaptation of Jane Austen’s Pride & Prejudice  in 2005, Joe Wright, 45, has exhibited great taste in actors, providing Keira Knightley and Saoirse Ronan with some of their best roles. He also is enough of a showman behind the camera to blow the dust off any potentially stodgy period piece, including 2007’s wartime romance Atonement (which contained an incredible one-shot take of soldiers stranded on Dunkirk beach) and 2012’s Russian epic Anna Karenina (which was grandly staged as if it were being performed in a theater).

These two British talents have finally managed to join forces on Darkest Hour, opening on November 22. After making the rounds on the fall festival circuit, Oscar buzz is strong with this World War II drama. The action takes place during the tense period between May and June 1940, as England’s just-appointed prime minister, Winston Churchill (Oldman), must decide whether to sign a peace treaty with Germany as Nazi troops attack Allied forces. Or should he declare war and take up arms against the Fascist regimes threatening to invade. Churchill eventually uses his ultimate weapon, the power of words, to convince the British people to do the right thing and stand up to the enemy.

In Part 1 of this interview, director and star talk about when they first met years ago and why so many other films this year have focused on Britain’s entry into World War I, the events on Dunkirk beach and Churchill.

Did you know each other before you started working on Darkest Hour?

Wright: We met 20 years ago. I’m sure you remember the great actress Kathy Burke. She was a mentor to me when I was younger. When she made Nil by Mouth with Gary (Oldman’s 1997 directing and writing debut film based on his life) and won best actress at Cannes, she invited me to see the film with her. It was me and Kathy in an empty theater and I shook Gary’s hand at the end of the screening and told him what an amazing film I thought it was.

Oldman: And Kathy said, “Oh, this is Joe Wright. He’s my friend. And he is really talented and he’s going to be a really big film director one day.”

I figured Darkest Hour wouldn’t be a typical historic depiction of a great leader during a time of crisis. With those dizzying overhead shots of planes bombing Europe and a restless camera that travels up and down corridors and stairs, you didn’t disappoint.

Wright: I wanted it to play as a political thriller and have that kind of pace and that kind of drama to it. That tension to it. I don’t really like biopics. They only scratch the surface. The only biopic I like is Citizen Kane. Gosh, that is a sweeping statement, isn’t it? I’m not really interested in making a film that is a series of events, like a journalistic “this is what happened in this person’s life.” Citizen Kane has a very specific point of view, which is the duplicitousness nature of character. I wanted to make a film with a very specific idea about what it is about.

I like that your Churchill is someone struggling with doubts about the right course of action. I was thinking about Timothy Spall’s portrayal of him in The King’s Speech. You actually give him a sense of humor. Spall was always grouchy and scowling.

Wright: I’ve seen the film but completely wiped it from my memory. So I don’t really know what you are talking about.

Oldman: The way he is often represented — I love what Anthony McCarten, our writer, says. “It’s as if he was born in a bad mood.” And that he is this sort of curmudgeon with the lips turned down. And we felt that he was someone who was dynamic and youthful, even though he was 65. He had great vitality and energy. If you see some of the footage of him in this period, his face is sort of cherubic. A real sort of cheeky grin and a sparkle in his eyes. All of that. There was this life force around him.

Wright: To the point of mania, I think, at times as well. The collapses that he had, I imagine, were partly because of this manic energy. He was practically bipolar in the sense he had this manic energy and then collapses in and the world is bleak and everything is doomed. Then he manages to crawl his way out and be positive again. 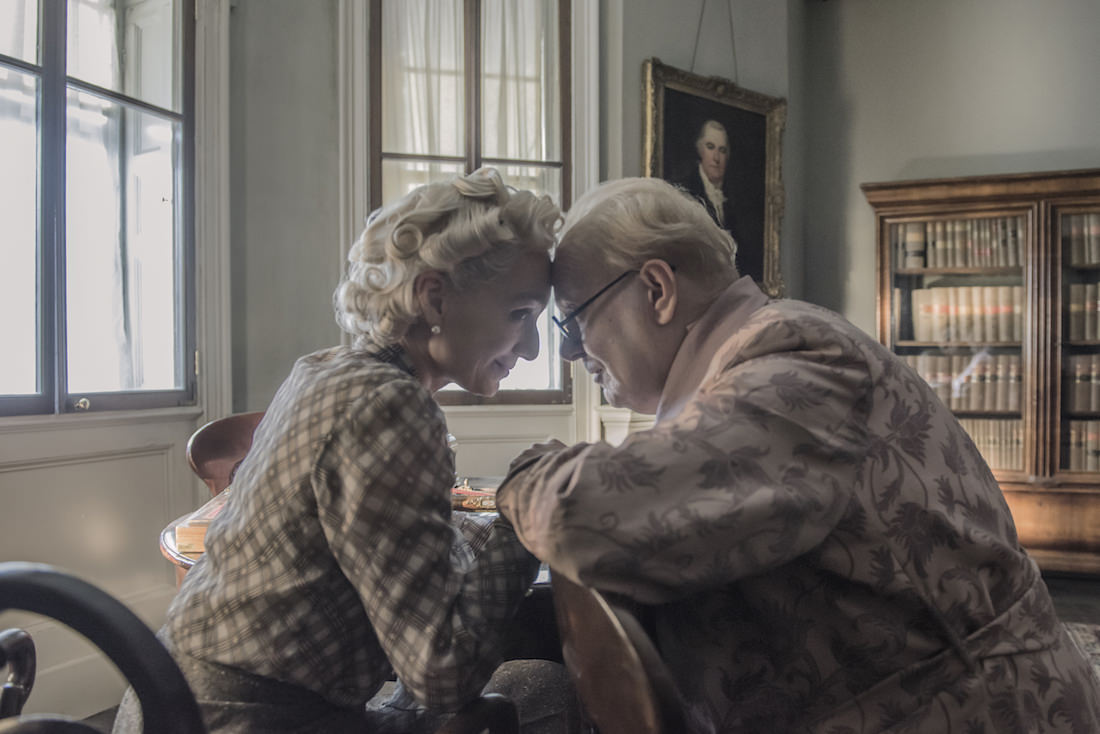 It’s interesting that you already did a version of Dunkirk beach in Atonement and now you have a different angle on it from the sea.

Obviously, Dunkirk and Churchill are having a moment now thanks to your film and others like Dunkirk, Their Finest, the Churchill biopic earlier this year with Brian Cox and even TV’s The Crown.

Wright: Why do you think that is?

England is in a shaky place with Brexit and we are definitely in a shaky place right now with so much division and conflict getting in the way of any real accomplishments. If you are old enough to remember what government is supposed to be like, even under Nixon, it wasn’t this bad. I enjoy seeing government work and politicians lead again.

Wright: What qualities of Churchill do you think made him a good leader?

The fact that he did have doubts about himself and took his choices very seriously in regards to his country. He listened to both sides. He listened to those who opposed him in the War Cabinet and, according this  film, almost decided on a truce  with the Nazis.

Wright: Was there a time when you sided with Halifax, the foreign secretary?

No, because I knew he was Churchill and he would side with the people and declare war. But I could see he was trying to keep the peace at home as well.

Wright: One of the things I find really interesting about Churchill is that he came up with 100 ideas a day and 99 of them were probably bad ideas. But one of them would be genius.

Did you know this would be a timely film?

Wright:  No, no. I always wanted to make a topical film. But I never have. In January 2016, when I started work on the movie, Brexit hadn’t happened, the American election hadn’t happen, the rise of  Marine Le Pen in France hadn’t happened, this terrible guy in Holland hadn’t been around. It was a very different world we were looking at back then and it certainly wasn’t a topical movie. And then as we went into developing the script and went into production, these things started happening. It was important for both of us to try to avoid some kind of opinion piece on contemporary politics. The intention is more to depict a very specific moment in history and a very specific enemy and expressing that time as humanely as possible. Hopefully, audiences will then find the answers for themselves.