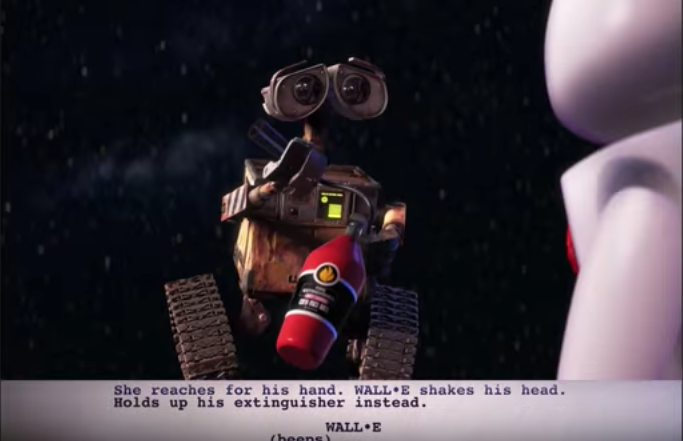 Our favorite animated movies take us on grand adventures to faraway places. Interesting lights, colors, and sounds tell a story. Artists often spend years drawing, rigging, and rendering animations, but they all start in the same way. With words.

Disney and Pixar just released an insightful video that allows you to follow along with the script of Wall-E as one of the most uplifting scenes plays out on screen. The two robots have a limited vocabulary, so little dialogue is written, but they are still dynamically expressive. It’s incredible to see how the action that is written translates to the screen. The animators had a great guide to start with and really expanded their imagination to bring screenwriters Andrew Stanton and Jim Reardon’s words to life.

What’s really magical about the script is that Wall-E only speaks in a series of beeping noises. Although he says very few discernible words, you can always understand his meaning through his actions. The fun part comes in when the beeping is actually translated in the script. Lines like, “I can fly myself” and, “Try that” are easily understandable through Wall-E’s movements. Amazing.

Wall-E is a Pixar classic. It’s a true love story with likeable heroes and an important reflection on human interaction. Relationships can’t be replaced with technology, but technology just might be able to learn to love. The adorable friendship between Wall-E and Eve is heartwarming, and even brings a new perspective to the Earthlings who encounter them. If you haven’t seen this one in a while, it’s definitely worth a revisit.